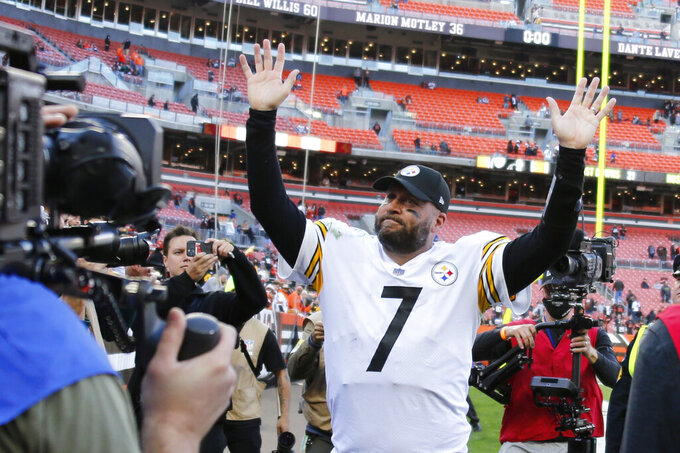 Giants at Chiefs, 8:15 p.m. EDT. The Chiefs have dominated the AFC the past few years, though at 3-4 they’re facing an uphill challenge to make the playoffs this season. But when it comes to facing the Giants (2-5), the Chiefs have been the ones dominated. They have lost 11 of the 14 matchups heading into Monday night’s game at Arrowhead Stadium.

— Starting for the injured Zach Wilson, Mike White threw for 405 yards and three touchdowns in his first NFL start and caught a 2-point conversion pass after the go-ahead score in the Jets' improbable 34-31 win over the Bengals.

__ Jimmy Garoppolo, 49ers, threw for 322 yards and ran for two touchdowns as the Ninerss snapped a four-game losing streak with a 33-22 win over the short-handed Chicago Bears.

— Geno Smith Seahawks, ran for one score and threw two touchdown passes starting for the injured Russell Wilson (finger surgery). He hit his first 14 passes and finished 20 of 24 for 195 yards in a 31-7 rout of Jacksonville.

— Tom Brady, Bucs, was 28 of 40 for 375 yards and four TDs in a 36-27 defeat at New Orleans.. He also lost a fumble and threw two interceptions, the last returned by P.J. Williams 40 yards for a game-sealing touchdown.

Third-string QB Trevor Siemian, Saints, replaced the injured Jameis Winston in the second quarter and completed 16 of 29 throws for 159 yards, a touchdown and no turnovers in that win.

— Elijah Mitchell, 49ers, ran 18 times for 137 yards and a touchdown in a 33-22 win at Chicago. San Francisco won for the first time since beating both Detroit and Philadelphia on the road to start the season.

QB Justin Fields, Bears, carried 10 times for 103 yards and a TD in the loss to the Niners. He also threw for 175 yards.

— Boston Scott and Jordan Howard Eagles, combined for 117 yards rushing and each scored two touchdowns in the 44-6 blowout of the Lions. QB Jalen Hurts had 71 yards rushing as the Eagles ran for 236.

— Steelers rookie Najee Harris had 26 carries for 91 yards and a TD in a 15-10 victory over Cleveland.

— Darrell Henderson, Rams, had 90 yards rushing and two TDs, one on the ground and one on a 3-yard reception in the first quarter, in a 38-22 victory at Houston.

— Jets rookie RB Michael Carter ran for 77 yards and a TD and caught nine passes for 95 yards in a 34-31 upset of Cincinnati.

— Tyler Lockett, Seahawks, finished with 12 catches for 142 yards and DK Metcalf had six catches for 43 yards and two touchdowns in a 31-7 rout of Jacksonville.

— Michael Pittman, Colts, made 10 catches for 86 yards and two touchdowns in the 34-31 overtime loss to the Titans.

— Buffalo’s Tyler Bass kicked a 57-yard field goal against Miami, the fourth longest in team history and third longest at the Bills’ home stadium. He hit a 58-yarder at Arizona last season. The team record is 59 yards set by Steve Christie at home against Miami in 1993. Arizona’s Chandler Catanzaro’s 60-yard field goal in 2016 is longest in now Highmark Stadium.

— Cairo Santos, Bears, made three field field goals to run his club regular-season record to 38 consecutive conversions. He missed an extra point in the fourth quarter and Chicago lost to San Francisco 33-22.

— The Broncos blocked two Washington field goal attempts by Chris Blewitt. Dre’Mont Jones got his hand on a 47-yard try in the fourth period, and Shelby Harris batted down a 45-yarder from Blewitt in the second.

— Falcons linebackers Foyesade Oluokun and Deion Jones excelled in a loss to Carolina. Oluokun had 16 tackles, while Jones, the NFC Defensive Player of the Week last week, had 14 tackles and a forced fumble.

— The Eagles had six sacks for the first time in nearly 10 years. DE Josh Sweat had two sacks.

— Titans rookie cornerback Elijah Molden scored on a 2-yard interception return when Carson Wentz of the Colts threw a weak, left-handed pass late in the fourth quarter when he was about to be taken down in his end zone. Kevin Byard set up Randy Bullock's winning field goal by intercepting Wentz with 5:48 left in overtime. Wentz had thrown one pick all season.

— Leonard Floyd had two sacks and Aaron Donald 1½ as the Rams had a season-high five sacks against Texans rookie QB Davis Mills in a 38-22 win.

— Denver LB Malik Reed had two of the Broncos' five sacks as they beat Washington 17-10.

In the Jets' win, Mike White finished 37 of 45, setting an NFL record for the most completions in a player’s first start. He joined Cam Newton (Carolina, 2011) as the only players since at least 1950 to throw for 400 or more yards in their first career start.

The inept Houston Texans have lost seven straight, their longest skid since dropping the final 14 games of the 2013 season. ... The Rams have won 43 straight games, including the playoffs, when leading at halftime, which is the second-longest streak in NFL history behind a 49-game streak by the Packers beginning in 1926. ... The Dolphins (1-7) have lost seven straight overall to match their longest skid since losing their first seven games of the 2019 season. ... The Bills are to 12-0 against quarterbacks with 16 or fewer starts, which included a 35-0 win over Tua Tagovailoa and the Dolphins in Week 2, and Sunday's 26-11 win. ... The Lions (0-8) go into their bye week as the NFL’s only winless team. ... MIke White's 400-yard passing game was the first by a Jet since Vinny Testaverde had 481 on Christmas Eve 2000, a span of 327 games. ... The Eagles posted their most lopsided road win (38 points) since beating the St. Louis Cardinals by 42 points nearly 40 years ago. ... DE Shaq Lawson set up the winning score with the Jets' first interception of the season. ... Tennessee (6-2) has won four straight to take a three-game lead in the AFC South. ... The Bucs were called for 11 penalties for 99 yards. The Saints were flagged twice for 10 yards in New Orleans' 36-27 victory.

Cowboys QB Dak Prescott was inactive for a game against Minnesota because of a strained right calf muscle. Cooper Rush gets his first career start. ... Saints QB Jameis Winston was carted off in the second quarter against the Bucs with a knee injury that coach Sean Payton expected to be significant. ... Colts DT Tyquan Lewis was carted off the field with a knee injury against Tennessee. WR T.Y. Hilton left in the fourth quarter with a concussion. Indy also lost S Khari Willis (calf). ... Steelers PK Chris Boswell, who earlier kicked a 31-yard field goal, left in the second quarter at Cleveland with a concussion on a fake field goal attempt. The Steelers failed on two passes for 2-point conversions without their kicker. ... Panthers QB Sam Darnold was knocked out of the game at Atlanta with a concussion in the fourth quarter. ... Jets LT George Fant left against the Bengals with an ankle injury late in the second quarter and didn’t return. ... Bucs TE Rob Gronkowski left the Saints game with back spasms. ... Washington C Chase Roullier had his left ankle placed in an air cast in the second quarter in Denver. ... Chargers CB Michael Davis had a first-half hamstring injury and did not return against New England.

The New York Jets’ first-quarter drought is over.

After becoming the the first team to go scoreless in the opening period in its first six games since the 2008 Detroit Lions, the Jets broke through on their first drive against the Cincinnati Bengals on Michael Carter’s 8-yard touchdown run.

The Jets won the coin toss and coach Robert Saleh chose to take the ball. Starting for the injured Zach Wilson, backup Mike White marched the Jets down the field, hitting all seven passes. New York has been outscored 44-0 in the first quarter.

Cleveland defensive end Myles Garrett arrived at FirstEnergy Stadium for the Steelers game dressed as the Grim Reaper, complete with a scythe and the names of quarterbacks he’s taken down written across the back of his cape, including Pittsburgh's Ben Roethlisberger. Garrett finished with four tackles and a sack. Garrett said Friday that he planned to come to the Halloween game in costume.

Browns receiver Odell Beckham Jr. dressed as Michael Jackson from this “Thriller” video. His game wasn't a thriller, one catch for 6 yards.

“I noticed him in the sea of trash that we were floating in today.” — Lions coach Dan Campbell describing his team while praising the effort of linebacker Jalen Reeves-Maybin.

“We’ve got to have our team ready to go,” Bengals running back Joe Mixon said after a loss to the Jets. “Today we just weren’t ready. We came out flat. They wanted it more."