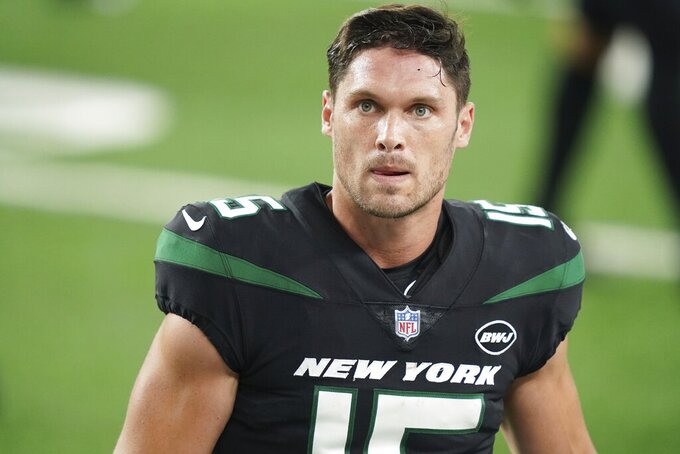 FILE - In this Oct. 1, 2020, file photo, New York Jets wide receiver Chris Hogan warms up before an NFL football game against the Denver Broncos in East Rutherford, N.J. Hogan is trading touchdowns for goals and returning to his athletic roots. The NFL wide receiver, who most recently played with the Jets, announced Saturday, Feb. 13, 2021, he has signed with the Premier Lacrosse League and declared his eligibility to be selected in the league's draft next month. (AP Photo/John Minchillo, File)

Chris Hogan is trading touchdowns for goals and returning to his athletic roots.

The NFL wide receiver, who most recently played with the New York Jets, announced Saturday he has signed with the Premier Lacrosse League and declared his eligibility to be selected in the league's draft next month.

“As many of you know, my roots are in lacrosse," Hogan wrote on Twitter, "and I’m excited to fight for a roster spot with the best in the world!”

The 33-year-old Hogan was a lacrosse star at Penn State, playing on athletic scholarship with the Nittany Lions from 2007-10. He had 57 goals and 14 assists in 43 career games, and was a team captain as a senior.

Hogan was hurt most of his sophomore season, so he had another year of sports eligibility after his final year. Despite not playing football at Penn State, he enrolled at Monmouth and joined the team there — playing quarterback, wide receiver, cornerback and special teams during his one season with the Hawks.

Hogan then pursued an NFL career, signing with San Francisco as an undrafted free agent in 2011. Stints with the Giants and Miami Dolphins followed before he joined the Buffalo Bills, where he got his first regular-season playing experience. After four years with the Bills, Hogan signed with New England — where he was part of two Super Bowl-winning teams in three seasons.

He played for Carolina in 2019 and joined the Jets last season, catching 14 passes for 118 yards in five games before suffering a high ankle sprain. New York waived him from the injured reserve list in December.

Hogan, who earned the nickname “7-Eleven” for his propensity to always be open, has 216 career receptions for 2,795 yards and 18 touchdowns. He would often reference his lacrosse background during TV intros during games.

The Premier Lacrosse League, which merged in December with Major League Lacrosse, is scheduled to hold its entry draft on March 25. Hogan will be eligible to be selected by one of the league's eight teams among the 24 picks over the draft's three rounds.