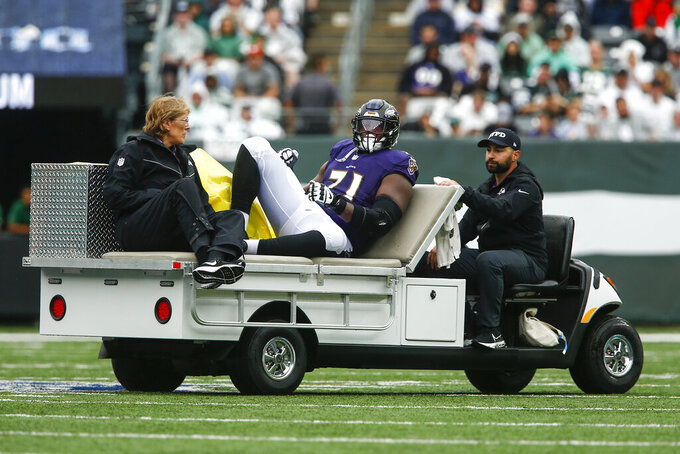 Baltimore Ravens offensive tackle Ja'Wuan James (71) is carted off the field during the first half of an NFL football game against the New York Jets, Sunday, Sept. 11, 2022, in East Rutherford, N.J. (AP Photo/John Munson)

OWINGS MILLS, Md. (AP) — Lamar Jackson and the Baltimore Ravens are out to show last season was an aberration.

A drama-free victory in Week 1 was an early but meaningful step toward doing that.

The Ravens cruised to a 24-9 win over the New York Jets on Sunday. Coach John Harbaugh improved to 11-4 in season openers. Only the Philadelphia Eagles have been better at getting to 1-0 over the past 15 years.

Last year was a rare loss for Baltimore in an opener — an overtime defeat at Las Vegas that in many ways set the tone for the season. The Ravens dealt with major injury problems in 2021, and a dozen of their games were decided by six points or fewer. Then the offseason included the protracted uncertainty about Jackson's next contract.

Two days before facing the Jets, the Ravens announced that they would revisit contract talks with Jackson next offseason, putting that issue on the back burner for now. Then the team showed up in New Jersey — not completely healthy, but healthy enough — and dispatched the Jets in fairly routine fashion.

“It’s hard to win in this league,” defensive end Calais Campbell said. “To get a win to start the season off, that’s a good feeling.”

That's not to say the Ravens don't have concerns. They lost tackle Ja'Wuan James to a torn Achilles tendon — the same injury that kept him out all last season. Harbaugh also announced Monday that cornerback Kyle Fuller is out for the season after injuring his left knee.

The defense impressed in its first game under new coordinator Mike Macdonald — the defensive line in particular.

“They'll be the position group of the week for sure,” Harbaugh said. “They were dominant.”

When the Ravens lost running backs J.K. Dobbins and Gus Edwards for the season with knee injuries last year, they signed several veterans to replace them. Dobbins and Edwards still aren't back, and this time Baltimore added 28-year-old Kenyon Drake to the mix late last month.

Drake led Baltimore in rushing, but had just 31 yards on 11 carries Sunday.

“He's still learning the offense,” Harbaugh said. “There's carryover, but it's not the same from team to team.”

Dobbins has been at practice recently and could be back soon.

Devin Duvernay was an All-Pro last season because of his work as a returner, but the Ravens could use some contributions at receiver from the third-year man. He delivered in the opener with a pair of touchdown catches.

After trading Marquise Brown in the offseason, Baltimore will likely lean more on Rashod Bateman in the passing game — and he caught a 55-yard TD against the Jets — but Duvernay's emergence may be an even more encouraging sign.

Rookie tight end Isaiah Likely was very impressive during the preseason, but he didn't have a single catch in the opener despite being targeted four times. He also had a holding penalty.

James started at LT because the Ravens are still waiting for Ronnie Stanley to return from lingering ankle problems. Harbaugh was asked if the team might look for external help at that position now.

“There's a lot of moving parts that go with that — where we're at with our team, what's out there, those kind of things,” Harbaugh said. “We'll continue to talk about those things.”

2 — The number of third-down conversions by the Jets on 14 attempts. New York actually finished with 24 first downs to Baltimore's 13, but the Jets couldn't keep enough drives going to stay in the game.

Baltimore hosts Miami on Sunday. The Dolphins beat New England 20-7 in their opener.

The Ravens lost 22-10 at Miami last November in an early sign of trouble before Baltimore faded down the stretch. That game was also the second of seven consecutive wins for the Dolphins — a run that nearly landed them in the playoffs.