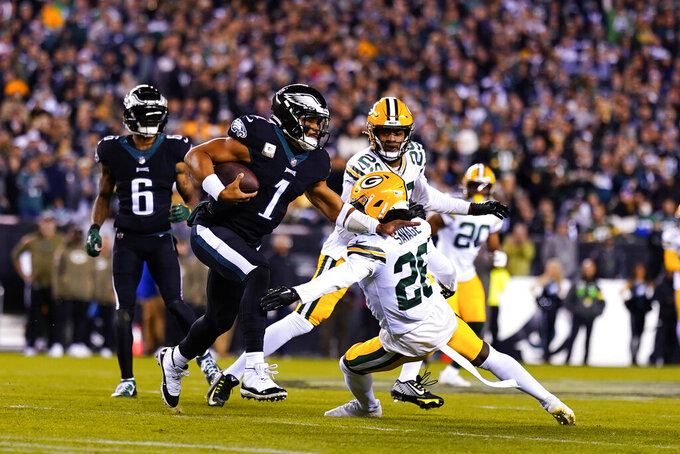 GREEN BAY, Wis. (AP) — This was supposed to be the season that the Green Bay Packers showed they could win by leaning on their defense rather than relying on their offense to carry them.

“I wish I knew,” Barry said. “I’ve stayed up many nights thinking about that, and I wish it was one specific thing that I could put my finger on.”

Green Bay (4-8) is limping into the final third of the regular season at least in part because its defense hasn’t come close to delivering on preseason expectations.

The Packers brought back most of the key players from a defense that didn’t allow a touchdown in a 13-10 playoff loss to the San Francisco 49ers. They used both of their first-round draft picks on Georgia defensive teammates, taking linebacker Quay Walker and lineman Devonte Wyatt.

All those moves haven’t paid off.

Green Bay is coming off a 40-33 loss at Philadelphia in which it allowed 363 yards rushing, the highest total the Packers had given up in a single game since 1977. Philadelphia’s Jalen Hurts rushed for 157 yards, the highest single-game total ever for an Eagles quarterback.

Matt LaFleur, in his fourth season as Green Bay’s coach, said the Packers missed more than 20 tackles and called it “by far our worst tackling performance that I’ve seen here.”

“It was unfortunate, because I think for the most part we’ve tackled fairly well this year,” Barry said. “I think we had a great tackling year last year. So that’s the thing that’s unfortunate. ... I scratch my head a little bit, to have a performance like that.”

Next up for the Packers is a trip to Chicago (3-9) to face the Bears, who have an NFL-leading 192 yards rushing per game.

Quarterback Justin Fields missed Chicago’s previous game with a shoulder injury but practiced fully Thursday, an indication he likely will be available to face the Packers.

Playing another run-oriented team at least gives Green Bay’s defense an opportunity to prove it’s better than it looked at Philadelphia.

“To be honest, when you have a showing where you don’t play how you want to play, it doesn’t matter who you play,” safety Adrian Amos said. “You just want to get back out and play and show something else.”

Green Bay’s run defense hit rock bottom in Philadelphia but has struggled all season. The Packers rank 31st in yards rushing allowed per game (154.8) and 29th in yards allowed per carry (5.0)

Outside linebacker Rashan Gary played just nine games before a knee injury knocked him out for the remainder of the season, yet he still has a team-high six sacks. Cornerback Eric Stokes isn’t expected to play again this season after injuring his ankle and knee the same day that Gary got hurt.

De’Vondre Campbell, an All-Pro linebacker last season, has missed four games with a knee injury, but is practicing on a limited basis this week. Safety Darnell Savage suffered a foot injury against the Eagles and hasn’t practiced this week.

But the Packers also simply haven’t been effective enough this season. Every Packers defensive player who started at least five games for Green Bay in 2021 has seen his Pro Football Focus rating drop from last season to this season.

Barry calls his defense “a resilient, tough bunch” and notes that they’ve kept practicing hard amid adversity. They’re eager to put that Eagles game behind them and show they’re better than their recent results.

“We’ve got a chance to redeem ourselves and play Packer football,” defensive lineman Jarran Reed said.

NOTES: QB Aaron Rodgers was a limited practice participant Thursday after sitting out Wednesday’s workout. Rodgers, who left the Eagles game with injured ribs, has said he expects to play Sunday. ... WR Romeo Doubs (ankle) also practiced on a limited basis as he attempts to return after missing three games.