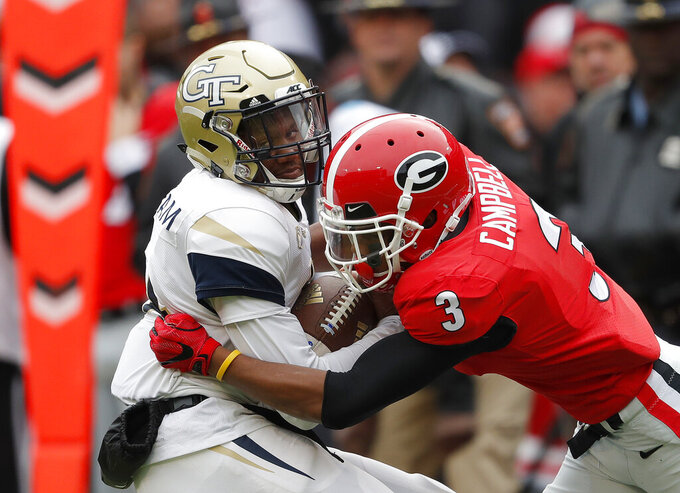 FILE - In this Saturday, Nov. 24, 2018 file photo, Georgia Tech quarterback James Graham (4) is tackled by Georgia defensive back Tyson Campbell (3) after a catch in the second half an NCAA college football game in Athens, Ga. Daniel Jeremiah noted that Georgia teammates Tyson Campbell and Eric Stokes plus Florida State’s Asante Samuel Jr. as cornerbacks who could still be available early in the second round. The Packers could use some cornerback help and also would like to boost their depth on both sides of the line of scrimmage. (AP Photo/John Bazemore, File)

The Green Bay Packers passed up an opportunity to provide another weapon for disgruntled star quarterback Aaron Rodgers and instead boosted their secondary by using their first-round draft pick on Georgia cornerback Eric Stokes.

Stokes, a 6-foot-1 cornerback, went 29th overall Thursday night. He had a team-high four interceptions for Georgia last season and returned two of them for touchdowns.

“You basically get a person that's hungrier than ever and is coming in to just do anything he can to help the team,” Stokes said. “It doesn't matter what it is. I'm going to make sure that I learn, come in and do everything I can do and just keep improving as a player, because I know for a fact that I really want to help this team win, so I'm going to do everything in my power to (help that)."

The selection of Stokes was overshadowed by Rodgers' uncertain future.

Hours before the draft, ESPN citing sources it did not identify reported that Rodgers doesn’t want to return to the Packers. The report said the Packers have offered to extend the reigning MVP's contract and that team executives and coach Matt LaFleur have met with Rodgers during the offseason.

General manager Brian Gutekunst responded to the report by saying “we are committed to Aaron in 2021 and beyond.” Gutekunst reiterated those remarks after the first round wrapped up, too.

“He's our quarterback,” Gutekunst said. “He's our leader. We've been working through this for a little while now. I just think it may take some time, but he's the guy that kind of makes this thing go. He gives us the best chance to win and we're going to work toward that end.”

The situation didn't prompt the Packers to look to the offense on Thursday. The Packers haven’t used a first-round pick on a wideout, running back or tight end since selecting Florida State receiver Javon Walker at No. 20 overall in 2002.

Rather than concentrating on offense in the first round, the Packers addressed one of their biggest positional needs.

Stokes should help in that regard.

“Just a rare athlete with premier speed and just a good kid,” Gutekunst said. “We're excited to add him to our group and see what he can do this season.”

Stokes already is a big fan of Alexander and considers him one of the NFL's elite cornerbacks.

“If he ain’t one of the best, he is the best in the league," Stokes said. “I just constantly watch him. He’s just a dog.”

Green Bay has nine more picks left in the draft. The Packers have the No. 62 and No. 92 overall selections on Friday. They have two picks each in the fourth, fifth and sixth rounds plus one more in the seventh round.

But the Packers' top priority now involves repairing their relationship with Rodgers.

“I think you’ve got to keep in mind how much we want Aaron to be here, how important he is to our organization," Gutekunst said.

Rodgers’ long-term future has been a topic of speculation ever since the Packers traded up four spots in the first round a year ago to select Utah State quarterback Jordan Love. His would give the Packers a potential successor on the roster if they decide they must deal Rodgers, who has three years left on his contract after signing a four-year, $134 million extension in August 2018.

The Packers are looking to take the next step after each of their last two seasons ended with NFC championship game losses.

They just need to worry about whether they can hang on to their three-time MVP quarterback.