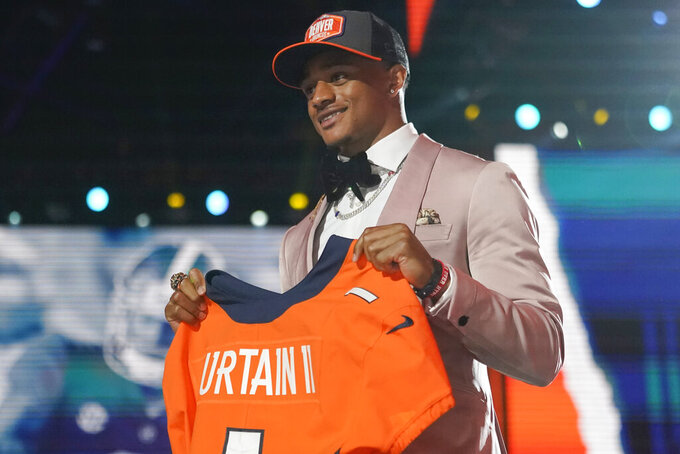 Alabama cornerback Patrick Surtain II holds a team jersey after he was chosen by the Denver Broncos with the ninth pick in the NFL football draft Thursday, April 29, 2021, in Cleveland. (AP Photo/Tony Dejak)

ENGLEWOOD, Colo. (AP) — George Paton spent almost a quarter-century preparing to run his own NFL draft, and the first-time general manager spackled several of the Denver Broncos' roster cracks with his inaugural class.

What he didn't directly address was his most pressing need: For the third time in five years, the Broncos had a top-10 pick and didn't select a quarterback.

Skirting Justin Fields and Mac Jones in Round 1 after Trey Lance went off the board leaves Paton open to carping from a flustered fan base that's grown weary of middling QBs in the five long years since Peyton Manning retired.

That exasperation will only ease if one of three things transpires:

— Teddy Bridgewater, acquired from Carolina for a fourth round pick on Wednesday, rediscovers his Minnesota mojo after an unsuccessful season with the Panthers.

— Drew Lock puts aside Denver's acquisition of Bridgewater and offseason interest in Matt Stafford and Deshaun Watson and morphs into an accurate ace after an awful 2020 season.

—The Packers have a change of heart and send reigning MVP Aaron Rodgers out west, where his fiancée, Shailene Woodley, has a home in Boulder about 30 miles from Empower Field.

Maybe all three of those scenarios are long shots, but Paton did bolster his offense, pad his defense and stock his special teams with his maiden draft class.

“It was everything I'd imagined, there really were no surprises," Paton said.

Other than his own: not drafting a quarterback. But he insists he's fine with what he has.

“I like our room right now,” Paton said. “Teddy and Drew, they're going to have a great competition."

Paton's first draft began with his surprising selection of Alabama cornerback Patrick Surtain II with the ninth overall pick. He added versatile linebacker Baron Browning of Ohio State in the third round.

He grabbed bruising North Carolina running back Javonte Williams in the second round and picked up a potential gem in Quinn Meinerz, a guard from Division III Wisconsin-Whitewater in Round 3.

Paton used five of his six selections Saturday on defense, beginning with fifth-round safeties Caden Sterns of Texas and Jamar Johnson of Indiana.

Seven of Denver's 10 selections were on defense, but coach Vic Fangio said that wasn't by design; it just fell that way.

What was a driver in Saturday's selections was beefing up special teams.

“Tom McMahon, our special teams coordinator, evaluated just about every player in the draft, so we targeted players that he liked," Paton said.

It's not just the Day 3 picks who will be making their mark in the kicking game. While the Broncos don't know whether Browning will play inside or outside linebacker — or both like he did at Ohio State — they're sure of one thing: “We know the minute he walks in the door, he’s going to be a hardcore special teamer,” Paton said.

Other takeaways from Denver's first draft class in a decade that wasn't assembled by franchise icon John Elway:

“That will be a competitive position group this training camp, for sure,” Fangio said.

Paton may be a novice GM but he pulled off the biggest surprise at the top of Round 1 by selecting Surtain when many mocks had him picking a quarterback.

Paton was just starting his NFL career as a pro scouting director in Miami when Surtain's father, Patrick Surtain Sr., was embarking on his 11-year NFL career.

“We’ve been watching this kid for three years,” Paton said. “I knew the family; I knew the dad and I knew where he came from. We tried to hide our interest a little bit."

Johnson was the first Hoosiers safety selected first-team All-Big Ten since Eric Allen in 1996. He had four interceptions in eight games and picked off Fields twice in Indiana's 42-35 loss to Ohio State in November.

“That game was really important for me and my career," said Johnson.