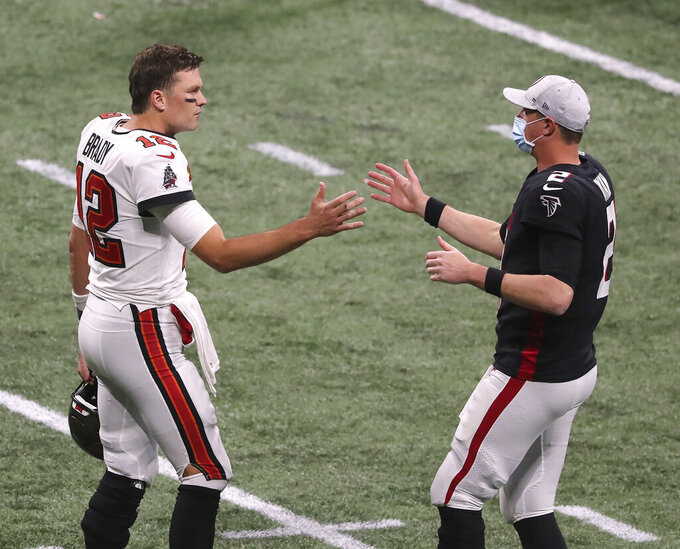 ATLANTA (AP) — Even as they've secured their first season with at least 10 losses since 2014, the Atlanta Falcons continue to be the masters of false hope.

The Falcons blew leads of 17-0 and 24-7 in Sunday's 31-27 loss to the Tampa Bay Buccaneers. It was Atlanta's fourth loss this season in which it squandered a fourth-quarter lead.

The Falcons (4-10) are assured of their most losses since a 6-10 finish in 2014. The record is woeful, but with better finishes the storyline could be much different.

If not for a few mind-numbing plays, including a botched onside kick against Dallas and Todd Gurley's unintentional touchdown against Detroit, the Falcons might be much closer to respectability.

The Falcons also delivered mixed signals in consecutive 7-9 finishes the past two seasons. Each year they finished strong, including last season when they won their last four games to save coach Dan Quinn's job. It was only a temporary reprieve. Quinn and general manager Thomas Dimitroff were fired following five consecutive losses to open this season.

Atlanta's next coach and general manager will have to decide if it is time for a total rebuild. The perplexing Falcons offered strong arguments on both sides of that debate in the loss to Tampa Bay.

Matt Ryan enjoyed a bounce-back game despite running the offense without wide receiver Julio Jones, who missed his fifth game of 2020 with a hamstring injury.

Ryan completed 34 of 49 passes for 356 yards and three touchdowns. Even though his production declined following his last scoring pass, a 7-yarder to tight end Hayden Hurst midway through the third quarter, it was an important recovery game for Ryan. One week ago, Ryan threw a season-high three interceptions in a 20-17 loss at the Los Angeles Chargers.

With Isaiah Oliver on the sideline due to cramping and Blidi Wreh-Wilson unable to play because of an illness, the secondary's lack of depth was exposed. A botched defensive call highlighted the problem.

Tyler Hall, an undrafted rookie, was left in man coverage against Antonio Brown in the fourth quarter. Tom Brady pounced on the mismatch by finding Brown for a 46-yard scoring pass that gave the Bucs the lead.

Falcons interim coach Raheem Morris said “a bad signal and a bad communication” left Hall "in a bad matchup. ... That’s on us.”

Calvin Ridley continues to prove Jones is not Atlanta's only elite receiver. Ridley caught 10 passes for 163 yards with a touchdown, including eight receptions for first downs. He was targeted 14 times by Ryan.

Morris said Monday that Ito Smith has replaced Gurley as Atlanta's lead back. With Gurley losing 1 yard on his only carry, the offense lacked balance. Atlanta ran for only 37 yards on 13 carries, including 24 yards by Smith. The Falcons' only run longer than 7 yards was a 16-yard gain by Ryan.

“We’d obviously prefer to be much more balanced and that wears on the defense when you are, and we weren’t,” Ryan said. “We have to look at the film and figure out how we can be better in that department.”

After missing two games with a groin injury, left guard James Carpenter aggravated the injury and left the game.

11 — Ryan set a career high by completing passes to 11 receivers. Nine Atlanta players had at least two catches. Ryan has passed for more than 4,000 yards in 10 consecutive seasons.

The Falcons finish the season with two tough road games, including Sunday's visit to Kansas City to face the defending Super Bowl champion Chiefs. They close with a rematch at Tampa Bay.