Pickett making steady if not flashy progress for Steelers 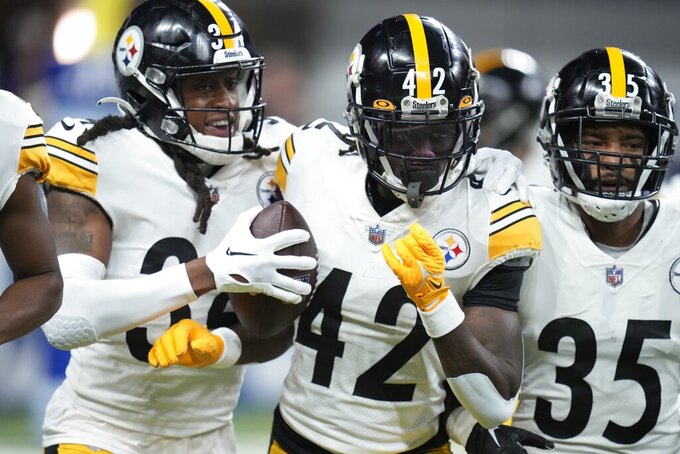 Pittsburgh Steelers cornerback James Pierre (42) celebrates an interception during the first half of an NFL football game against the Indianapolis Colts, Monday, Nov. 28, 2022, in Indianapolis. (AP Photo/Michael Conroy)

PITTSBURGH (AP) — Kenny Pickett is not going to blow opponents away with arm strength.

Or speed. Or stature. Or flawless decision-making. Or a quick release.

The Pittsburgh Steelers rookie quarterback's greatest strength may be his ability to be greater than the sum of his parts, a trait that was on full display during Monday night's 24-17 victory over Indianapolis.

Pickett is at the point in his nascent career where he doesn't have to be strong for the Steelers (4-7) to succeed, just strong enough. He doesn't need to be fast, just fast enough. Not quick, just quick enough.

Coach Mike Tomlin does not expect Pickett to morph into the “Kenny Perfect” persona he cultivated during his college days on the other side of the building the Steelers share with the University of Pittsburgh.

All Tomlin wants out of Pickett in 2022 is progress.

Pickett provided it in a sturdy if not spectacular performance while orchestrating his first NFL fourth-quarter comeback.

Sure, Pittsburgh only trailed by a point when the offense took over 16 seconds into the final frame.

Yet in a season in which the Steelers have had a volatile relationship with success, what happened over the next 11 plays offered a glimpse of the Pickett the Steelers hope he can become on a regular basis.

There were no big plays, just a series of little ones, namely a third-down laser to George Pickens on a crossing route, a pass Pickett made despite getting hit high by Colts linebacker E.J. Speed. Pickett also convinced offensive coordinator Matt Canada to call the running play that Benny Snell converted into a 2-yard touchdown and he bought enough time with his legs on the 2-point conversion to find Pickens in the back corner of the end zone to push Pittsburgh's advantage to seven.

It was enough to breathe some much-needed life into a season that threatened to spin out of control, at least for now.

“Right now we’re a four-win team right now,” said Pickett, who completed 20 of 28 for 174 yards. “We have to own that and chip away and get back to winning, and this definitely was a start.”

One Pittsburgh hopes it can build on down the stretch. The playoffs are a long shot at best for a team that hasn’t won consecutive games all season.

While the Steelers are attempting to still focus on the present, the reality is 2023 and beyond began the moment Tomlin handed Pickett the keys at halftime of what became a Week 4 loss to the New York Jets.

Pickett knew it was going to be a roller coaster. Yet there are signs things are starting to smooth out. He hasn't thrown an interception in three straight starts after tossing eight across in his first five appearances.

He got wide receiver Diontae Johnson involved more than he had in recent weeks and he displayed the kind of tenacity that is hard to measure, but readily apparent every time the ball is in his hands.

For now, it's enough.

“We’re all believing in what we’re doing and showing up every day to work, and every guy in that locker room wants to win, and we’re doing everything it takes to go out there and win and leaving it all out there,” Pickett said. “I think if you have that, you got a shot.”

The offensive line continues to show an uptick in the run game. The Steelers have gone over 100 yards rushing six times in 12 games, including four straight. That kind of balance is taking some of the pressure off Pickett to try and do everything. It also chews up the clock and keeps the defense off the field.

The halftime ritual. For a second straight week, the Steelers took the lead into the break only to come out flat to start the third quarter. It cost them dearly in a loss to Cincinnati on Nov. 20 and nearly came back to bite them again on Monday night when the Colts — who were thoroughly outclassed in the first half — came alive and seized the momentum while briefly erasing a 13-point deficit.

Snell and Anthony McFarland saw their places on the depth chart behind starter Najee Harris usurped by undrafted rookie free agent Jaylen Warren during training camp. With Warren sitting out because of an injury and with Harris unavailable in the second half, the duo did an excellent job keeping the chains moving, combining for 92 yards on 18 carries, with Snell scoring his first touchdown since Dec. 21, 2021.

Special teams coach Danny Smith might want to blow up the kickoff coverage unit and start over after Indianapolis nearly flipped the game after the Colts averaged a staggering 45 yards per return. Poor lane discipline and even worse tackling are to blame, particularly on the 89-yard sprint by Dallis Flowers to start the second half that snapped the Colts out of a first-half malaise. While they were missing injured special teams aces Rob Spillane and Miles Boykin, the drop-off shouldn't have been so dramatic.

Harris injured his abdomen late in the first half and his status for this week is uncertain.

Try to string back-to-back wins together for the first time since January when they visit Atlanta next Sunday. The Steelers have dominated the series through the years and are 14-2-1 all time against the Falcons.