Plenty of studs, paucity of duds at NFL scouting combine 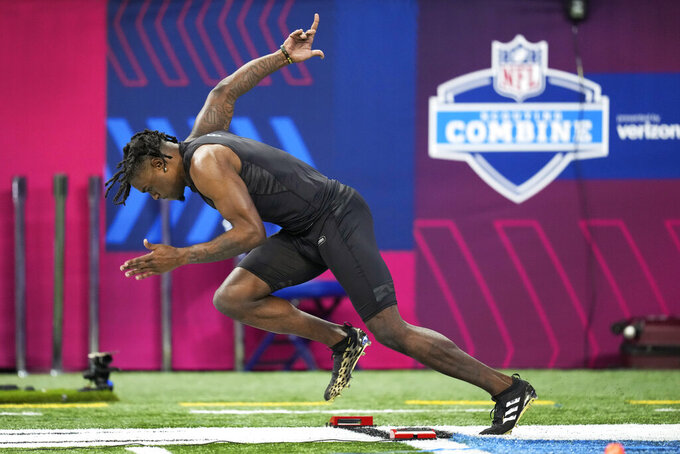 INDIANAPOLIS (AP) — If this was a farewell to Indianapolis, the return to an in-person NFL scouting combine after a year's hiatus was a successful sendoff complete with blazing 40-yard dashes, jaw-dropping athleticism and touching off-the-field moments.

Or maybe it was a more of a strong closing argument why the ever-more-popular gathering of NFL teams and their future stars should stay put rather than relocate to the glitz of Dallas or Los Angeles in 2023 and 2024.

The event held in Indy since its inception in the 1980s has morphed into a prime-time football fix for fans ahead of free agency and the draft. And while there were the usual disappointments from prospects who either didn't participate in the drills — or wish they hadn't — the studs far outweighed the duds.

Here's a look at some of the more memorable performances at Lucas Oil Stadium:

Dozens of players proved Bill Polian right in his longtime contention that the turf where Edgerrin James blazed his Hall of Fame career should never be considered a slow track.

Former Baylor cornerback Kalon Barnes ' 4.23 clocking in the 40-yard dash was just one-hundredth of a second off wide receiver John Ross's record 4.22 in 2017.

Texas-San Antonio cornerback Tariq Woolen came in a 4.26 and his run was equally impressive given that he measured in at a massive 6-foot-4 1/8 and 205 pounds, making him one of the biggest cornerbacks ever, much less one who clocked the fourth-fastest time in the event's history.

Woolen and Barnes' blazing times on Sunday capped a blistering week in which eight receivers were timed in 4.4 seconds or less and a dozen O-linemen ran the 40 in 5 seconds or less.

One of the most impressive of the 324 prospects was Georgia defensive lineman Jordan Davis, who ran the 40-yard dash in 4.78 seconds Saturday night, which was astonishing for a man weighing 341 pounds. He also had a standing broad jump of 10 feet, 3 inches.

Malik Willis was the darling of the combine, turning heads with his impressive showing both on and off the field. He showed off an exceptionally strong arm on deep throws and a video posted by Twitter user Ryan Lacey surfaced showing the former Liberty QB giving some of gear from his swag bag to a homeless woman outside the Indianapolis Convention Center.

After he wowed observers with his workout, Willis explained on the NFL Network broadcast, “I walked past her on the way to the Nike suite and I chopped it up with them and I walked out with a suitcase and whatnot. And I felt bad because I saw her son. It was a pregnant lady and she was homeless. And I was just like, ‘Shoot, I don’t have no money, but I can give you a couple of shirts.’”

Willis didn’t know anybody was watching his spontaneous act of kindness.

Neither did Brown University QB EJ Perry, who was videotaped picking up trash on the sideline after the QBs' workout.

Former University of Cincinnati defensive back Ahmad “Sauce” Gardner displayed excellent skills on the field and at the podium. He showed off the bling (diamond encrusted “SAUCE” neckless and a grill that reflected all the colors of the rainbow) in Indy but also displayed a soft-spoken humility.

Told it was almost like there was an Ahmad and a Sauce, he said, “Most definitely. When I’m in my little calm mood, I would say that’s me being Ahmad. When (I’m not) I’m Sauce. I got to know when to switch on and when to switch off."

And which one were reporters talking to?

“ A little bit of both, " said Gardner, who didn't allow a touchdown in more than 1,000 coverage snaps in college.

Unlike last year when they only sure thing was Trevor Lawrence going No. 1 to Jacksonville, there's a lot of uncertainty about this year's draft — and not just at quarterback. The Jaguars again own the top pick and the big debate is whether they'll take N.C. State left tackle Ickey Ekwonu, Michigan edge rusher Aidan Hutchinson, Oregon linebacker Kayvon Thibodeaux or Alabama left tackle Evan Neal at No. 1.

If it's Neal, he'll become the Crimson Tide's first No. 1 overall draft pick since Joe Namath in 1965 by the Jets in the AFL draft, and the first in the NFL draft since Washington selected quarterback/halfback Harry Gilmer way back in 1948.

“It would mean everything,” Neal said. “There are a whole lot of Alabama players who were worthy of being drafted in that spot. For it to be me would be really special. Make the whole state of Alabama proud, the university for sure.”

San Diego State punter/kicker Matt Ariaza showed everyone why he's known as the “Punt God.” He punted the ball from his 20-yard line to the 2 and clocked a 4.72-second 40-yard dash, plenty fast for a fake. Araiza is considered a Day 2 pick with a decent chance of becoming just the third punter drafted in the second round, joining Rohn Stark (1982, Ravens) and Todd Sauerbrun (1995, Bears).

The Ray Guy Award winner led the NCAA with a 51.2-yard punting average last year, made all 45 of his extra points and converted 18 of 28 field goal attempts.

Scouts were disappointed that LSU star cornerback Derek Stingley Jr. didn't do any of the drills in Indy. But he revealed it was a Lisfranc injury he suffered in September that ended his junior season. Stingley said he had surgery on his left foot Sept. 29. He said he’s close to fully recovered and expects to be a full participant in LSU’s pro day April 6.

Stingley is projected as a top 10 draft pick despite his injury and a nondescript COVID-19-shortened season in 2020. Stingley burst onto the scene with six interceptions as a freshman in 2019.

Player agents only won a partial victory when the NFL scouting combine capitulated and eased up its COVID-19 mitigation measures, including a “bubble,” amid threats of a boycott of the on-field workouts. The combine, however, stuck to its truncated schedule in which prospects were required to do their bench press and their on-field workouts on the same day instead of a day apart.

Most players refused. One by one, they stepped up to a microphone near the stage erected inside the Indianapolis Convention Center and told assembled coaches, scouts and fans in the stands that they were going to do the bench press at their pro day instead.