Protecting Wentz is becoming a major problem for Commanders 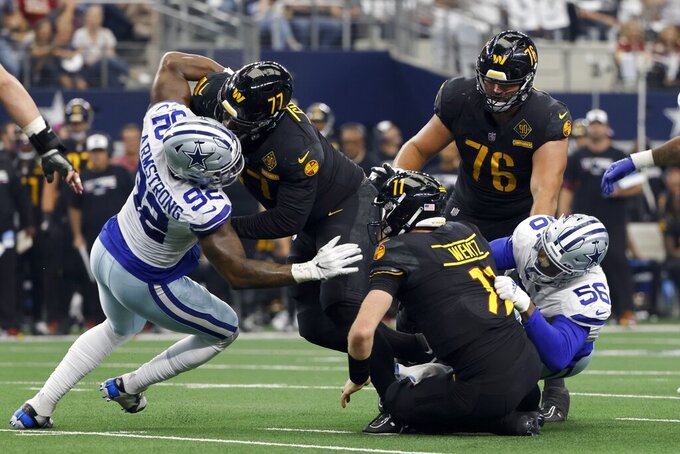 Ron Rivera is quick to point out Carson Wentz led the NFL in passing earlier this season when Washington’s starting quarterback had a clean pocket to throw from.

Wentz has not had that luxury much, and that’s directly related to the Commanders losing three in a row to fall to 1-3. He has been sacked a league-high 17 times, and the offensive line not being able to protect Wentz or give him time to throw is the biggest of the team’s problems.

According to NextGen Stats, Wentz’s time to throw has decreased each start from 3.14 seconds against Jacksonville to 2.92 against Detroit, 2.6 against Philadelphia and 2.58 against Dallas. In the aftermath of a 25-10 loss to the Cowboys, Rivera cited injuries along the line and a lack of run-pass balance as reasons for the struggles.

“As soon as we got into the situation where you are going to have to throw the ball, (Cowboys pass rushers) could pin their ears back and pull a little bit more pressure,” Rivera said Monday. “We can’t put ourselves in a hole, getting into those second-and-longs, third-and-longs because it plays into what their strength is.”

With pass protection looking like a major weakness, there has already been one personnel change with Saahdiq Charles replacing veteran Trai Turner at right guard. Rivera said Turner, who made the Pro Bowl five times while playing for him with Carolina, was banged up and that Charles would start Sunday against Tennessee.

Developing the running game has been a challenge, and Rivera chalked part of that up to a revolving door at center. Starter Chase Roullier landed on injured reserve, replacement Wes Schweitzer was concussed, and after Nick Martin started against the Cowboys, Tyler Larsen — fresh off the physically unable to perform list — could be the fourth player at the position in five games.

Getting rookie running back Brian Robinson Jr. in for his pro debut could be a nice boost, whenever he’s ready to return after being shot in an attempted robbery Aug. 28. But there’s still the matter of Wentz holding onto the ball too long, a known issue in recent years that has hurt Washington.

“When you do see him go through his progressions, you see almost to the point where by the time he gets to that second or third, he’s under duress,” Rivera said. “And a lot of times you’d love to be able to say, ‘Hey, if you haven’t thrown it by your first one, you get to your second one, you’ve got to be ready to deliver it.’ I think that’s something he’ll learn and get comfortable with over time, and hopefully it’s a short period of time.”

Not much. The Commanders have punted more than any other team in the league, but at least Tress Way has been able to average almost 49 yards an attempt to flip the field.

A little bit of everything, and that’s not just on offense. Washington’s defense continues to allow big plays, which is a problem with Derrick Henry and the Titans coming to town.

Defensive tackle Jonathan Allen had eight tackles, including four for loss, and a sack against Dallas. He and fellow Alabama product Daron Payne continue to be the lone bright spots on a rough unit.

Cornerback William Jackson got burned on a 30-yard touchdown pass from Cooper Rush to CeeDee Lamb on Sunday. One of the team’s highest-paid players, Jackson has struggled since signing a $40.5 million, three-year contract before last season.

Robinson could play as soon as Sunday, but Rivera expects rookie receiver Jahan Dotson to miss a game or two with a hamstring injury. Pass rusher Chase Young remains out while recovering from surgery to repair a torn ACL.

Minus-6 — Washington’s turnover differential. It’s also the only team in the league to have more giveaways than takeaways in every game this season.

Find a way to start fast. The Titans are the first NFL team in more than a decade to score a touchdown on their opening drive in each of the first four games of a season.