With punch of the ball vs. Pats, Zimmer entered Bills lore 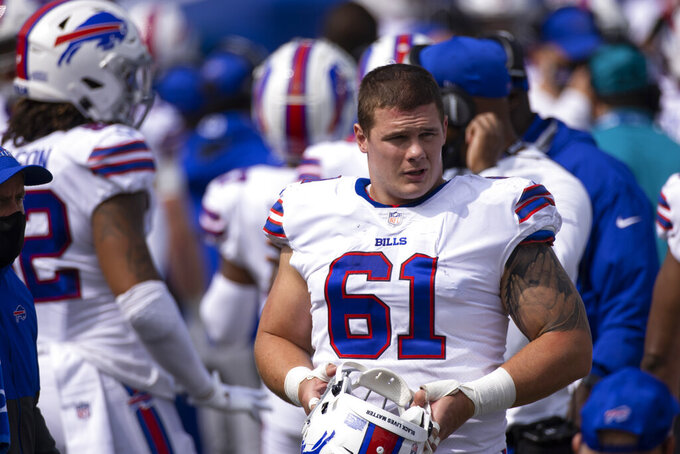 Buffalo Bills defensive tackle Justin Zimmer (61) walks on the sideline during an NFL football game against the New York Jets, Sunday, Sept. 13, 2020, in Orchard Park, N.Y. Justin Zimmer had more appearances on the NFL transactions list than tackles -- 27-15 -- since 2016, when the undersized defensive lineman first broke into the NFL as an undrafted free agent with the Buffalo Bills. None of that mattered on Sunday, Nov. 1, 2020, when Zimmer, in his second stint with Buffalo will be remembered for forcing the decisive fumble to secure a 24-21 win over the Bills AFC arch-nemesis New England Patriots. (AP Photo/Brett Carlsen, Fikle)

ORCHARD PARK, N.Y. (AP) — With more NFL transactions than tackles to his name over five nomadic years, defensive lineman Justin Zimmer arrived in Buffalo for a second stint with the Bills in mid-August doubting his chances.

It’s not often an unproven journeyman signed so late in the offseason gets a real opportunity to make an NFL roster. Worse yet, Zimmer acknowledged not being accustomed with the attacking style of play the Bills demand from their tackles, which became evident during his first few practices.

“Yeah, I’d be lying if I said after like the first week or so that I thought I would be here at this point in time,” he said Wednesday.

Zimmer, who played in Buffalo’s season opener before spending the next month on the practice squad, has spent the past three weeks on the active roster. During that time, he made an indelible entry into franchise lore.

With one decisive punch of the ball to force Cam Newton’s fumble at Buffalo’s 13 with 31 seconds left and clinch a 24-21 win over New England on Sunday, Zimmer became one of the few Bills in 20 years to play a decisive role in beating their AFC East nemesis.

The victory was Buffalo's sixth in 41 meetings with New England since 2000, and the first at home since 2011.

The win also opened the discussion of a changing of the guard taking place, for one year at least, in a division the Patriots have owned by winning 17 AFC East titles since 2001, including the past 11.

“Honestly, I don’t know what to feel right now," Zimmer said after the game. "It’ll probably take me 24 hours just to realize kind of everything that happened.”

Zimmer acted instinctively upon seeing the Patriots' linemen shift to their left. He ran down the line and then cut upfield to get ahead of the crowd of blockers. Newton cut back toward the middle and Zimmer dived and punched the ball loose, with safety Dean Marlowe recovering the fumble.

Zimmer was still struggling to put it into perspective days later.

“It’ll probably be the biggest play of my career,” he said, before correcting himself. “I hope I’ll make a bigger play, but it’s hard to beat that play.”

His cautious approach stems from years of not knowing what comes next. Zimmer has bounced around the continent since completing his college career at Division II Ferris State in 2015.

After being cut by the Bills and then spending a stint on the New Orleans Saints' practice squad in 2016, Zimmer had run out of options before signing with the Canadian Football League's Montreal Alouettes in 2017.

It wasn’t until the following year when he made his NFL debut, playing one game for Atlanta. Then he landed in Cleveland, where he played two games for the Browns in 2019.

Zimmer has been credited with 16 tackles in seven career games, and his bio on ProFootballReference.com lists 27 transactions.

“Probably. That wouldn’t surprise me,” Zimmer said of how many times he’s been cut, signed and re-signed.

“There's been times where I thought I've been done. It's hard to tell, because you never know who wants to give you another chance,” Zimmer said, crediting his wife and family for providing support. “You just have to have confidence.”

Coach Sean McDermott commended Zimmer for not giving up on his dream, calling it a lesson his own children can apply to their lives.

“To see a young man like Justin Zimmer go through what he’s gone through and then to persevere and make a play like that, that’s a great life experience we can all learn and be encouraged by,” McDermott said.

In Buffalo, Zimmer has been dubbed “The Quiet Assassin” because his reserved personality doesn’t reflect the relentless pursuit he shows on the field. He was initially credited with forcing Chiefs running back Clyde Edwards-Helaire to fumble in the fourth quarter of a 26-17 loss two weeks ago, but the call was overturned following a video review.

“You’ve got a guy who doesn’t say too much, but every time he comes out to practice he works hard,” linebacker Tremaine Edmunds said. “I wasn’t too surprised with the play that he made, because I see it in practice.”

Zimmer acknowledged having always been somewhat of an introvert. He’s also guarding against becoming overconfident because of one play and the attention it generated.

“I’m not even close to comfortable with my position yet. Every week, you’re still getting evaluated. If you start playing poorly, they’re going to move on from you as quick as they brought you up," Zimmer said, speaking from hard-earned experience.

NOTES: C Mitch Morse (did not practice) and S Micah Hyde (limited practice) remain in the NFL's concussion protocol. ... WR John Brown missed practice to rest a knee injury that's forced him to miss two of the past four games. ... CB Josh Norman, who has missed two games with a hamstring injury, did not practice.