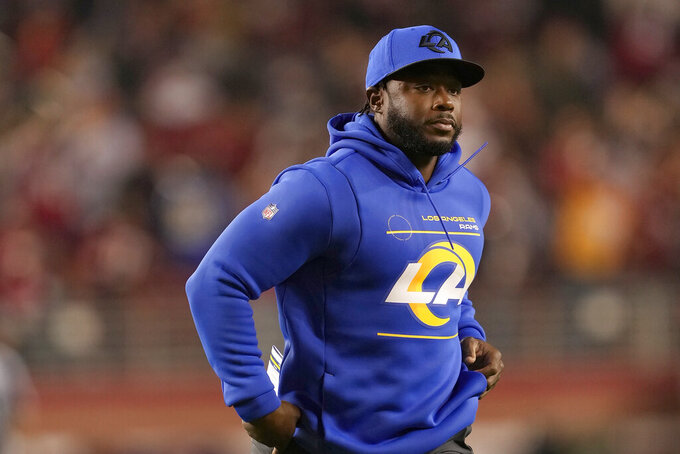 FILE - Los Angeles Rams running backs coach Thomas Brown is shown during an NFL football game against the San Francisco 49ers in Santa Clara, Calif., Monday, Nov. 15, 2021. Brown was a five-star running back destined for the University of Georgia back then in the early 2000s, his mind focused on the Bulldogs and the NFL. He hadn't even imagined trading in his cleats for a whistle — “I was adamant about not being a coach,” he says with a grin.(AP Photo/Tony Avelar, File)

THOUSAND OAKS, Calif. (AP) — Thomas Brown learned most of what he needed to know about how football coaches get hired and promoted two decades ago in the cafeteria of Tucker High School in suburban Atlanta.

“I had a pretty diverse high school, pretty mixed,” the Los Angeles Rams running backs coach said. “I had a lot of friends on the football team who had different backgrounds. But in the cafeteria, we all sat with who made us feel the most comfortable. That's just the way it is.”

Brown was a five-star running back destined for the University of Georgia back then in the early 2000s, his mind focused on the Bulldogs and the NFL. He hadn't even imagined trading in his cleats for a whistle — “I was adamant about not being a coach,” he says with a grin.

And he never would have imagined his future career would get a major boost from Sean McVay, who was then a dual-threat quarterback at a rival high school about nine miles away.

To break up the cafeteria-seating mentality that has held back Black coaches for decades, Brown believes up-and-coming football minds need more than talent and leadership. They must find decision makers willing to challenge the status quo by giving chances to previously underheard voices — and McVay, Brown’s former high school football opponent, has been exactly that.

“A lot of times in the hiring process, it boils down to people who do not want to go outside their comfort zone,” Brown said. “It’s challenging to explore a different culture, to take a different approach to it. I understand it, and that’s what we all have to fight against.”

When McVay decided two years ago to shake up his traditional methods of hiring assistants on a Rams staff previously packed with veteran coaches and McVay's former colleagues, the two biggest beneficiaries of his willingness to think outside the box were Brandon Staley and Brown.

Staley was a longtime collegiate assistant with only three years of NFL experience, but a wealth of good ideas about defenses. Brown had a decade of experience as a respected running backs coach at six universities, and was eager for a chance to grow.

Less than two years after McVay chose them, Staley has already parlayed one dominant season as a defensive coordinator to a head coaching job with the Chargers. The 35-year-old Brown — four months younger than McVay — also has been an immediate hit with the Rams, and he added the title of assistant head coach this season to a career on an exciting new trajectory.

“I lean on him in a lot of ways,” McVay said. “He’s just got a great feel for people. He’s got a great pulse of the team, and he’s one of those guys that I can always trust is going to be able to give me valuable information. ... When you meet certain people, they’re refreshingly secure, just comfortable in their own skin. That’s exactly how he’s always been from the time that we’ve been working together.”

Brown gets rave reviews from McVay and players alike for his leadership, tactical smarts and motivational fire. His passion didn't even wane when he tore his Achilles tendon at practice with the Rams in October 2020. Instead, he walked it off, had surgery and kept coaching with a protective boot and a scooter.

The star Georgia running back probably would barely recognize this current version of Brown, who became a sixth-round draft pick before injuries ruined his promising pro career before he got to take an NFL snap.

That's when Mark Richt, his college coach, became the other major backer of Brown's coaching career: Brown initially wanted to be a post-football career counselor for players, but ended up working as a Georgia strength coach for a year. His coaching fire kindled, he went to three schools in three years as a running backs coach before returning to Athens in 2015.

When Richt moved from Georgia to Miami, Brown went with him and added the responsibilities of offensive coordinator. For three seasons, he worked alongside Richt creating game plans and learning larger coaching responsibilities.

When Richt retired, Brown spent one year at South Carolina, but he was ready when a new opportunity arose.

McVay and Brown knew of each other from high school, but they didn’t become friendly until 2015, when McVay, then Washington's offensive coordinator, asked Brown for advice about some Georgia players.

In early 2020, Rams scout Michael Pierce asked Brown if he would be interested in interviewing for a job with McVay. Brown flew to the West Coast and quickly dazzled McVay, whose intellectual curiosity was stoked by a fresh mind.

“One thing I love the most about Sean is he doesn’t really care what other people think from a trend standpoint,” Brown said. “He trusts his gut. For me and Brandon to get an opportunity, for him to go outside the box and interview me, a college guy, when he could have picked from any number of different NFL guys who would have gladly come to LA, was a huge step for him and for me. That’s something I’ll take with me in the future, to be always open-minded.”

With three former Rams assistants already serving as head coaches, McVay's imprimatur is among the most valuable quantities in coaching, and Brown has it. He also loves coaching in the NFL, where he has the time to be a husband and a father of three boys whose family loves living in Southern California.

Still early in his second decade in coaching, Brown is grateful for his ability to sit at increasingly bigger tables in the coaching cafeteria. As he moves up, he plans to help others behind him who have the talent, but lack the opportunity.

And wherever the job takes him, Brown will thank McVay and Richt by becoming something more than the product of his relationships.

“I think too often, many guys in the coaching profession try to emulate the guy they learned the most from,” Brown said. “To me, that’s the difference between learning from guys and being yourself. I’ve learned from a lot of people, but I’m going to be myself until the day I die.”