Ravens playing their best, soaring toward No. 1 seed in AFC 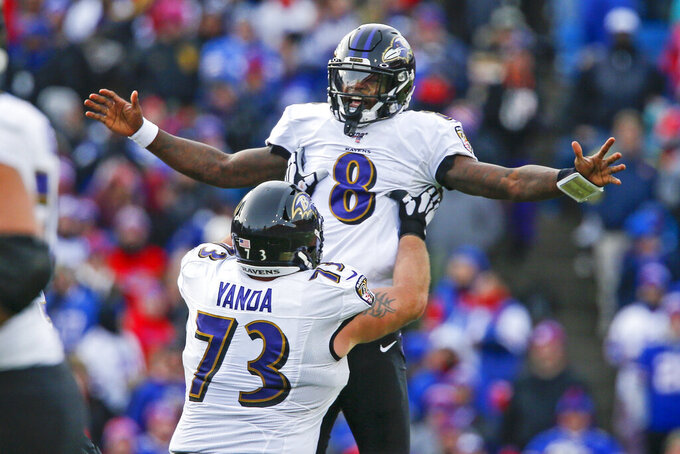 BALTIMORE (AP) — Seven-time Pro Bowl guard Marshal Yanda owns a Super Bowl ring and has played on several excellent teams with the Baltimore Ravens, including seven that won at least 10 games and three that reached the AFC championship game.

In his estimation, the current edition of the Ravens top them all.

Unbeaten since September and having already clinched a second straight AFC North crown, Baltimore (12-2) has only one goal left on its regular-season checklist: top seed in the AFC playoffs.

“We've won 10 games in a row. We've never done that here," Yanda said Thursday night after the Ravens pummeled the New York Jets 42-21. “This is definitely the best team I've ever been on."

That assessment may ultimately change if the Ravens don't bring home another Super Bowl trophy. This is Baltimore's fourth AFC North title under coach John Harbaugh, who at this time isn't interested in stacking this team against the other three.

“Two of those teams won some playoff games. One of them won a Super Bowl," he said. "So, until we do that, we don’t compare.”

Fair enough, but at this point in the season there appears to be no better team than Baltimore, which owns the best record in the NFL and needs only one win in its final two games to sew up the No. 1 seed in the AFC for the first time.

The Ravens have defeated several of the better teams in the league — including New England, San Francisco and Houston at home and Seattle, Buffalo and the Los Angeles Rams on the road.

All of this with a 22-year-old, second-year quarterback. On a night when Lamar Jackson set the NFL single-season record for yards rushing by a quarterback, he torched the Jets with five touchdown passes to raise his league-leading total to 33.

“He’s changing the games for us," Yanda said. “It starts with the quarterback playing well."

Mere minutes after the Ravens clinched the division crown and extended their winning streak, they started looking forward to a bit of rest and a Dec. 22 game at Cleveland.

“To be able to stack this number of wins is remarkable," Harbaugh said. “And yet, you get to this point, and the next one becomes the most important one."

The Ravens' top-ranked run game ripped through the second-ranked defense against the rush. Jackson amassed 86 yards rushing on only eight carries and Baltimore averaged 6.4 yards per attempt against a New York defense that was yielding only three yards per rush.

Then again, there's something to be said for a passing game that that totaled 212 yards and five scores through the air.

Baltimore's special teams took the night off. Not only did the Jets total 179 yards on seven kickoff returns and score on a blocked punt, but Ravens kicker Justin Tucker missed an extra point.

“We played really well on special teams (in Buffalo) last week," Harbaugh said. “We played not well at all this week. So that’s an area of concern right now. “

With the game in hand, Harbaugh turned to backup quarterback Robert Griffin III with 7:35 left.

“It was not an easy decision right there," Harbaugh said. “'Probably, the biggest thing is we have so much confidence in Robert. It makes you feel really good about doing it.”

Given how often Jackson runs the ball, it's imperative to limit the hits he takes and a luxury to have a veteran such as Griffin at No. 2 on the depth chart.

De'Anthony Thomas hasn't been particularly special as a kick returner since being signed Nov. 6. Against the Jets, he had one punt return for eight yards and went five yards with a kickoff.

The Ravens absorbed no significant injuries but played without left tackle Ronnie Stanley and special teams ace Chris Board, both inactive with concussions.

The extra rest should help those two and everyone on the team who is aching.

1,103 — The new number to beat for yards rushing by a quarterback in a single season after Jackson eclipsed the previous record held by Michael Vick.

Cleveland was the last team to beat Baltimore. The Browns scored 30 points after halftime in a 40-25 victory on Sept. 29.