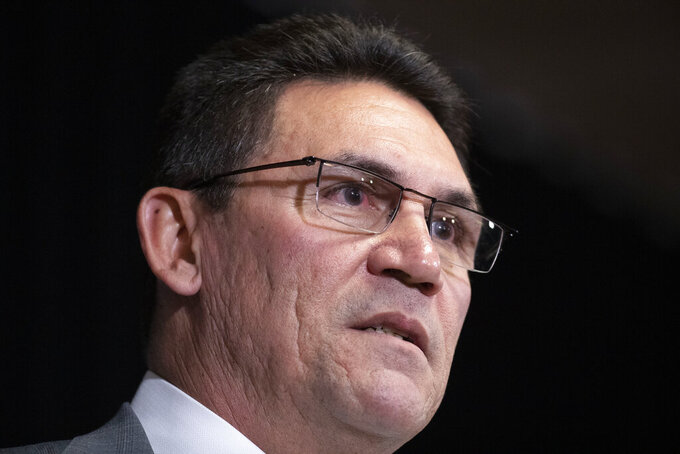 Rogers fills a key role in the front office vacated by the departure of senior vice president of football operations Eric Schaffer. Rogers worked closely with new Redskins coach Ron Rivera during Rivera's nine seasons in Carolina while serving as the team's executive director of player finance and football research.

“Rob was a tremendous resource for me over the past nine seasons, and I’m excited for him to be an integral part of building something special here with the Redskins," Rivera said.

Rogers fills a void left by Schaffer's somewhat surprising exit. Schaffer was widely considered a strong candidate for a bigger role after the firing of president Bruce Allen but now will be looking for a new NFL job after 17 seasons with Washington.

Schaffer in a statement thanked owner Dan Snyder for bringing him to the NFL and said he's looking forward to the next chapter.

The next chapter with the Redskins is a coach-centered approach to decisions led by Rivera, whom Snyder zeroed in on as his top candidate and hired soon after a 3-13 season was over. Rivera has already made significant changes.

Upon taking the job, Rivera hired former Raiders and Jaguars coach Jack Del Rio as defensive coordinator and on Wednesday hired Scott Turner as offensive coordinator. The son of former Redskins coach Norv Turner worked as quarterbacks coach under Rivera with the Panthers.

Moving on from offensive coordinator Kevin O'Connell to Scott Turner means quarterback Dwayne Haskins will have to learn his second system in as many professional seasons. Haskins and others supported O'Connell staying, but most assistants were replaced, with the exception of special teams coordinator Nate Kaczor.

“We all came to an agreement on the vision that we have for the franchise going forward,” Williams said. “I am looking forward to this new opportunity to work with Malcolm, and I have always respected his work during my time with the franchise. We both look forward to working with and supporting Coach Rivera in making sure that our players are prepared for life on and off the field.”

Alex Santos remains as director of pro personnel, and Kyle Smith — son of longtime NFL general manager A.J. Smith — stays on as director of college scouting and runs the draft.

The Redskins' building-wide shakeup has reverberated beyond the front office and coaching staff. After Snyder fired trainer Larry Hess, Rivera continued to put his Carolina stamp on the team by hiring Ryan Vermillion from the Panthers.

“For many years, I’ve seen firsthand the positive impact Ryan has on a team,” Rivera said of Vermillion, who was the Panthers' head trainer for 18 years. “His primary focus has always been the health of the players, and he is going to be a tremendous addition to the Redskins.”

The Redskins put 14 players on injured reserve this season who were on their Week 1 roster and led the league with 27 on IR in 2018.