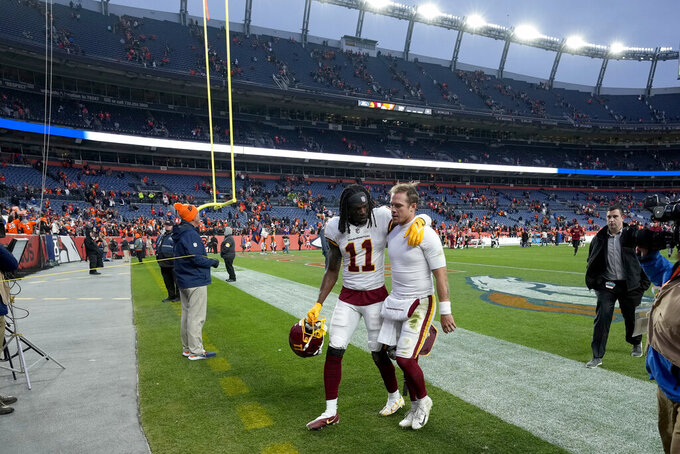 Heinicke threw two interceptions in a loss at the Denver Broncos that dropped Washington to 2-6. Rivera instead pointed to some of the progress Heinicke has made in recent weeks.

“I think that he’s being productive for the most part,” Rivera said. "The one area we’ve got to get better on, obviously, and it’s kind of stood out in the last few weeks is we’ve got to be better in red zone. We’ve got to come down and when we get chances to make plays down there, we’ve got to make those plays.”

Heinicke has completed 63.8% of his passes for 2,065 yards, 12 touchdowns and nine interceptions since taking over for injured starter Ryan Fitzpatrick midway through the season opener. Asked if he deserves the starting QB job, Heinicke said it was not his decision.

“It’s out of my hands,” Heinicke said after the 17-10 loss to Denver on Sunday. “The biggest thing I do is I go into that facility every single day and I give it my all and that’s all I can do. I control what I can control, and I feel like I’ve gotten better throughout the weeks and I feel like it’s just not been enough lately.”

Rivera did not have an update on Fitzpatrick other than to reiterate that the 38-year-old was set for an MRI on his injured right hip next week. Fitzpatrick is signed only for this season, and Washington's shift into evaluation mode for next season could play into what his status is down the stretch.

That also explains why Heinicke is getting every chance to show Rivera and offensive coordinator Scott Turner what he can do. The 28-year-old only has nine career NFL starts on his resume.

Tom Brady and the defending Super Bowl champion Buccaneers are up next Nov. 14. Heinicke earned his contract by playing well in a surprise start against Tampa Bay in the playoffs, and he'll now get a chance to show how much improvement he has made since.

The defense seems to be rounding into form after a rough start. Defensive linemen Jonathan Allen and Daron Payne and safety Landon Collins each sacked Broncos QB Teddy Bridgewater, and the unit allowed just 273 yards.

Red zone offense is one thing, but the entire offensive line is a mess because of injuries. Heinicke was sacked five times, including a 6-yard loss on the final drive of the game with the chance to tie the score. The bye week could not come at a better time for all involved.

With starting running back Antonio Gibson's workload dialed back while dealing with an injured shin, rookie Jaret Patterson got to start showing what he could do in Denver. Patterson ran 11 times for 46 yards and could be Washington's feature back later this season if the coaching and training staffs decide to shut down Gibson.

Kicker Chris Blewitt had two more field-goal attempts blocked to make it a total of three in two games since Washington signed him to replace veteran Dustin Hopkins. Asked if Blewitt was still the team's kicker, Rivera responded, “For now.”

“Kickers are hard to find,” Rivera said. “Consistent kickers are even harder to find. Guys that have had success in this league are on teams. There’s not a 90% guy out there right now that you could just pick up and he’s going to go out and do it.”

Hopkins made his only attempt for the Los Angeles Chargers on Sunday and is at 86.7% this season.

Starting center Chase Roullier could miss a significant amount of time after injuring his left leg at Denver. He was carted off with an air cast around his left ankle/lower leg.

1 — Punt in the past two games for Washington, despite scoring a total of 20 points.

Heal up during the bye, while Rivera figures out how to shift his focus into win-later mode. The only suspense left in the next few months is what Washington's new name will be.