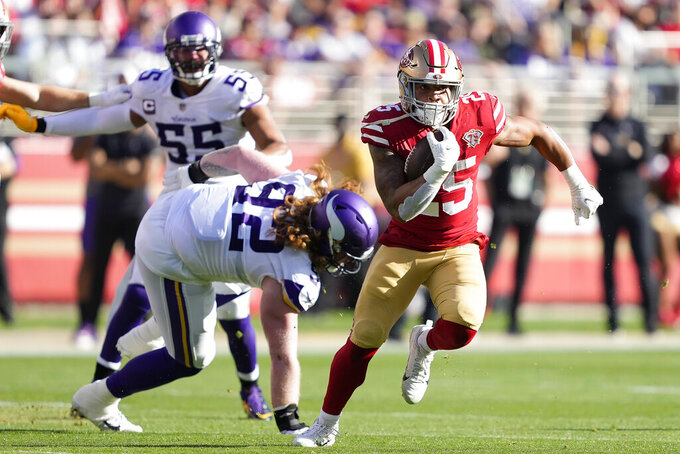 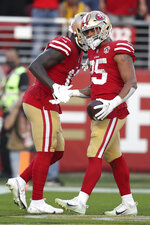 SANTA CLARA, Calif. (AP) — Elijah Mitchell has been one of the NFL's biggest surprises this season.

Whether it's going from overlooked sixth-round project out of Louisiana-Lafayette into one of the league's productive backs as a rookie, or his knack on nearly every run for the San Francisco 49ers to churn out a couple of extra yards, Mitchell exceeds expectations.

“He competes for every single yard,” coach Kyle Shanahan said. "One of the biggest things for me as a play-caller is when I see with my own eyes, that it’s going to be second-and-10 and I start to look down and think about what I’m calling next. Then people in the box tell me it’s second-and-6. I don’t totally believe him because I saw that he was going down and I don’t realize that he fell forward and got 4 yards. When it’s like that, which he does all the time now, you keep going, it helps you keep doing it.”

Mitchell has been consistently doing that all season as he is fourth in the NFL with 86.6 yards rushing per game and second among all backs with 3.84 yards per carry after contact, according to Pro Football Focus.

Mitchell has helped spark a running game that has led the Niners (6-5) to get back into playoff position in the NFC as San Francisco has overcome the loss of starter Raheem Mostert in the season opener by finding a back who may not be quite as fast, but makes up for it with his power.

“Elijah hits the holes downhill, like Raheem does. He’s not going to run 23 mph, but that 5 yards in between where he gets the ball through the line of scrimmage, he’s just so explosive and so fast,” tight end George Kittle said. “I think guys think, ‘I’m going to get him with an arm tackle because he’s not the biggest back in the world.’ But he just runs through arm tackles.”

Mitchell has surprised even his own teammates with his power at 5-foot-10, 200 pounds. Back in Week 8, Mitchell ran into the back of his left tackle Trent Williams, who said that he probably hadn't been hit that hard by his own running back since blocking for Adrian Peterson back in college at Oklahoma.

“I was like, ‘Damn, that’s what they feel when they’ve got to tackle him?’" Williams said. "I can tell why he breaks so many tackles.”

Mitchell was a bit of an afterthought when he was drafted in the sixth round after San Francisco had already traded up to take Trey Sermon in the third round to join a group that also included Mostert, Jeff Wilson Jr., Wayne Gallman and JaMycal Hasty.

But the Niners quickly realized in training camp that they might have found a gem in Mitchell and he has proven them right.

“There’s some stuff to his game that the more he plays, the more you realize that he’s a special young player and there’s a reason why he’s having productivity,” offensive coordinator Mike McDaniel said. "You’d have no way of knowing. Even grainy Louisiana-Lafayette tape wouldn’t tell you that.”

Mitchell is just the latest unheralded back to have success in the Shanahan system with Bobby Turner as running backs coach.

That dates back to when Kyle's father, Mike, and Turner were together in Denver, and backs like Terrell Davis, Olandis Gary and Mike Anderson had success after being drafted in the later rounds.

Mitchell is looking to be the fifth rookie taken in round four or later in the draft to average at least 85 yards rushing per game since 1975 and all but one — Jordan Howard in 2016 — played for a Shanahan and Turner. Gary, Anderson and Alfred Morris are the others.

Mitchell credits Turner for instilling the toughness in him that allowed him to handle the ball 32 times last week despite a broken finger.

“Really it just starts in the room," Mitchell said. "That’s just something that our position coach Bobby T expresses a lot, keep driving and protecting the ball. So it just starts with the mindset and we always talk about that.”