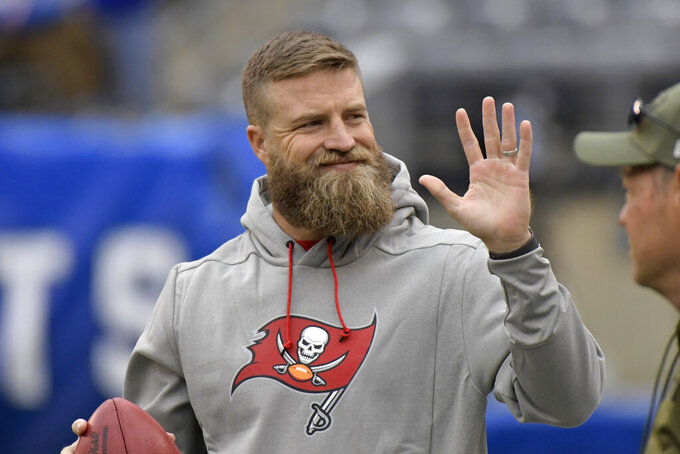 FILE - Tampa Bay Buccaneers quarterback Ryan Fitzpatrick waves to fans before an NFL football game against the New York Giants, Sunday, Nov. 18, 2018, in East Rutherford, N.J. Quarterback Ryan Fitzpatrick confirmed to The Associated Press on Friday, June 3, 2022, that he informed former teammates of his intention to retire a day earlier. Former Bills running back Fred Jackson first announced the news of Fitzpatrick’s retirement on his Twitter account by posting an image and message from his former Buffalo teammate. (AP Photo/Bill Kostroun, File)

Amazon Prime Video announced Tuesday that Fitzpatrick, the recently retired journeyman quarterback nicknamed “FitzMagic,” is joining the streaming service as an analyst for its first season as the exclusive home of “Thursday Night Football.”

Fitzpatrick will be part of Amazon's pregame, halftime and postgame coverage.

Although the 39-year-old started for a record nine teams over his 17-year career, only one of this year's Thursday night matchups features two of his former teams: the Cincinnati Bengals hosting the Miami Dolphins on Sept. 29.

“One of the great characters in the league, Ryan has been a fan favorite and a beloved teammate everywhere he’s gone over the last 17 seasons,” Jared Stacy, Prime Video's director of global live sports production, said in a statement. “We’re thrilled to now have him on our team and know our viewers will love seeing his sense of humor and intelligence on display every week.”