Saints defense optimistic it can hold up without Rankins 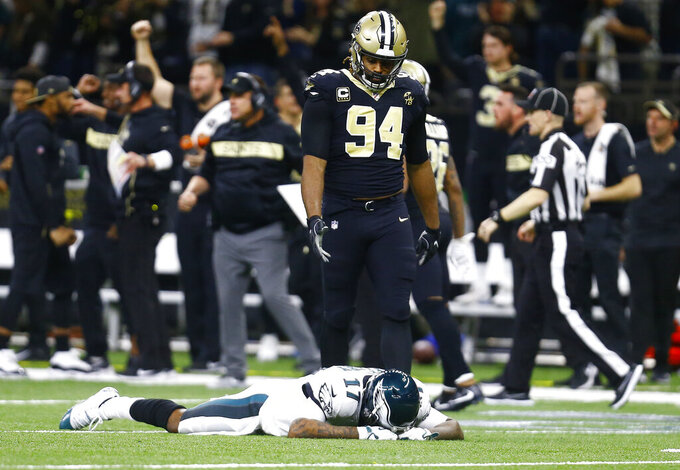 He is among a trio of defensive linemen likely headed for more snaps against one of the best offenses in the NFL with a trip to the Super Bowl on the line.

Sheldon Rankins, the Saints' most productive interior defensive lineman, won't play in the NFC title game against the Los Angeles Rams — or any other game this season — after tearing his Achilles in the first quarter of Sunday's playoff victory over Philadelphia .

At the same time, the Saints sounded encouraged that the rotation of Onyemata, Tyeler Davison and rookie Taylor Stallworth did enough to help shut out the Eagles for three quarters.

"They played great," Saints linebacker A.J. Klein said after studying game video on Monday. "Our D-line group is very deep. We have the guys in that room to pick up the slack."

Yet Klein acknowledged there's quite a bit of slack to pick up.

Rankins was New Orleans' first-round draft choice in 2016 and his eight sacks this season ranked second on the club behind end Cameron Jordan.

"He's a dynamic player on the inside," Klein said, adding that Rankins is a rare player in the NFL who can be "stout against the run and hold off double teams, but to also be dynamic in the pass rush game."

"His presence on third-down pass rush and stuff will be missed, but I know we have the depth in our defensive line room to get the job done," Klein added.

"When Sheldon is out there, we have more of an understanding of making the adjustments and all that, just moving around on defense," Onyemata said.

Yet Onyemata asserted that the confidence among the remaining interior linemen has been growing all season and was only helped by how they played without Rankins against the Eagles.

"We've been playing pretty good the past couple weeks, having the guys step up and take more of a bigger role," Onyemata said.

But now comes arguably their toughest test against a Rams tandem of Todd Gurley and C.J. Anderson that combined for 238 yards rushing in a victory over Dallas on Saturday night — hence Onyemata's extra conditioning work, as well as mental preparation.

"If you go with a three-man rotation inside, you might have to do extra conditioning and just get your mind ready for more plays and expect more things," Onyemata said.

The Saints finished the season ranked second in the NFL against the run. Even with Rankins out most of Sunday, they allowed the Eagles just 49 yards rushing.

Meanwhile, coach Sean Payton sounded pleased with the amount of pressure New Orleans' defense applied on Foles, even though Foles was not sacked. Foles is known as a poised and savvy veteran who unloads the ball quickly, so the key against him is unsettling him enough to effect his accuracy.

"We made some adjustments. I thought we were able to pressure the quarterback," Payton said. "We did not get the sacks you are looking for but we did get the pocket pushed and I thought that really helped and guys on the back end made some plays."

They also will need to get pressure on Rams quarterback Jared Goff, who completed nearly 65 percent of his passes for 293 yards per game this season.

The last time the Saints hosted the Rams in early November, they gave up 35 points, but won because Drew Brees and Co. put up 45 .

"It was a shootout. It was back and forth all game long," Klein said. "I thought we played the run well the first time we played them. That's going to be challenge again this week. But I think being good on the play-action pass and eliminating deep shots over top will be crucial for us."