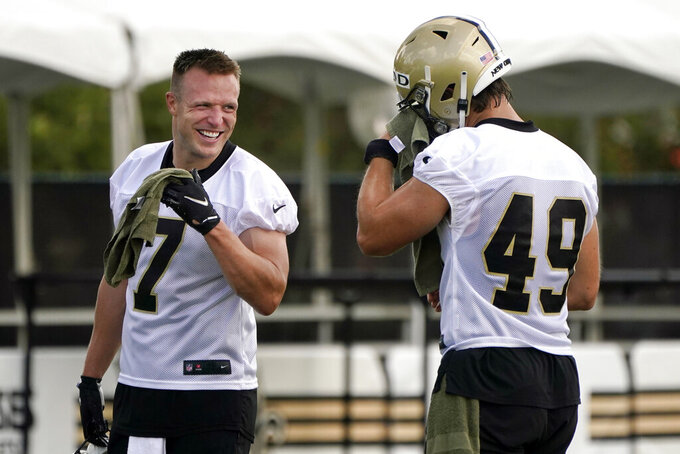 The former BYU quarterback doesn't deny his disappointment over no longer being on the QB track with his NFL club. But Hill says he sees the wisdom in the Saints' decision to shift his focus to the more physical tight end spot.

“Initially, I was a little bit surprised at how it was communicated," Hill said after practice on Tuesday. "But as we’ve gone down the road, as I’ve had further conversation, I think it makes perfect sense."

“I’m pretty reasonable," Hill added. "This isn’t necessarily what I want; it’s what’s best for the team — and I’m good with that.”

Hill no longer practices in a red jersey reserved for quarterbacks, who are not to be hit during practice. He now wears a white or black No. 7 jersey, along with a soft-shell helmet cover that the NFL has instructed linemen, linebackers and tight ends to wear during training camp to reduce exposure to concussions.

There was a time when previous Saints coach Sean Payton drew comparisons between the 6-foot-2, 220-pound Hill and another former BYU QB, Hall of Famer Steve Young. Such comments put Hill in the discussion to take over for Drew Brees, who retired after the 2020 season.

Hill, who turns 32 this month, got a chance to compete with Jameis Winston for the starting job during the 2021 preseason. After Winston won out, Hill went back to his utility role for most of last season — even after Winston's season-ending knee injury in Week 8. Not until the Saints lost four straight with Trevor Siemian starting did Payton tab Hill as the starter with six games left.

Despite playing through a painful foot injury (plantar fascia) and missing a game because of a positive COVID-19 test, Hill went 4-1, improving his career record to 7-2.

But this offseason, New Orleans signed Winston to a two-year extension and added veteran Andy Dalton as a backup.

In a phone call this spring, the Saints informed Hill — who has a stout build and runs well — that they wanted him to focus on his previous role as a utility player who not only handles designed QB runs, but also lines up at tight end or receiver, and plays on special teams.

“He’s reacted incredibly well," Allen said. "He’s a team guy. He’s going to do anything that the team wants him to do for us to be successful.”

During position group meetings, Hill is no longer with the QBs, but with the tight ends. Same goes for individual drills, which Hill concedes he needed to refine how he lines up in a three-point stance and run blocks.

“I’m still very raw in a lot of this stuff,” Hill said.

Meanwhile, Hill's transition has been slowed by injuries. His recovery from surgery to repair a late-season Lisfranc injury prevented him from participating in offseason practices. He returned for training camp, only to be sidelined by a displaced rib. He's practicing again, albeit with a custom-fitted rib protector.

But Allen noted that, for practical purposes, there wouldn't be a major change in Hill's usage from the past several seasons.

“I feel like there’s this big discussion about Taysom Hill,” Allen said. "It’s not the primary quarterback role, but we’re still going to see him in a lot of those positions that we’ve played him at throughout his time here.”

As a runner, Hill has averaged 5.4 yards per carry for his career, gaining 1,183 yards on 221 carries since 2018. Last season, Hill's rushing highlights included a 44-yard touchdown.

As a passer, he's competed 64.5% (172 of 268) of career throws for 2,025 yards and eight TDs against eight interceptions. That's an area where Hill expects to see a considerably diminished role — and he can live with that.

“I would say I’m at peace with knowing how the league works," Hill said. "Things aren’t up to me. And so with that being said, I’m willing to do what I need to do to help us win football games.

“And I love playing,” Hill noted. "So, it creates opportunities for me to add value and be on the field and compete.”

NOTES: Winston, who left practice on Monday with a foot injury, did not practice on Tuesday. Allen said the diagnosis was a right foot sprain. “He's really day to day. I don't think it's going to be that big of a challenge,” Allen said. "Certainly we're going to make sure we get him back healthy before we put him back out there." Allen said Winston won't play in the preseason opener on Saturday night in Houston.