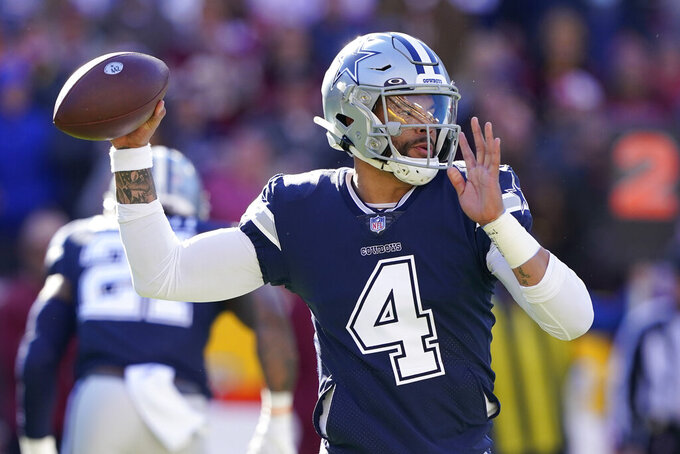 Dallas Cowboys quarterback Dak Prescott (4) throwing the ball during the first half of an NFL football game against the Washington Football Team, Sunday, Dec. 12, 2021, in Landover, Md. (AP Photo/Alex Brandon)

FRISCO, Texas (AP) — A slumping Dak Prescott has become a danger to comfortable fourth-quarter leads for the Dallas Cowboys in the star quarterback’s first $40 million season.

A team long identified by offense can thank the defense for a three-game lead in the NFC East with four to go after a 27-20 victory at Washington. It was a second consecutive road victory that would have been easier with points instead of picks from Prescott late.

The 2016 NFL Offensive Rookie of the Year has two sub-60 passer ratings in a four-game span for the first time in almost four years. His 3-3 record since returning from a calf injury probably would be worse without a defense led by this year's emerging rookie star, linebacker Micah Parsons.

“We’ve created these high expectations and high standards and we have them for ourselves,” said Prescott, who is in the first year of a $160 million, four-year contract. “Just as much as the outside world isn’t pleased, we’re not. I guarantee we care a whole lot more than the outside world about what we’re doing.”

The Cowboys (9-4), who finish a three-game road set Sunday at the New York Giants, are headed to the playoffs barring a collapse. But the offense is going in the wrong direction.

A unit that led the NFL in points and yards per game when Prescott injured the calf in a 35-29 overtime win at New England has slumped to 11th in both categories in the six games since he returned. In his first six starts, Prescott had 16 touchdown passes, four interceptions and a 115.0 passer rating, Since then, those numbers are eight, six and 82.8.

A fourth-quarter interception in a 27-17 victory over New Orleans two games ago was merely an inconvenience. Prescott's pick-6 Sunday gave Washington a realistic chance to finish a rally from a 27-8 deficit in the final five minutes.

“I wouldn’t say I’m concerned at all,” said running back Ezekiel Elliott, whose ailing right knee is part of the problem for the offense. “We knew it would be tough. We do have to play a lot better. We have to celebrate this win. We can’t be mad about a win.”

Dallas had all the most important pieces on the defensive line for the first time this season against Washington, and it showed. Forget for a moment about the sensational Parsons, who still lines up as a pass rusher at times and had two sacks, one of which forced a fumble returned 37 yards for a touchdown by defensive end Dorance Armstrong.

Randy Gregory tipped and intercepted a screen pass before getting a sack later in his return after missing four games with a calf strain. DeMarcus Lawrence had his first sack of the season in his second game since returning from a broken foot that kept him out since the opener.

A seven-week run as the NFL's No. 1 offense in total yards is over. The way Dallas has been playing, it seemed inevitable.

Three-and-out possessions are way up over the past five weeks, and it's been puzzling how a unit that was so dominant early in the season played poorly enough to keep New Orleans and Washington in the game when the defense was generating stops and turnovers.

While the returns of Lawrence, Gregory and Gallimore decrease the need for Parsons to line up as a pass rusher, it's clear defensive coordinator Dan Quinn will continue to find ways to use him in that role.

TE Dalton Schultz matched his season low with one catch, for a season-low 4 yards. The Dallas offense is generally more efficient when Schultz is involved, particularly on third down.

LT Tyron Smith will miss at least one more game after aggravating the left ankle injury that has already cost him three games. He didn't return after getting his leg rolled up on in the third quarter.

27 — total takeaways, which has Dallas in position for the most in a season since getting 43 in 1987. The Cowboys have reached 30 just once in the past decade.

With the division title all but secured, the Cowboys can focus on still being in the mix for the No. 1 seed in the NFC when Arizona visits Jan. 2. The only way that's realistic is if Dallas beats the Giants and wins the quick rematch with Washington on Dec. 26. The Cowboys will need help, too. They're the fourth seed right now.