SoFi Stadium videoboard first of its kind in many ways 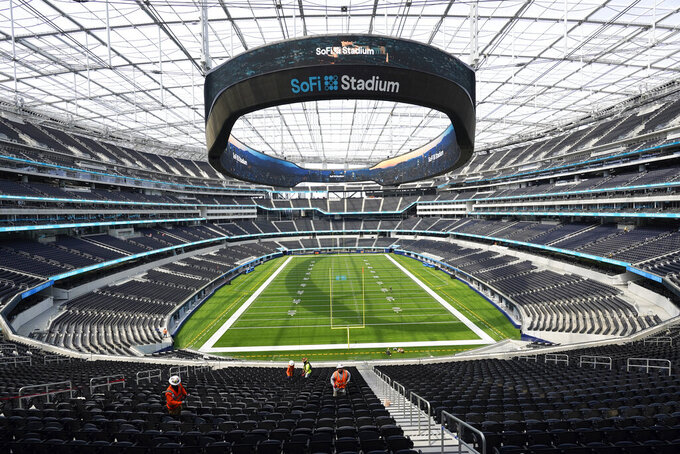 INGLEWOOD, Calif. (AP) — SoFi Stadium is striking for many different reasons, but the signature element of the opulent new home of the Los Angeles Rams and Chargers hangs 122 feet above the playing field.

That would be the world's first dual-sided, center-hung videoboard, which marks another evolution in scoreboard development and how fans consume information during games.

The videoboard at AT&T Stadium, fittingly nicknamed “JerryTron” after Cowboys owner Jerry Jones, tried to bring an arena experience at a much larger scale to a stadium. The “Haloboard” at Atlanta's Mercedes-Benz Stadium was the first 360-degree board at a stadium when it opened in 2017.

Three years later, this board has upped the ante. SoFi Stadium hosts its first game Sunday when the Rams welcome the Dallas Cowboys.

All the videobard needs now is a cool new nickname. Up until recently it was called the Oculus, until there started to be some confusion with the virtual reality company that has the same name.

Pete Soto, the Chargers' vice president of fan experience and Bolt Productions, might have come the closest to coining something that could stick when he called it “The Mothership."

“Everyone was interested in taking it to the next level. It is connected to the architecture and allows us to create this canvas for digital immersion,” said Lance Evans, the stadium’s main architect from design firm HKS. “The way that the videoboard interacts as you walk around the venue is the beautiful piece of the design. You always feel like you are connected to it but it doesn’t scream for your attention.

The way that we’ve created the elliptical shape with the aperture that allows light to flow through — it is a complementary shape and form."

SoFi Stadium's videoboard is the largest ever created, with 70,000 square feet of digital LED space. It is also the first and only board that is capable of 4k video from end to end.

At 2.2. million pounds, it took nearly six months to construct and raise. The structure is 120 yards long and the largest panels are 40 feet tall.

The videoboard was a large part of renderings of the stadium. While the renderings were very accurate to real life, the size of it still is striking.

“The accuracy gives you a sense of deja vu. The one thing the renderings couldn’t reflect is when you stand in this building, it feels like this indoor-outdoor experience,” said Rams chief operating officer Kevin Demoff.

Samsung manufactured the video display, making this the fourth NFL stadium where they have videoboards. Mark Quiroz, Samsung's vice president for product marketing, said one of the biggest challenges was trying to make sure the construction could take place while everything else was going on around the complex.

In the three months since the board was lifted, it has been mainly testing to make sure the display was consistent throughout all seating levels.

“We want that screen to look as perfect as it can be along with there being a perfect balance,” he said.

When it comes to what can go on the board, there really aren't any limits. Soto worked with the “Haloboard” in Atlanta for two years before joining the Chargers last year. He sat in seats at different levels and tested many different formats.

The size of the board allows for multiple feeds where fantasy stats can be showed along with instant replays, live action or multiple events. There also can be the possibility of showing other games.

“It is an amazing technology. Probably more than what we expected,” Soto said. “When you look at the quality and the clarity and the color, it is phenomenal. It really is one in a million.”

While fans aren't allowed into Rams or Chargers games for the foreseeable future because of the coronavirus pandemic, both teams will be able to put the board through many different tests to come up with the best presentation format.

But there is one group who will be able to see it this season — the players.

“The video board is dope, just the way it circles the whole field. It’s going to be exciting and hard not to watch," Chargers receiver Keenan Allen said.