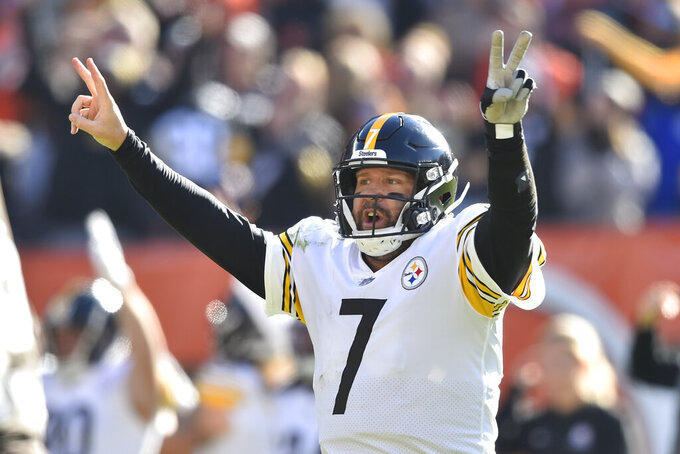 Pittsburgh Steelers quarterback Ben Roethlisberger celebrates after a 2-yard touchdown pass to tight end Pat Freiermuth (88) during the second half of an NFL football game against the Cleveland Browns, Sunday, Oct. 31, 2021, in Cleveland. (AP Photo/David Richard)

OPENING LINE: Steelers by 6 1/2, according to FanDuel SportsBook.

TURNOVER DIFFERENTIAL: Bears minus-3; Steelers minus-1.

BEARS PLAYER TO WATCH: QB Justin Fields. The first-round draft pick is starting to get comfortable as the season reaches the midway point. He played spectacularly at times last week against San Francisco. The next step in his development is getting going a passing attack that ranks dead last in the NFL. The Bears are the only team in the league that has more yards rushing (1,093) than passing (1,019).

BROWNS PLAYER TO WATCH: LB T.J. Watt. Two months after signing a contract that made him one of the highest-paid defensive players in the league, Watt is proving to be worth every penny — and then some. He's had at least one sack in five of the six games he's played and his 8 1/2 sacks total ranks third in the league.

KEY INJURIES: Bears star LB Khalil Mack (foot) missed his first game since 2018 last week. ... Coach Matt Nagy, who is vaccinated, had to watch the San Francisco game on TV after testing positive for COVID-19. ... S Eddie Jackson (hamstring) exited last week after he was injured on the second play from scrimmage. ... RB Damien Williams (knee) and TE J.P. Holtz (concussion protocol) were hurt against the 49ers. ... RB David Montgomery (sprained knee), on injured reserve, has missed the past four games. ... Steelers are relatively healthy. K Chris Boswell spent the week in the concussion protocol after exiting the win over Cleveland in the second quarter following a botched fake field goal. The Steelers are expecting Boswell to be available but signed former Jacksonville kicker Josh Lambo to the practice squad just in case. Tight end Eric Ebron is dealing with a hamstring injury that forced him to sit out last week.

SERIES NOTES: The Bears have won each of their last three meetings with Pittsburgh, including an overtime win at Soldier Field in 2017 remembered mostly for former Steelers offensive lineman Alejandro Villanueva standing on the field for the national anthem while his teammates stood in the tunnel. ... Chicago blew out Pittsburgh in its last trip to Heinz Field, a 40-23 triumph on Sept. 22, 2013. ... The Bears are 7-6-1 all-time in the Steel City in a series that dates back to 1934.

STATS AND STUFF: The Bears have lost three straight. ... Chicago got torched for 467 yards vs. San Francisco — its highest total since allowing 541 in an overtime loss at Miami on Oct. 14, 2018. It was also the second straight game the Bears gave up more than 30 points and 400 yards. ... The Bears are tied for fourth in the NFL with 21 sacks; they had none last week. ... Chicago gave up points on seven consecutive possessions against San Francisco. ... Fields is coming off probably his best all-around game, throwing for 175 yards and rushing for 103, making him the first Chicago QB to run for 100 since Bobby Douglass in 1973. He had a spectacular 22-yard touchdown run in which he spun from at least two defenders and avoided a few more, as well as a neat TD pass to a diving Jesse James. ... Rookie RB Khalil Herbert has 351 yards rushing, all but seven in the past four games. ... K Cairo Santos has made a club-record 38 consecutive regular-season field goals, the longest active streak in the NFL and fourth-longest all-time. ... Steelers head coach Mike Tomlin is tied with Hall of Famer Bill Cowher for second on the team's all-time win list. Cowher went 149-90-1 from 1992-2006. Tomlin is 149-81-1 since replacing Cowher in 2007. ... Steelers rookie RB Najee Harris was NFL Offensive Rookie of the Month for October, piling up 480 scrimmage yards and four touchdowns in four games. ... The Steelers are nearly unbeatable at home on Monday night. They are 27-5 in Pittsburgh since “Monday Night Football” began in 1970, including 19 straight wins. Their last Monday night loss came on Oct. 14, 1991 against the New York Giants. Only four players on Pittsburgh's active roster were alive on that day, QB Ben Roethlisberger, DE Cam Heyward, K Chris Boswell and CB Joe Haden. ... Pittsburgh's .662 winning percentage (49-25) on Monday night is the highest the NFL. ... The Steelers' defense has yet to produce a multiple-turnover game in 2021. The unit had 10 such games in 2020. ... Pittsburgh's rebooted offensive line is starting to jell. The Steelers have allowed four sacks over their last three games after giving up 10 during their first four, though it has surrendered at least one sack each week.

FANTASY TIP: Might be wise to skip starting anybody in this one in what figures to be a low-scoring contest between teams that rank near the bottom in the league in points per game. Best bet might be to start Harris, who averaged 26.25 touches and one touchdown a game in October. Or either defense.