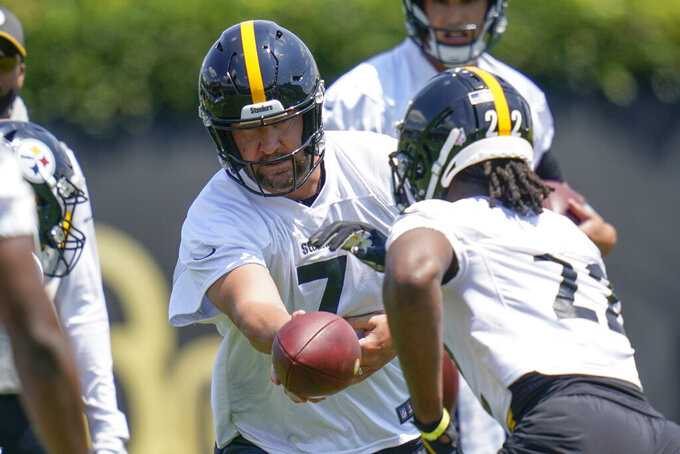 PITTSBURGH (AP) — The Pittsburgh Steelers experienced a significant amount of turnover during the offseason, yet they opened training camp on Thursday with the same lofty Super Bowl expectations.

“Everybody in the NFL has the same goal, and that’s to win a Super Bowl,” veteran quarterback Ben Roethlisberger said. “It doesn’t matter if you come from another team, if you’ve been here for a long time, or if you’re a rookie. Everyone wants the same thing. It’s a matter of getting on the same page at the right time.”

Roethlisberger took a pay cut to return for an 18th NFL season, but the 39-year-old signal caller will do it playing behind a revamped offensive line. Maurkice Pouncey retired and David DeCastro was released with a “non-football injury.” Alejandro Villanueva and Matt Feiler left in free agency. Pouncey, DeCastro and Villanueva combined for 17 Pro Bowls.

“I’ve been blessed to have a lot of older guys that have been here for a numerous amount of years,” Roethlisberger said. “To not have that is definitely different, but it’s just Day 1.”

Head coach Mike Tomlin said Thursday that center Kendrick Green, the team’s third-round pick out of Illinois, will start the Hall of Fame game against Dallas on Aug 5.

Zach Banner practiced on Thursday after tearing an ACL during Week 1 last season, while Chukwuma Okorafor shifts to left tackle and Kevin Dotson returns for his second season at guard. Trai Turner was signed hours after DeCastro was released, and B.J. Finney also brings veteran experience up front.

The Steelers also suffered significant losses from a defense that was ranked among the league’s best last season. They lost linebacker Bud Dupree and cornerback Mike Hilton to free agency, and also released cornerback Steven Nelson in a salary cap-related move. Veteran linebacker Vince Williams also made a surprise retirement announcement on the eve of the team’s first workout earlier this week.

“It’s not easy to replace all of those guys,” Roethlisberger said. “But we have guys who are willing and capable and excited to fill those roles. They want to do everything they can to be the best they can be, and we’re excited to see what they can do.”

The Steelers expect their restructured offensive line to clear the way for former Alabama standout running back Najee Harris, the team’s first-round draft pick. The Steelers plan to feature Harris and put a renewed emphasis this season on improving the run game, which finished last in the NFL in yards rushing in 2020.

“There’s an expectation that those guys are going to deliver, and I’m not going to be surprised when they do,” Tomlin said. “As a matter of fact, we expect them to. You can write a rags-to-riches tale, like we’re starting in the basement, but we don’t see it that way.”

Pittsburgh started a franchise-best 11-0 in 2020, en route to a 12-4 record and their fourth AFC North title since 2014. But the Steelers stumbled down the stretch with losses in five of their final six games, including a 48-37 blowout against Cleveland in the first round of the playoffs.

Roethlisberger, who missed most of 2019 because of reconstructive right-elbow surgery, admitted that his arm felt “fresher” on Thursday compared to last season at this time.

“At this time last year, I had thrown thousands of footballs trying to be ready for the season,” Roethlisberger said. “(Thursday) was the first day I threw a ball since minicamp, other than throwing to my son in the backyard. It feels like more normal of an offseason. I just think that physically I’ll feel better in terms of my arm.”

Roethlisberger still threw for 3,803 yards with 33 touchdowns and 10 interceptions in 15 games last season. The Steelers' passing game ranked seventh in the AFC and 15th in the NFL, but a non-existent run game, and a predictable short passing attack helped contribute to Pittsburgh’s late-season struggles.

The Steelers opted not to renew Randy Fichtner’s contract in January, and they promoted Matt Canada – the team’s quarterback’s coach last season – in an effort to inject some life into an offense that sputtered down the stretch.

That has required Roethlisberger to take on the task of learning new verbiage, concepts and terminology associated with Canada’s offense. And while the two-time Super Bowl winner admits he glanced at his wristband “quite a bit” on the first day of training camp, he’s embracing the challenge.

“My daughter makes flash cards for me, and there have been some quizzes at home,” Roethlisberger said. “It has become as much of a mental offseason, as physical in terms of learning new things. It’s a little tougher, but I’m going into it full-speed ahead and trying to be the best that I can be.”

The same can be said for the Steelers and their new-look roster.