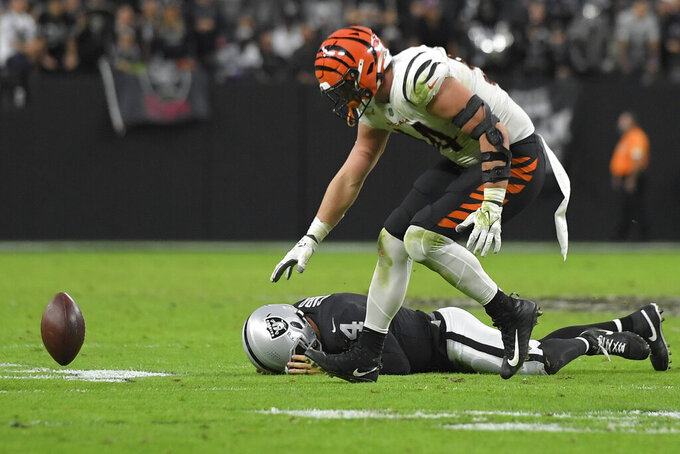 The offense is stagnant, the defense got gassed and the sloppy play with penalties and turnovers once again proved costly.

A Las Vegas Raiders season that had so much promise just a few weeks ago is spiraling out of control after a third straight loss, 32-13 to the Cincinnati Bengals on Sunday.

“We came out flat,” quarterback Derek Carr said. "It was terrible, there is no beating around it. Last couple of weeks we just take turns. Just really out of sync right now. Nobody is coming to save us, so we better figure it out.”

The Raiders (5-5) appeared on the right track when they won their first two games under interim coach Rich Bisaccia to head into the bye week with a 5-2 record. But they haven't won since returning, getting outscored 96-43 in losses to the New York Giants, Kansas City and Cincinnati.

The recent slide started after speedy receiver Henry Ruggs III was released after charged with felonies in a fatal drunken driving crash that killed a 23-year-old woman.

Carr has struggled to push the ball downfield without Ruggs threatening the defense, and the offense has looked mostly stale after a promising first two games without coach Jon Gruden.

Coordinator Greg Olson, who took over as play caller after Gruden resigned over the publication of his old offensive emails, has been unable to come up with a winning formula the past three weeks. Carr has struggled as well with four interceptions and two fumbles.

The Raiders are running out of time to get things fixed if they are to make it to the playoffs for just the second time in the past 19 seasons.

“Being a Raider fan for a long time, 20 years of this crap is enough,” Carr said. “I’m fed up. I just want to be part of the moment that changes. I want that so bad, that’s what keeps driving me. I get pissed off and I get upset. I stand up here, and I’ve done this way too many times than I like to do it.”

Pass rush. The most consistent part of the Raiders came through once again with Las Vegas getting three sacks and putting pressure on Joe Burrow all game. It's the fifth time this season the Raiders had at least three sacks; the 24 on the year have already surpassed last year's total of 21. Yannick Ngakoue's strip-sack on the first drive set up the Raiders at the Bengals 9, but they only managed a field goal.

Outside WRs. With Ruggs gone, Bryan Edwards and Zay Jones have failed to pick up the slack. Jones has three catches for 62 yards on nine targets the past three weeks, while Edwards has three catches for 88 yards and a TD on eight targets in that stretch. Edwards wasn't targeted on Sunday. DeSean Jackson was signed to add the speed element but wasn't targeted in the passing game Sunday and had one carry for 4 yards.

Darren Waller. The Raiders struggled to get the ball to their top playmaker last week but he had seven catches for 116 yards on eight targets on Sunday. Only four of those targets came in the first three quarters when the game was close, so they could still do more work.

Bisaccia. After a promising start with back-to-back wins in his first two games as interim coach, Bisaccia has been unable to keep the Raiders at a winning level. The team has looked flat and sloppy the past few weeks with seven turnovers and several bad penalties.

1 for 7 0 -- The Raiders converted only one third down for the second straight game, the first time that has happened for them since at least 1991. The Raiders had only two games with only one third-down conversion from 2013-20 before doing it in back-to-back weeks. Las Vegas failed on 14 straight attempts over the two games before getting a garbage-time conversion. The Raiders are last in the NFL with a 27.1% conversion rate since Gruden resigned, down from 41.4% in five games with him as play caller.

The Raiders visit Dallas on Thursday.