Tannehill only had mild symptoms, now back finetuning timing 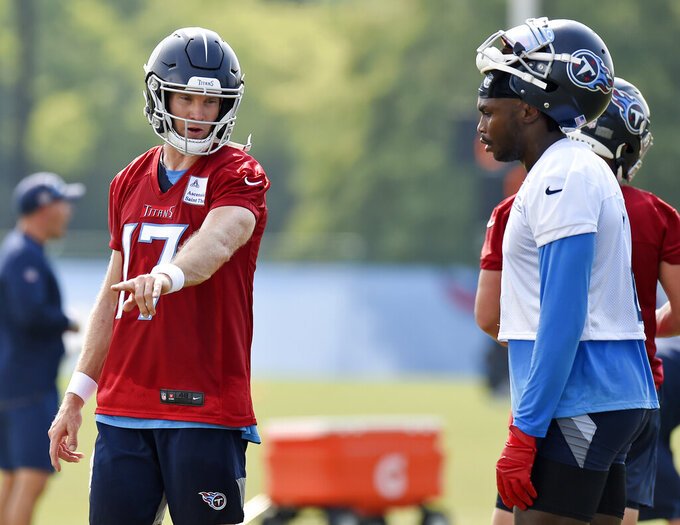 NASHVILLE, Tenn. (AP) — Ryan Tannehill only got vaccinated because of the NFL's COVID-19 protocols. Turns out the shots helped the Tennessee quarterback deal with only mild symptoms after testing positive in August.

"Then I was able to bounce back,” Tannehill said Wednesday. "So thankfully it didn't hit too hard. Kind of went through my house. My wife got it after I did. She had it a little worse than I did. But overall, it was a couple of days and and we were able to bounce back.”

Aside from coach Mike Vrabel who tested positive Aug. 22, Tannehill was the highest-profile starter sidelined by the latest COVID-19 outbreak on Aug. 26. He was cleared Sept. 4. Tannehill says he was able to take part in meetings via Zoom while also working out and running trying to be ready when cleared.

“Tough situation, don’t want to be missing time for an illness," Tannehill said. "But if I had to get it, it wasn’t terrible timing just kind of where it fell and theoretically should be good to go the rest of the season.”

Lots of talking has helped Tannehill and Jones connect. Jones only joined the Titans in June after being traded by Atlanta. They discuss how Tannehill expects him to come out of routes and the adjustments Jones makes.

“Now that we’ve been able to get on the field a few times, just getting his body language down and his speed, which has been good,” Tannehill said. "I feel like we had a really good day together on Monday. And ... continue to to build on that.”

Jones had just returned to practice himself Aug. 23 after three weeks only to see Tannehill go on the reserve list after two practices together. Tannehill said he studied Jones on video and was impressed by how the 6-foot-3, 220-pound receiver moves.

“It was pretty incredible to see his transition just at his size and speed,” Tannehill said. "So excited to get to work with him this year.”

The Titans also got back two starters Wednesday with center Ben Jones and right guard Nate Davis both returning from the reserve/COVID-19 list. Each practiced fully Wednesday and weren't listed on the injury report. Only offensive lineman Cole Banwart and rookie safety Brady Breeze remain on the reserve list.

Vrabel said it was good to have Jones and Davis back.

Pro Bowl receiver A.J. Brown, scheduled to start opposite Jones, did not practice Wednesday with an injured knee. Brown practiced Monday and was in individual drills open to reporters without any brace or wrap on either knee.