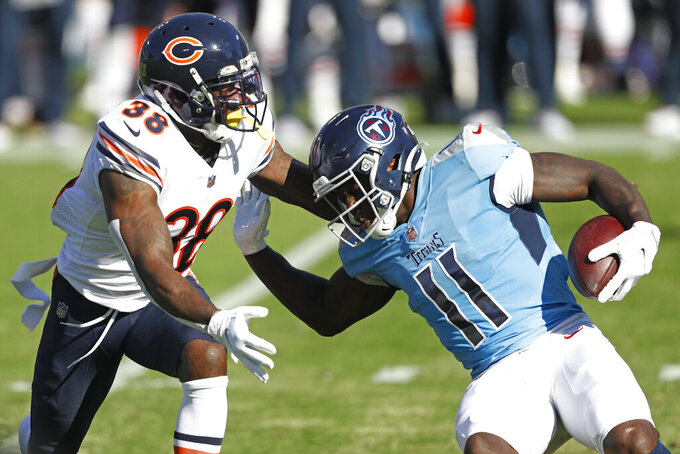 NASHVILLE, Tenn. (AP) — A.J. Brown makes it clear. He sees himself as a very physical wide receiver for the Tennessee Titans.

“I don’t worry about getting hit,” Brown said. “I try to do the hitting.”

Midway through his second NFL season, it's fair to say Brown is making a mark. After leading all rookies with 1,051 yards receiving, he's joined Hall of Fame receiver Randy Moss as the only receivers since 1970 to pile up at least 75 catches with 12 TDs while averaging at least 18 yards per reception.

“My confidence is still growing,” Brown said. “I like to tell myself I haven’t done anything yet, never too high, never too low. I’m still working every day, always trying to improve something to my game. I am nowhere I want to be, but I feel like I am getting there.”

A second-round pick out of Mississippi in 2019, the Starkville native currently has a TD catch in five straight games. That's the second-longest streak in the NFL right now after he had four catches last week for 101 yards and a touchdown.

Brown showed off his hands in a win over Chicago by grabbing a high pass and running for 38 yards, even stopping to let a pair of defenders go past him to pick up a few more yards at the end. He later fought off a defender for a perfectly thrown ball, ran and dove for the goal line, stretching out to get the ball over the goal line for a 40-yard TD.

“I know A.J. has high expectations for himself, and so do we,” Titans coach Mike Vrabel said. “He’s got good play strength, really good hands.”

Brown finished third in the voting last year for the AP Offensive Rookie of the Year. Despite missing two games with an injured knee, he's leading the Titans with 31 catches for 347 yards and six TDs.

Only Odell Beckham Jr. (eight) and Victor Cruz (six) have had more 100-yard receiving games with at least one TD catch within their first 20 games since 1970. Brown is tied with T.Y. Hilton of the Colts, Martavis Bryant, Julio Jones, Anquan Boldin, Marcus Robinson and Moss with five each in that span.

“We're constantly trying to expand his role," Smith said. "And as his route tree grows, I don't like to put a cap on something ... We're just trying to focus every week just to get better offensively, and he does a great job individually working on his craft.”

If Brown catches a TD pass Thursday night against Indianapolis (5-3), he would be the franchise's first player with such a streak since Bill Groman set the record with an eight-game streak in 1961 when this team was in the AFL as the Houston Oilers.

Ryan Tannehill says he sees Brown growing into a more complete receiver with the Titans asking him to do more this season than last year.

“He's taken that on his shoulders and done well with it," Tannehill said. “We're happy with the growth that he's shown and just want to continue pushing him to make more and more plays for us because obviously he's very talented and made big plays already.”