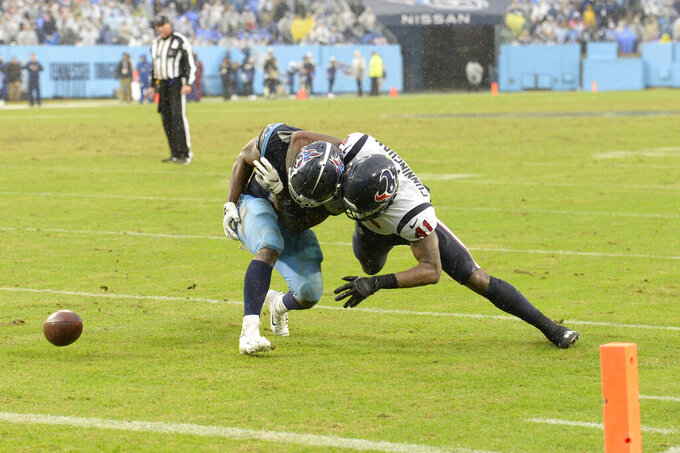 Tennessee Titans running back Dontrell Hilliard, left, fumbles the ball as he is hit by Houston Texans outside linebacker Zach Cunningham (41) in the second half of an NFL football game Sunday, Nov. 21, 2021, in Nashville, Tenn. Titans tight end Anthony Firkser recovered the ball in the end zone for a touchdown. (AP Photo/Mark Zaleski)

NASHVILLE, Tenn. (AP) — The Tennessee Titans claimed inside linebacker Zach Cunningham off waivers from the Houston Texans on Thursday, a move they hope will bolster their injury-riddled group.

Cunningham, 27, was released by the Texans (2-10) on Wednesday after being late to and missing meetings this season.

Cunningham, who played at Vanderbilt in Nashville, has familiarity with the Titans' defense, having played for coach Mike Vrabel when Vrabel was Texans linebackers coach and later defensive coordinator. Titans defensive coordinator Shane Bowen was also on the Texans staff before joining the Tennessee.

Starting inside linebackers David Long and Rashaan Evans have missed multiple weeks with injuries, though Evans has practiced the past two days. The team also placed rookie inside linebacker Monty Rice on injured reserve last week with an ankle injury.

Cunningham signed a four-year extension worth $58 million with the Texans that runs through 2024. By claiming the contract, the Titans are responsible for $275,000 in base salary this year. Beginning next season, there is a $10 million base that is guaranteed against injury in the contract. Cunningham is set to make $11 million in base salary in 2023 and $12.5 million in 2024.

The Titans had just 51 players on their roster as of Thursday, so they will not have to make a corresponding transaction to make room for Cunningham. Cunningham had 63 tackles in 10 games for Houston, including 28 solo stops.

Cunningham will be the 87th player to play for the Titans this season. Tennessee broke the record for most players used in a season two weeks ago at New England when four new players participated, bringing the season total to 86.