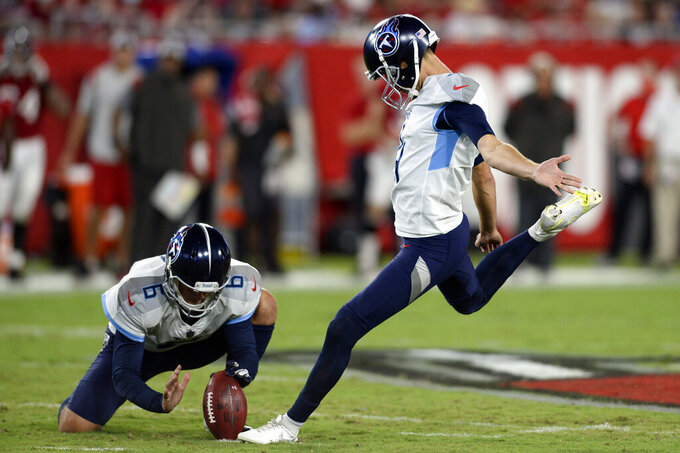 NASHVILLE, Tenn. (AP) — The Tennessee Titans once again are starting a season with kicking issues after adding Sam Ficken on the injury report Friday with a right groin muscle problem.

The Titans initially entered training camp with Tucker McCann and Blake Haubeil competing for the kicking job. They cut Haubeil and claimed Ficken off waivers from the New York Jets on Aug. 1. McCann was kicking well when his right ankle was hit on a field goal in the preseason opener.

Ficken had been kicking so well coach Mike Vrabel said the kicker looked like his leg had gotten stronger. Now the Titans have to hope he's available Sunday for the season opener, hosting Arizona.

That's also why they signed Badgley, who has three years of NFL experience playing 34 games with the Los Angeles Chargers. He has made 52 of 65 field goal attempts and 82 of 86 extra points. His career long is 59 yards, and he's made all 30 attempts inside 40 yards.

A year ago, the Titans signed four-time Pro Bowl kicker Stephen Gostkowski on Sept. 3 and had to promote Sam Sloman from the practice squad for the regular-season finale when Gostkowski was on the reserve/COVID-19 list. Sloman kicked the winning field goal off the right upright to clinch the AFC South title.

“He was out there consistently and did a nice job,” Vrabel said of Quessenberry. “He has helped us function here offensively at the end of last year and now through training camp. That is a testament to him and that unit.”