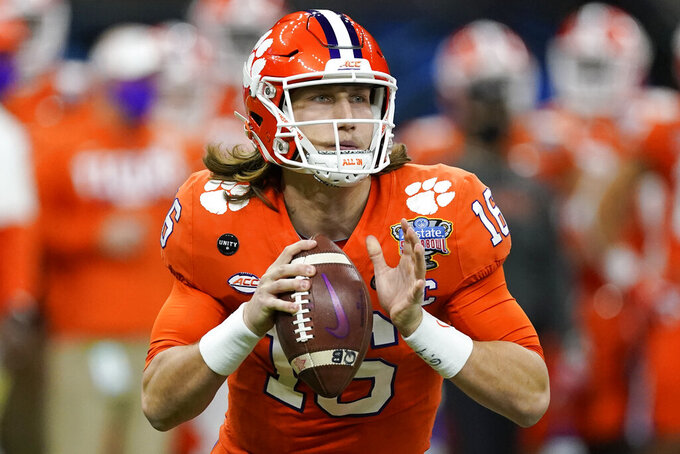 About the only certainty in the confounding 2021 NFL draft is Trevor Lawrence going to the Jaguars with the first overall pick.

Beyond that, it's really anybody's guess following the most unorthodox of run-ups to the league's annual parade of prospects.

COVID-19 opt-outs and shortened or shelved seasons in the fall were followed by the combine cancellation and the elimination of in-person interviews this spring because of the pandemic.

Teams had to rely on Zoom calls to get to know players.

“I’ve said this before: what we’re doing is educated guessing,” Giants general manager Dave Gettleman said. “So, this makes us a little more uneducated, not having this personal touch with these players.”

Although all 32 teams received the videos from all 103 pro days, the lack of uniform, electronic timing resulted in suspect 40-yard dashes on fast surfaces clocked by hand.

“It’s hard to compare apples to oranges. You’d like to have everybody run on the same surface,” Chargers GM Tom Telesco said. “That’s the biggest part of the Indianapolis combine when the players go in and get their physicals done.”

Only 150 players went to Indy this month for physicals, leaving spotty medical reports on many of the athletes heading into the 259-pick draft.

All of this should result in a wild weekend of buildup for the 2021 season, when the NFL hopes sellouts replace opt-outs and normalcy returns in sports and society alike.

“It’s a very complicated draft," ESPN analyst Mel Kiper Jr. said. “I always say, ‘mysterious/complicated’ draft” because teams didn’t have uniform 40-yard dash times and other measurements and didn’t get to poke and prod the prospects themselves.

“It’s a year like no other,” agreed Bengals player personnel director Duke Tobin. “There are players in this draft who have really only played one year of college football. You’re projecting.”

More so than ever.

“There are guys in this draft that (come) August it’ll be the first time in 20 months they’ll have put pads on,” Gettleman marveled. “And some of those guys are very, very highly rated.”

Hall of Fame executive Bill Polian called this year's draft a throwback to a bygone era before technology changed the scouting world.

“I think it will probably be less homogenous than it’s been in the past — which is not a bad thing,” Polian said.

NFL Network analyst Daniel Jeremiah said consensus this year was as elusive as Tyreek Hill is in man coverage.

“Look, group think is a real thing," Jeremiah said. “When you get scouts that pal around together, we go to the same schools and you’d be at the same places watching the same players. Everybody ends up talking and and you kind of end up getting some consensus on some players.”

Same thing at the combine.

“So there’s just been less gathering. I think in some ways it’s better because you get individual evaluations," Jeremiah said. "But I can’t remember more variance just talking to buddies around the league about specific players where the (evaluations) are so wildly different.”

“That makes it fun," he said. "I think a lot of teams that I’ve talked to have really tried to shrink their draft board more so than in years past.”

You know what else has dwindled?

The entire pool of candidates.

With the NCAA granting an extra year of eligibility because of the pandemic, a crush of players stayed in school. By mid-April, fewer than 700 players had signed a standard representation agreement with an NFL agent, about one-third the usual number.

That left this thinnest of draft classes with their college pro day performances to replace the one-stop scouting combine — unless they were lucky enough to get invited to the Senior Bowl, where every team got 15 minutes of face time with them.

The result of all these factors is a puzzling draft loaded at the top but blindfolded at the bottom.

“We had so many kids go back to school. That's what's going to impact the bottom half of the draft," Jeremiah said. “That’s why everybody that I talk to around the league just says, ‘We don’t know what the heck we’re going to do with the sixth- and seventh-round picks. If I can get rid of them I’m going to get rid of them' just because next year’s class, with those sixth- and seventh-round picks, are going to be really valuable.”

Risk-takers might find gems this year, but the temptation will be to load up on 2022 picks when the pool of prospects will be much deeper — and, the hope is, better vetted.

This weekend, "there's going to be less to know about the character of a person because you just haven't spent time around them,” ex-NFL executive Mark Dominik said.

“The Senior Bowl was 15 minutes, and a lot of GMs didn't even go to the Senior Bowl. So, they haven't really met the players."

Teams were allowed up to five one-hour videoconferences with prospects this spring, so that softened the blow of not getting to fly them in or interview them at the combine.

Still, team doctors couldn't get their hands on them.

Last year things didn’t shut down until after the combine, so teams had good medical reports on the top 330 or so prospects. This year, it’s less than half that.

However it all shakes out, Kansas State tight end Briley Moore has a bold prediction for this year's draft class that had to navigate such an unusual path to the pros.

“Ten years from now,” Moore said, "this class is going to be special just because of the mental toughness that everyone has built to go through to play a full season and offseason with the climate of the world right now.”