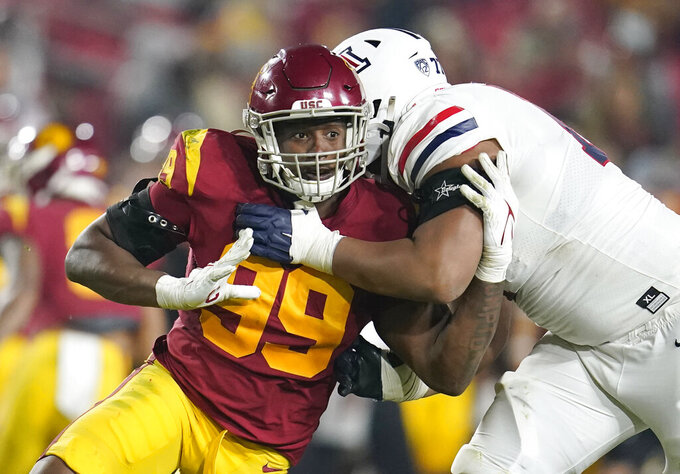 FILE - Southern California linebacker Drake Jackson (99) tries to pass-rush around the block from Arizona offensive lineman Jordan Morgan during the second half of an NCAA college football game Oct. 30, 2021, in Los Angeles. Jackson was selected by the San Francisco 49ers during the second round of the NFL draft Friday, April 29. (AP Photo/Marcio Jose Sanchez, File)

SANTA CLARA, Calif. (AP) — The San Francisco 49ers have had a distinct team-building philosophy since coach Kyle Shanahan and general manager John Lynch took over the team in 2017 to focus heavily on the trenches.

That led San Francisco to once again invest in the pass rush in the draft, using their second-round pick on Southern California edge rusher Drake Jackson.

The Niners took Jackson 61st overall in the NFL draft on Friday night, marking the sixth time in the past eight drafts that they used their top pick on a defensive lineman, including four of six seasons with Shanahan and Lynch at the helm.

“We've talked about since we’ve been here, our defensive line is very much at the forefront of this team,” Lynch said. “That’s the great equalizer in today’s defensive football. We zeroed in on just a couple of pass rushers that we thought were difference-makers. Otherwise we’d have turned to other needs. We really held out hope he could last to 61. We didn't think he would. We were tempted many times to move up. We sat back instead and I'm glad we did.”

That decision to wait instead of trading up allowed San Francisco to add to the offense late in round three, taking LSU running back Tyrion Davis-Price 93rd overall and SMU receiver Danny Gray with the 105th pick.

Jackson had 12 1/2 sacks in three seasons for USC and adds another edge rushing option for the 49ers across from star Nick Bosa. San Francisco had hoped Dee Ford could fill that role but he has been hampered by injuries and isn't expected back next season.

“As soon as I get out there, I might try to find him and get a handshake from him,” Jackson said about Bosa. “I’m trying to do and get in there and start getting the knowledge and things that I need to grow and be a monster like him. He’s literally a gremlin on the side. He’s a monster. He puts fear into tackles' eyes I want to be the same way.”

“I’d say he’s incredibly disruptive,” Lynch said. “He played in a bunch of different schemes and they moved him around a lot. So we think his best football is in front of him. Things such as quick disruption, something we study a lot, he was tops in the country."

He joins a group of defensive ends that feature Samson Ebukam, Kerry Hyder, Jordan Willis and Charles Omenihu and Kemoko Turay in the mix to complement Bosa.

Defensive line coach Kris Kocurek has gotten the best out of several pass rushers over the years and now has another piece to work with in San Francisco.

“I love to play for a coach that’s fired up like that and wants a lot out of his guys,” Jackson said. “It’s a challenge. I’m ready to take on that challenge.”

Davis-Price rushed for 1,003 yards and six TDs last season for LSU, averaging 4.8 yards per carry. This was the second straight year San Francisco used a third-round pick on a running back after taking Trey Sermon last year. But sixth-rounder Elijah Mitchell led the team with 963 yards rushing.

Gray adds a speed element to the Niners offense, running a 4.33 40-yard dash at the combine. Gray had 49 catches for 803 yards and nine TDs last season.

Shanahan said he believes both of those players can take some pressure off All-Pro receiver Deebo Samuel, who had a heavy workload last season as a wide receiver and lining up in the backfield as a running back.

Samuel has requested a trade but despite talk that something could happen during the draft, Shanahan said no one made an offer that was even close to being enough for a player who had 1,770 yards from scrimmage and 14 TDs last season.

Shanahan said he was surprised and “disappointed a little bit” by Samuel's trade request but that he remains confident the sides can work out a contract extension to keep Samuel in San Francisco past the 2022 season.

“Losing a player like Deebo, it's hard to see how that helps your organization,” Shanahan said. “You try to look into all aspects of it but nothing was even remotely close that we thought would be fair to us.”

This marked the first time since 1996 that San Francisco didn't have a pick in the first round. The Niners traded their 2022 and 2023 first-rounders to Miami last year to move up nine spots to take quarterback Trey Lance third overall.

Lance spent most of last season as a backup to Jimmy Garoppolo but is expected to take over as starter this season.