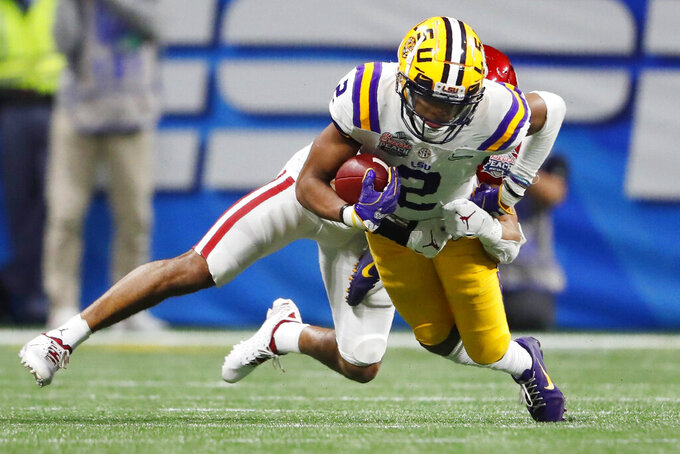 FILE - In this Dec. 28, 2019, file photo, LSU wide receiver Justin Jefferson (2) runs against Oklahoma cornerback Woodi Washington (5) during the second half of the Peach Bowl NCAA semifinal college football playoff game in Atlanta. This year’s NFL draft features a superb group of wide receivers, including Jefferson, who are expected to make immediate impacts in the NFL.(AP Photo/John Bazemore, File)

MINNEAPOLIS (AP) — The Minnesota Vikings chose LSU wide receiver Justin Jefferson with the 22nd pick in the first round of the NFL draft, with another selection in the queue on Thursday night waiting at No. 25.

The 22nd pick came from Buffalo as part of the trade made last month that sent restless wide receiver Stefon Diggs to the Bills and netted the Vikings three extra selections. They wasted no time trying to find a replacement with Jefferson, who was the fifth wide receiver to come off the board in an especially deep class at the position.

Jefferson, a late bloomer who played primarily in the slot while helping Tigers quarterback Joe Burrow win the Heisman Trophy for the national champions, set the program record with 111 receptions as a junior in 2019. Jefferson will join Adam Thielen and Tajae Sharpe as the top down-field options for quarterback Kirk Cousins.

The last time the Vikings made multiple picks in the first round was 2014, their first draft under coach Mike Zimmer when linebacker Anthony Barr was selected ninth and quarterback Teddy Bridgewater was taken at No. 32.

This is the 10th draft for general manager Rick Spielman with full authority over the roster, his 14th overall with Minnesota. This will be a pivotal draft for Zimmer and Spielman, both of whom have entered the final year of their contract and yet to receive an extension. The Vikings have made the playoffs three of the last five seasons, but the 2017 team that reached the NFC championship game has so far been the pinnacle.

The virus outbreak that shuttered all NFL facilities forced team officials to sequester in their homes for this most unusual draft, with Spielman directing the show from his study in the Twin Cities area and Zimmer logged in from his ranch home in northern Kentucky. The all-virtual nature of spring practices will likely make the transition process for rookies this year a rockier one, but the reality of the roster will force the Vikings to lean on at least a few of them at key positions.

The replacement process started with the signing of former Baltimore nose tackle Michael Pierce to fill in for Linval Joseph. Defensive end Everson Griffen has also departed. The Vikings haven't drafted a defensive end in the first round since Erasmus James in 2005.