Vikings try to 'live in today and tomorrow' this offseason 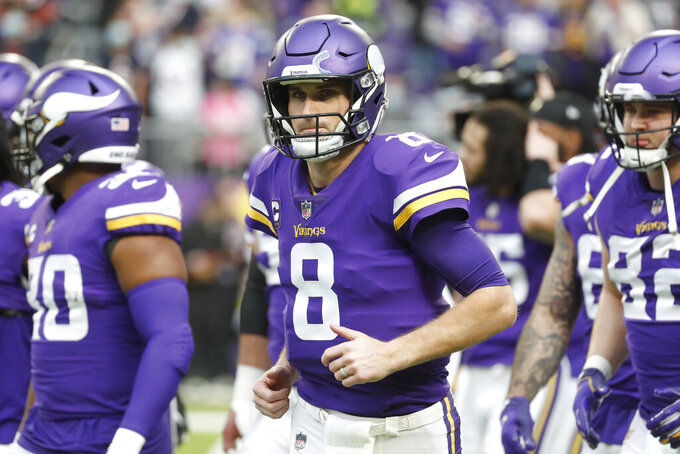 EAGAN, Minn. (AP) — When the Minnesota Vikings hired a new general manager and head coach, the natural expectation from outside was that major roster moves would follow.

The Vikings have, instead, kept their best and costliest players largely intact from a team that went 15-18 over the last two years.

Owner and president Mark Wilf spoke out last month against starting over, and based on the way general manager Kwesi Adofo-Mensah has directed the decision-making so far the Vikings are clearly unwilling to accept regression this year simply for the sake of longer-term progress.

“We’re all aligned on what our vision is and how we see the needs of our team this year, next year and overall our whole time horizon,” Adofo-Mensah said Wednesday. “I think when people look at teams they sometimes do it in a very binary way, and they ask, ‘Are you either all-in or tearing down and rebuilding?’ And I don’t really look at the world that way. The way we look at it is we’re trying to navigate both worlds. We’re trying to live in today and tomorrow.”

The term Adofo-Mensah used was “competitive rebuild,” though such labels are not his concern. As worn as the concept of process has become in corporate culture and pro sports — Adofo-Mensah said he considers former Philadelphia 76ers general manager Sam Hinkie, the original process champion, a mentor — that is exactly what the Vikings have launched under their new leadership.

The question that can't be answered until at least a couple of seasons are completed under the new regime, though, is how this approach is different than the way former general manager Rick Spielman and head coach Mike Zimmer stayed in win-now mode after reaching the NFC championship game four years ago.

“It’s just about adding great players, great pieces around the core that we have,” Adofo-Mensah said. “There's ways to do that in free agency or the draft or the trade market or player development, and so we’re just being careful about that, understanding the reality of where we are and what things give us the odds of getting where we want to be.”

The strategy of recent offseasons has left the Vikings with little flexibility under the salary cap, but rather than trade or release their way out of the situation they carved out the necessary space for affordable additions with the art of restructures.

With all the quarterback movement across the league over the last month, a trade of Cousins would have fit right in with the trend. The Vikings don't have an apprentice for him yet, though, and starting over at that position almost surely would have guaranteed a true restart for 2022.

Counting on the relationship new head coach Kevin O'Connell already has with Cousins from their year together in Washington and the offensive expertise on the new staff, the Vikings chose to do a third contract with him in four years and try to raise the ceiling for a proven and polished player who carries a decidedly average career record of 59-59-2 as a starter.

“We do things on our terms on the field, and I also think that applies to team building. Getting him in the fold, getting him to buy in, I really think was a win-win solution,” Adofo-Mensah said, adding: “That roster stability from that position allows us to really look open-minded and do things in our terms with the rest of the roster.”

Cornerback remains the greatest position of need, with only four currently on the roster and Cameron Dantzler the most experienced with his 17 career starts. Patrick Peterson is a free agent, but he has frequently expressed his interest in returning.

“You want to make sure you respect a player of his caliber, his expertise in this league, but also the reality of the situation we’re in from a salary cap standpoint,” Adofo-Mensah said. “Those conversations are ongoing.”