Washington could get QB Heinicke or Allen back vs. Cowboys 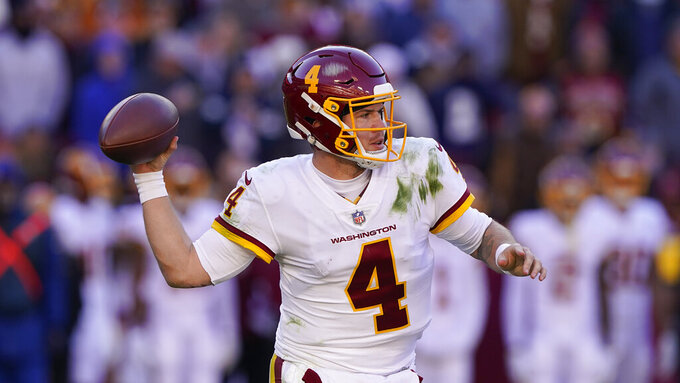 Ron Rivera said Wednesday that a quarterback is among the Washington players trending toward being cleared from COVID-19 protocol in time to play this weekend at the Dallas Cowboys.

That means the team could have Taylor Heinicke or Kyle Allen available for what’s essentially a must-win game Sunday on a short week. Washington fell to 6-8 with a 27-17 loss Tuesday night at the Philadelphia Eagles in a game pushed back 54 hours because of its coronavirus outbreak.

“I think the biggest thing is it’s whoever is available has got to be ready to go,” Rivera said Wednesday. “You want to win and you want to get in the playoffs. I really do believe all you need is a chance. A big part of it too, though, is being healthy at the right time, getting players back at the right opportunity, not having a big distraction (and) being able to stay focused as you trend towards something.”

Rivera would like Washington to be trending toward a fully healthy roster after more than a dozen players were out for virus-related reasons and a few others with injuries for the Eagles game.

Garrett Gilbert started at quarterback and handled himself well, especially considering he signed Friday after Heinicke went into protocol. He was 20 of 31 for 194 yards, and Rivera said Gilbert “gave us an opportunity.”

“To come here midweek and to be expected to not only start at quarterback but to help us try to get into the playoffs, there’s nothing but respect for him the way he came in,” wide receiver Terry McLaurin said.

“He picked up the things that we were doing for this game plan really quickly. He was good at communicating in the huddle. It was challenging for all of us, but he did his job and he put it all out there.”

Gilbert was not the reason for the loss, but Washington would feel more comfortable going into Dallas with Heinicke or Allen calling the plays and running the offense. It remains to be seen which other starters might be able to come back.

Washington did not turn over the ball against Philadelphia after recovering a couple of fumbles, a recipe it will need to replicate Sunday with the margin for error close to zero. Washington is still minus-5 in turnover differential this season.

The defense, particularly against the run, was a complete mess Tuesday night. Some of that was reserves like safety Jeremy Reaves and cornerback Darryl Roberts getting pressed into bigger roles than anticipated because of absences. But all around that can’t happen again against Dak Prescott and Ezekiel Elliott.

Defensive end Bunmi Rotimi picked up his first career sack when he brought down Jalen Hurts. Rotimi has been an intriguing prospect since training camp and is coming through given the opportunity.

Receiver Curtis Samuel missed another game, this time a hamstring injury after a lingering groin ailment cost him much of the season. It’s likely time for Samuel to land on injured reserve — again — and try it again in 2022.

Running back Antonio Gibson’s toe injury might be the biggest thing standing in the way of Washington pulling off an upset Sunday and staying in the NFC wild-card race. Rivera said Gibson’s injury is “very similar” to the turf toe that derailed his 2020 season.

“When it’s the big toe, that turf toe, you got to stick that foot in the ground and drive off of it and go,” Rivera said. “It hampers you a little bit, and it’s unfortunate because he is a big part of what we try to do offensively.”

The secondary is also an area of concern after cornerback William Jackson injured a calf muscle and safety Landon Collins hurt a foot at Philadelphia.

10½ — points Dallas is favored by this week, according to FanDuel Sportsbook. The betting line is up to double digits after opening at 8.

Players got the full day off Wednesday in the hopes they can rest up as much as possible for the short turnaround. Washington was probably helped a little by having its Week 15 game postponed until Tuesday, but now it makes things much more difficult against the rested Cowboys.