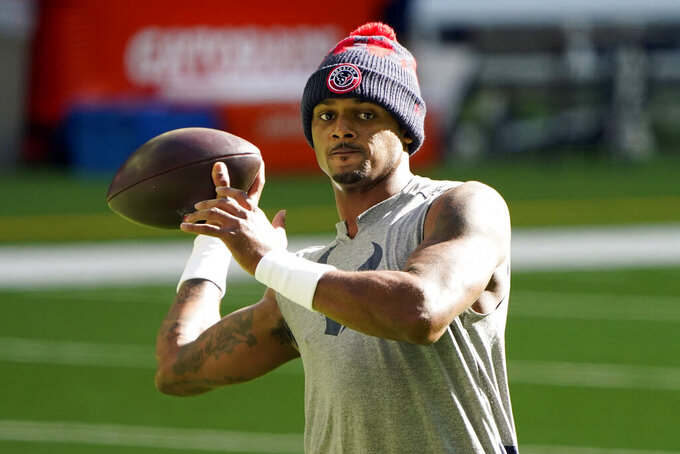 FILE - Houston Texans quarterback Deshaun Watson warms up before an NFL football game against the Tennessee Titans Sunday, Jan. 3, 2021, in Houston. Deshaun Watson stepped away from legal depositions and allegations of sexual misconduct on Thursday, March 24, 2022, to meet his new team. Watson arrived at Cleveland's headquarters in Berea, Ohio, the first step for him and a franchise investing in a player who has been accused by 22 women of sexual misconduct. (AP Photo/Eric Christian Smith, File)

CLEVELAND (AP) — Deshaun Watson's first day with the Browns was anything but routine — for him or his new team.

As Watson arrived in Cleveland for a physical and to perhaps finally answer questions about his past behavior, a second Texas grand jury declined to indict the quarterback, who has been accused of sexual misconduct by 22 women and still faces civil lawsuits.

A grand jury in Brazoria County met Thursday and listened to evidence related to one criminal complaint filed to Houston police by one of the 22 massage therapists, who have accused Watson of harassing or assaulting them during sessions.

The decision followed a similar one by a Harris County grand jury, which declined to indict Watson on March 11, triggering a pursuit by the Browns and several other teams for one of the league's top QBs.

Only hours earlier, Watson, wearing an orange throwback Browns jacket, arrived at the team's headquarters in Berea, Ohio. His trip to Ohio had been delayed so Watson could give depositions Tuesday and Wednesday in Houston in some of the civil lawsuits.

TV cameras captured Watson walking into the facility shortly before noon and being escorted upstairs. He underwent a physical, the last stage in finalizing his $230 million contract, and the Browns will introduce him at a 1 p.m. news conference Friday.

When he meets with media, it will be the first time reporters have asked Watson about the allegations or the Browns about their decision to trade for the 26-year-old with so much legal baggage.

The team said Watson will be joined by general manager Andrew Berry and coach Kevin Stefanski, but not owner Dee and Jimmy Haslam, who will do a separate Zoom meeting later in the day. No reason was given why the Haslams will be at the Watson news availability.

The Brazoria County District Attorney’s Office did not begin investigating the other complaint until the nine in Harris County were concluded, said Rusty Hardin, Watson’s lead attorney.

According to the woman’s lawsuit, during two massage sessions in November 2020 in a home in the Houston suburb of Pearland, in Brazoria County, Watson tried to get her to touch his penis and ejaculated during the session.

Watson has maintained his innocence while saying any sexual activity during the sessions was consensual.

In their lawsuits, the 22 women accused Watson of exposing himself, touching them with his penis or kissing them against their will. One woman alleged Watson forced her to perform oral sex.

Hardin said the Browns had been aware of the second grand jury before signing Watson last week.

A three-time Pro Bowler, Watson, who sat out the 2020 season after demanding a trade, stunned the NFL by choosing Cleveland to restart his career over several other teams after initially telling the Browns he wasn’t interested in playing for them.

However, he may have been swayed by the team's playoff-ready roster and the record-setting contract.

To this point, the Browns' only comments on their pursuit of Watson came in statements from the Haslams, who insisted the team went through a “comprehensive evaluation process” before deciding to pursue Watson and ultimately signing him.

The Haslams flew to Houston last week and met with Watson along with Berry and Stefanski, who watched film with the quarterback.

“He was humble, sincere and candid,” the Haslams said. “In our conversations, Deshaun detailed his commitment to leading our team; he understands and embraces the hard work needed to build his name both in the community and on the field.”

The Browns traded three first-round picks and six selections overall to the Texans for Watson, who may finally end Cleveland’s decades-long search for a franchise quarterback.

Watson, though, is still facing discipline from the NFL and it’s likely he’ll miss at least a portion of the 2022 season. The league is doing an independent investigation into Watson’s off-field behavior to determine whether he violated its personal conduct policy.

A person familiar with the league’s thinking told The Associated Press that placing Watson on the commissioner’s exempt list is a strong consideration because he intends to play for the Browns.

NFL Commissioner Roger Goodell didn’t have to exercise that right in 2021 because Watson sat out the entire season with the Texans.

The person, who spoke to the AP on condition of anonymity because the league’s investigation is ongoing, said Watson will not “get a pass” if the civil suits are settled. He would then face a suspension and be required to receive counseling before he would be permitted to play.

With Watson on board, the Browns are attempting to trade Baker Mayfield, the No. 1 overall pick in 2018 who had a rough, injury-altered 2020 season. Mayfield requested the trade after learning of the Browns’ interest in Watson.

On Wednesday night, Browns cornerback Greg Newsome II said he didn’t know Watson but he and his teammates were looking forward to meeting him.

“We’ve kind of just got to get a feel for him,” Newsome said at the Greater Cleveland Sports Awards. “We don’t know him as anything as of right now, so we’ve just got to get to know him.”