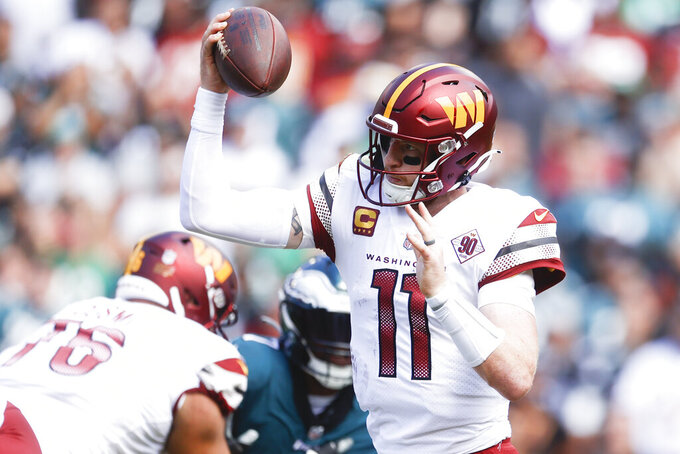 Washington Commanders quarterback Carson Wentz (11) fakes the pass during the first half of a NFL football game between the Washington Commanders and the Philadelphia Eagles on Sunday, Sept. 25, 2022 at FedExField in Landover, Md. (Shaban Athuman/Richmond Times-Dispatch via AP)

ASHBURN, Va. (AP) — Carson Wentz is not channeling his inner Chicken Little after the Washington Commanders fell to 1-2 on the season.

In the aftermath of 24-8 home loss to Philadelphia and with another key NFC East game at Dallas coming up Sunday, coach Ron Rivera echoed those sentiments — while adding he's not in the business of calling out players for the mistakes they know they're making.

“The guys that need to play better got to play better,” Rivera said Monday. “There’s some things that we have to fix, and that’s the truth of the matter. We have to play better. When we’re in opportunities and situations to make something happen, we’ve got to do those things. We’ve looked at it, we’ve figured it out, we’ve addressed it. Now we’ve got to go out and do it.”

One of those things is keeping Wentz upright; the Eagles sacked him nine times. Some of that could be blamed on protection breakdowns, though Rivera agreed after watching game film that Wentz made a few mistakes by holding onto the ball too long.

Wentz acknowledged that after a poor showing in his first chance to face the team that drafted him.

“It’s not the O-line,” Wentz said. “I’ve got to be better. I have to get rid of the ball in a lot of those situations, find a check down and move on — different things like that.”

Defensive tackles Daron Payne and Jonathan Allen continue to play well, and they succeeded in taking away a lot of opportunities for Eagles quarterback Jalen Hurts to run the ball.

Philadelphia had to adjust to that, and coach Nick Sirianni singled out that area of the game specifically.

“Credit them, that’s a really good defensive line,” Sirianni said. “I’ve got a lot of respect for Payne and Allen and (pass rusher Montez) Sweat. Those are good football players.”

Rivera sees progress in how those happened Sunday.

Second-year cornerback Benjamin St-Juste held his own when pressed into starting duty by William Jackson's back injury. St-Juste gave up some plays, but he also showed some potential for growth.

Jackson's status bears watching this week after the back injury crept up over the weekend and led to him getting scratched. Washington is also banged up along the defensive line, playing without Chase Young (ACL surgery recovery), Casey Toohill (concussion), Daniel Wise (ankle) and rookie Phidarian Mathis (knee)

Rookie running back Brian Robinson Jr., who is recovering from two gunshot wounds to his right leg, worked out on the field prior to the game Sunday. Robinson can be activated as soon as Week 5 when Washington hosts Tennessee, but that's no guarantee.

0 — Points the Commanders have scored in the first half over the past two games.

Avoiding a 1-3 start means winning at Dallas, a second consecutive opponent coming off a short week. FanDuel Sportsbook opened with the Cowboys as 3-point home favorites.