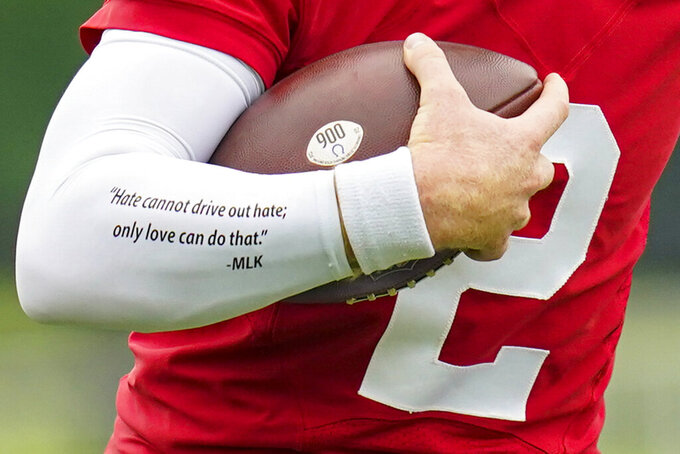 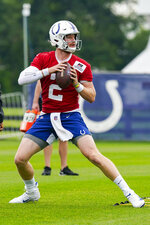 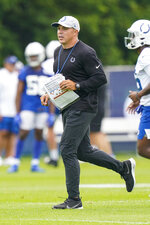 WESTFIELD, Ind. (AP) — As Carson Wentz jogged through the trees to the practice field Wednesday, the Indianapolis Colts' new quarterback took a look around.

The sprawling cornfields on the horizon made the former North Dakota State star feel right at home.

Less than 30 minutes later, Wentz settled in, started taking live snaps with teammates, and began the long, arduous process of getting acclimated to his new surroundings.

“I was telling coach (Marcus) Brady before coming out here, I'm a little amped up, I've got to tone it down," Wentz said, referring to the team's first-year offensive coordinator. “It feels kind of like the first day of school again. Coming out here, a beautiful setting for training camp, farmland all around you, this is my kind of place."

The Colts believe a fresh start may be just what Wentz needs to rebound from the worst season of his five-year career.

At 6-foot-5, 237 pounds, he is strong enough to break tackles and mobile enough to evade pass rushers. Add his strong arm to the mix and it's easy to understand Philadelphia why used the No. 2 overall draft pick on him in 2016.

Wentz initially lived up to the hype. He had the Eagles in title contention in 2017 and was considered a frontrunner for the NFL MVP award — until he suffered a season-ending torn anterior cruciate ligament in his left knee with three regular-season games left. Nick Foles, Wentz's replacement, led Philadelphia to its first Super Bowl crown.

But Wentz never quite replicated his success after the injury. And last season, he was sacked a league-high 50 times and threw a career-high 15 interceptions despite being benched for the final four weeks.

The tumult spilled into the offseason with media reports contending Wentz's “selfish" and “egotistical" personality didn't mesh in the Eagles locker room. Another report called the relationship between Wentz and then-coach Doug Pedersen irreparably damaged. Eventually the Eagles traded Wentz to Indy, where he has been reunited with Colts coach and former Eagles offensive coordinator Frank Reich.

Since Wentz joined the Colts, teammates and coaches have spoken glowingly about their fourth starting quarterback in four seasons.

“I think he's a great leader for us and I think he will take us that next step with his arms and his legs,” running back Nyheim Hines said.

After starting 1 for 5 in team drills Wednesday, Wentz delivered a solid performance that drew occasional cheers from the near-capacity crowd. Plus, the Colts are willing to be patient as Wentz gets in sync.

“Mentally he has it down," said Brady, who is calling plays with Reich sidelined under COVID-19 protocols. “We're going to continue to work on some adjustments. But overall, he has a good grasp of the the offense. He's just got to get his timing down with the receivers."

Indy has reached the playoffs two of the last three years — with different quarterbacks — and he'll be lining up behind one of the league's top offensive lines.

“I hear Braden Smith is pretty good around here and I just heard the news that we locked him up," Wentz said. “Fired up about that.”

Not everyone practiced Wednesday in Westfield, a northern suburb of Indianapolis.

Hines sat out with what Brady called a minor hip injury, and two-time All-Pro Darius Leonard jogged as part of his rehab from ankle surgery in June. Indy also announced cornerbacks T.J. Carrie and Xavier Rhodes and defensive end Al-Quadin Muhammad had been put on the reserve/COVID-19 list.

But Wentz was ready to go for the first of 19 training camp practices, and is already starting to feel back home in Indiana.

“I could feel it in the spring, right after the trade, the culture was different," he said. “It's a family, it truly feels like a family. It's always talked about in the locker room, ‘it's a family, it's a family.' But something feels different here and even in the community, even with you guys, it just feels like a big family with everyone supporting and encouraging each other. But the expectations are there, too."