Wilson can't spark Seahawks in his return from finger injury 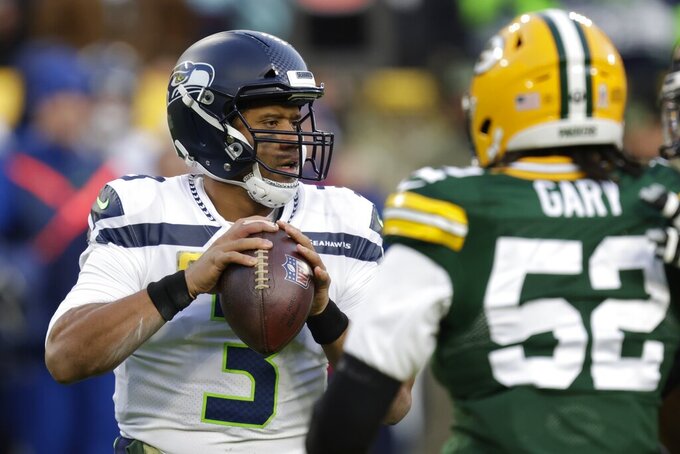 Seattle Seahawks' Russell Wilson looks to pass during the first half of an NFL football game against the Green Bay Packers Sunday, Nov. 14, 2021, in Green Bay, Wis. (AP Photo/Matt Ludtke)

GREEN BAY, Wis. (AP) — Russell Wilson did everything in his power to return as soon as possible from a finger injury that ended his remarkable run of endurance and reliability.

Yet the Wilson who returned from a three-game absence on Sunday hardly resembled the seven-time Pro Bowl selection who has led the Seattle Seahawks to eight playoff berths over the last nine seasons.

Wilson threw two interceptions in the end zone and never found a rhythm as the Seahawks fell 17-0 to the Green Bay Packers (8-2) for their first shutout loss since 2011, the year before his rookie season in Seattle.

“I felt confident in my hand,” Wilson said. “I felt confident with all the hard work. It was just a bad game in those two plays really. Those really were the defining moments of the game. When you’re playing good football teams, that’s usually what it is. They either go your way or they don’t. I didn’t play timid at all.”

Wilson’s struggles continued a frustrating season in which he ended his string of 149 consecutive regular-season games played to open his career. The streak ended when the right-handed Wilson hurt the middle finger in his throwing hand, an injury that required surgery.

The Seahawks (3-6) went 1-2 in the three games Wilson missed to fall down the standings in the tough NFC West. Wilson talked this week about how hard he worked to get back ahead of schedule, saying he rehabbed as much as 19 hours a day.

While acknowledging in the days leading up to the game that he wasn’t quite 100 percent, Wilson insisted he was close. His numbers indicated otherwise.

“I don’t know if his finger was a factor,” said Packers cornerback Kevin King, who had one of Wilson’s two interceptions. “I saw he sailed a few balls. He missed a few throws that he normally makes. But that’s just the kinks of it. Everybody’s out there dealing with something.”

Wilson went 20 of 40 for 161 yards and was intercepted twice in the end zone in the second half.

“He was ready to play,” Seahawks coach Pete Carroll said. “And there’s no other information leading into this that could tell us any different. He was pumped and got after it and all that. And they did a nice job tonight, they’re a good defense.”

The Seahawks trailed 3-0 in the third quarter and had a golden opportunity to at least tie the game until King picked off Wilson on a third-and-10 play from the 12.

Early in the fourth quarter, the Packers’ lead was up to 10-0 when Adrian Amos intercepted Wilson on a first-and-10 pass from the Green Bay 43.

“The reality was the game was 3-0 all the way until the fourth quarter or whatever and we should have won that game,” Wilson said. “Our defense played great. Guys battled throughout the whole game between two really good teams. I’ve got to play better and that was on me, those two plays. That was really the game.”

There was still plenty of blame to go around as the Seahawks started to lose their poise.

Wilson was unable to boost the Seahawks’ fading playoff hopes. The Seahawks’ remaining schedule includes two games with the Arizona Cardinals and one on the road with the Los Angeles Rams, among others.

Seahawks receiver DK Metcalf was ejected and offensive lineman Jamarco Jones received an unsportsmanlike conduct penalty following a skirmish with just over a minute left that also resulted in a taunting penalty for Green Bay safety Darnell Savage. Metcalf appeared to grab the face mask of at least one Packers player.

“Tired of losing,” Metcalf said as he explained the cause of the scuffle.

The Seahawks now have virtually no room for error as they fight for a playoff berth.