Winston, Saints look to build on momentum vs. Panthers 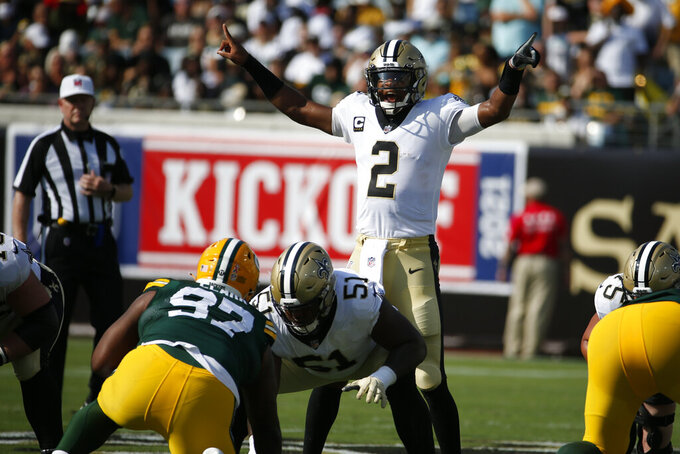 OPENING LINE: Saints by 3 1/2, according to FanDuel SportsBook

TURNOVER DIFFERENTIAL: Saints plus-3; Panthers: even.

SAINTS PLAYER TO WATCH: Saints RB Alvin Kamara has been strong against the Panthers during his career, racking up 340 yards rushing with six TDs while averaging 5.86 yards per carry in six starts. He also has 34 catches for 238 yards during that span.

PANTHERS PLAYER TO WATCH: LB Shaq Thompson is coming off a big performance in the season opener with 10 tackles, one sack, one interception and three passes defensed against the Jets. He's fast, he's strong and has a nose for the football. Thompson has become the leader of Carolina's defense.

KEY MATCHUP: Saints LDE Cam Jordan vs. Panthers RT Taylor Moton. Jordan is a player who gave the Panthers fits in the early years. But Moton has helped neutralize Jordan, helping hold him to one sack in the past six games against Carolina. That's one of the reasons the Panthers gave Moton a $72 million contract extension earlier this offseason. Don't be surprised if the Saints shift Jordan to the other side of the line for some pass rush plays.

KEY INJURIES: The Saints' win over the Packers did not come without a cost. DE Marcus Davenport strained a pectoral muscle and will not play, while CB Marshon Lattimore (thumb) and C Erik McCoy (calf) are also dealing with injuries that could potentially cost them some playing time. The Panthers will be without nickel back Myles Hartsfield for about 2 to 3 months with a wrist injury. Safety Juston Burris is expected to hold down that spot until A.J. Bouye returns in Week 3 from a two-game suspension.

SERIES NOTES: The Saints have won the past four meetings with Carolina and eight of the past nine, including a playoff game in the 2017 season. The only Carolina win during that span came in Week 17 of the 2018 season — after the Saints had already clinched the division title and were resting some of their starters. ... New Orleans was unbeaten in six games against NFC South opponents last season. ... The Saints are 14-12 at Carolina. ... New Orleans has not lost in Carolina since 2016. ... Only one game in the series has ever gone to overtime, with the Saints winning 23-20 in 2003.

STATS AND STUFF: QB Jameis Winston had five TD passes with no interceptions for a 130.8 rating in Week 1. That was Winston’s second career game with five TD passes, tying a career high. ... Winston passed for 400 yards in his previous start vs. Carolina on Oct. 13, 2019, with Tampa Bay. ... RB Alvin Kamara had 91 scrimmage yards (83 rushing, 8 receiving) and a TD receiving last week. Kamara has 16 TD catches since 2017, tied for most among running backs during that timeframe. ... TE Juwan Johnson had his first two career TD catches in Week 1 in what was his first game since being converted from wide receiver to his new position. ... S Marcus Williams had his 14th career interception last week. ... Saints receiver Chris Hogan, who had a TD catch last week, played for Carolina in 2019. ... Panthers QB Sam Darnold made his Carolina debut last Sunday and threw for 279 yards with and one touchdown in a 19-14 win against his former team, the New York Jets in Week 1. ... Panthers RB Christian McCaffrey had 187 yards from scrimmage on 30 touches vs. the Jets. ... Carolina’s defense had six sacks by six different players against the Jets.

FANTASY TIP: Panthers WR D.J. Moore has had at least 80 yards receiving in each of his past five games against the Saints.