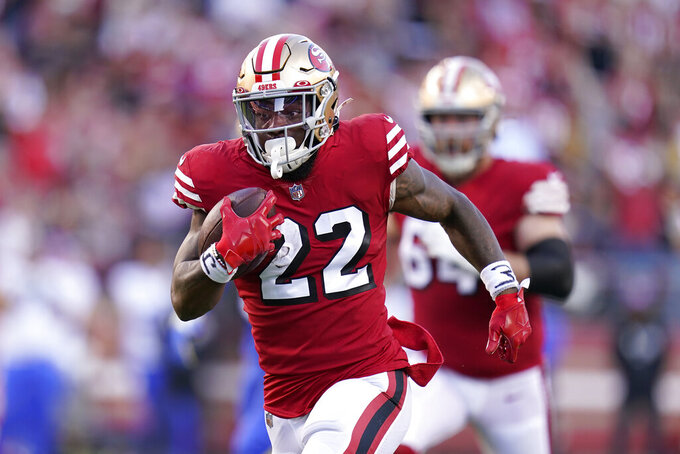 San Francisco 49ers running back Jeff Wilson Jr. (22) runs for a touchdown against the Los Angeles Rams during the first half of an NFL football game in Santa Clara, Calif., Monday, Oct. 3, 2022. (AP Photo/Godofredo A. Vásquez) 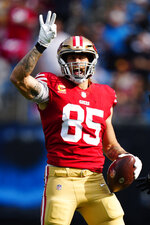 BETTING LINE: 49ers by 4½, according to FanDuel SportsBook.

TURNOVER DIFFERENTIAL: 49ers plus-1; Falcons minus-1

49ERS PLAYER TO WATCH: RB Tevin Coleman had a TD catch and TD run last week in his first action of the season for the 49ers for his sixth career game with at least two touchdowns. The former Falcons back had 3,350 yards from scrimmage and 29 TDs for Atlanta from 2015-18.

FALCONS PLAYER TO WATCH: QB Marcus Mariota led Atlanta with 61 yards rushing last week but he threw for only 147 yards. He has been held to fewer than 200 passing yards in three of five games. Mariota has four TD passes and four interceptions while rookie Desmond Ridder has yet to make his debut.

KEY MATCHUP: 49ers RB Jeff Wilson Jr. vs. Falcons LBs Rashaan Evans and Mykal Walker. Wilson had 132 yards from scrimmage last week and is averaging 88.3 yards rushing since becoming the lead back when Elijah Mitchell got hurt in the opener. Evans and Walker have been strong points of Atlanta's defense, clearing the path for Deion Jones' trade to Cleveland.

STATS AND STUFF: The Niners spent the week practicing in West Virginia after playing at Carolina last week. San Francisco is 4-0 in the second game of two-game trips the past three seasons. ... The 49ers have at least one sack in 32 straight games for the longest active streak in the NFL. They have had at least six sacks in back-to-back weeks for the first time since 1985 and their league-leading 21 sacks on the season are their most by the franchise through five games since the team had 22 in 1998. ... San Francisco has allowed a league-low 4.01 yards per play, the fewest through five games since 2008. ... The 49ers had three TD drives of at least 75 yards last week after having only four in the first four games. ... The Niners have a league-low four three-and-outs on offense and have forced a league-high 21 three-and-outs on defense. ... San Francisco QB Jimmy Garoppolo has been on the winning side in 35 of 50 starts, one of seven QBs with at least 50 starts to win at least 70% of them. ... Garoppolo converted seven third downs with passes last week, tied for the second most third down conversion passes by a Niners QB in the past 20 seasons. ... San Francisco CB Charvarius Ward had a career-high four passes defensed last week. ... The Falcons have only eight sacks, including four in their opening game against New Orleans. ... The Falcons were held without a sack in last week's loss to Tampa Bay after Grady Jarrett's would-be sack of Tom Brady was ruled roughing the passer. ... The Falcons were last in the league with 18 sacks in 2021. No other team had fewer than 29. ... Atlanta has rushed for at least 150 yards in four of its first five games for the first time since 1986. That includes 151 yards against Tampa Bay in team's first game since placing leading rusher Cordarrelle Patterson on IR following knee surgery. ... Rookie RB Tyler Allgeier had 13 carries for 45 yards as the starter. ... The Falcons have played five consecutive one-score games.

FANTASY TIP: 49ers TE George Kittle has 19 receptions for 227 yards in two games against the Falcons. He had five catches last week and could take advantage of a pass defense focused on containing WR Deebo Samuel.