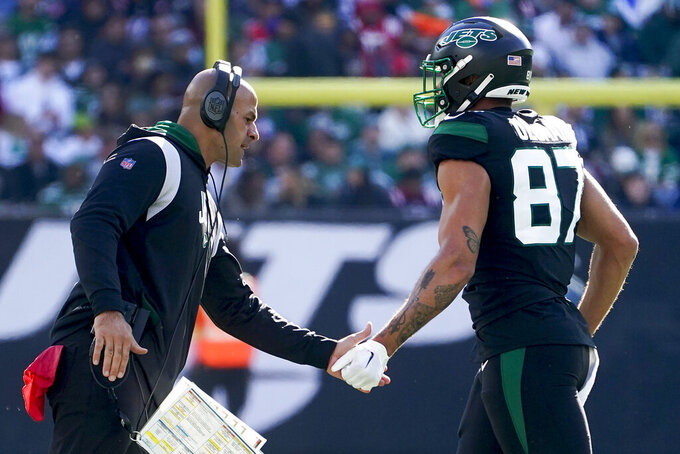 EAST RUTHERFORD, N.J. (AP) — The Buffalo Bills are in noteworthy territory for the franchise — and they acknowledge they're still a long way from where they want to finish.

The AFC-leading Bills are 6-1 for the eighth time in team history. And it's the first time since 1993, when the Jim Kelly-led team ended up going to its fourth straight Super Bowl.

A victory Sunday against the division rival New York Jets (5-3) would mark just the seventh time the Bills have won at least seven of their first eight games, which they also did in 1993.

McDermott's team is 0-1 against the AFC East, having lost at Miami in Week 3. The Bills know better than to overlook a surprising Jets team that had a four-game winning streak snapped last Sunday against New England.

That's an unsettling thought, considering how well the Bills have played lately.

Buffalo is powered by the Allen-led offense that ranks first overall in the NFL and a defense that is third overall and has allowed 98 points in seven games — the fewest in the league.

The Bills have a chance to become the third team in history to average at least 425 yards of offense per game and allow fewer than 300 yards per game on defense through its first eight games, joining the 2010 Chargers and 2007 Patriots.

While Buffalo has won each of the last four meetings, Sunday marks the first since Week 9 of the 2011 season in which the Bills and Jets both have winning records.

“We have all the respect in the world for them,” McDermott said of the Jets, “and it’s clear that they’re a really good football team.”

Wilson had gone three straight games without being picked off while New York relied heavily on the rushing attack. With rookie running back Breece Hall out for the season with a torn ACL, the Jets went back to the passing game — maybe too much. Wilson threw 41 times after not topping 26 passes in any of the previous three games. He had a career-high 355 yards, but the mistakes overshadowed any statistical superlatives.

“He has to play better,” Saleh said, “and we have to find ways to help him.”

Cornerback Tre’Davious White and the Bills’ brass were being cautious when it comes to when the starter will make his season debut. The sixth-year player was activated Tuesday after missing more than 11 months since tearing a ligament in his left knee. He wasn’t on the injury report Friday, but McDermott wouldn’t commit to White playing Sunday.

“I think that when I get back out, it’s going to be the right time and my leg will be right once I get back out there,” White said earlier in the week. “So I have confidence.”

The Jets' cornerback duo of rookie Ahmad “Sauce” Gardner and veteran D.J. Reed has been a strength this season, with the two regularly frustrating opposing receivers.

Gardner and Reed face a major test Sunday in Stefon Diggs, who's off to another terrific start. Diggs has 55 catches for 764 yards — both among the NFL's leaders — and he's tied with Kansas City's Travis Kelce for the league lead with seven touchdown catches.

As first impressions go, running back Nyheim Hines liked what he saw during his first practice in Buffalo after being acquired in a trade with Indianapolis.

“Practice is crazy,” Hines said. “It’s a high-powered offense and I just want to help this offense become more high-powered.”

The Bills also addressed their banged-up secondary at the trade deadline Tuesday by acquiring safety Dean Marlowe from Atlanta. Marlowe played for Buffalo from 2018-20. He provides a veteran presence to a group missing starter Micah Hyde (season-ending neck injury) and with Jordan Poyer’s status uncertain because of an elbow injury.