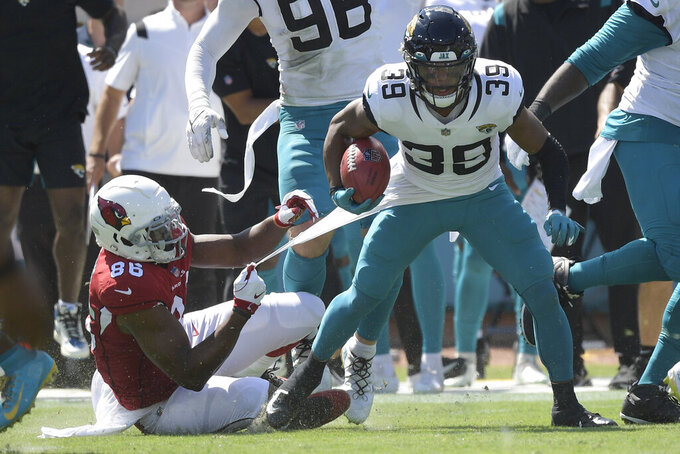 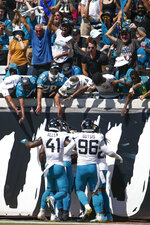 Now everyone sees why.

Agnew returned a missed field goal 109 yards for a touchdown in Jacksonville’s 31-19 loss to Arizona on Sunday, the NFL’s first “Kick-6” since 2007. It was Agnew’s second kick return for a score in as many weeks. He returned one 102 yards in a loss to Denver last week.

His latest one tied an NFL record, albeit in a losing effort.

Cromartie returned a missed field goal the distance at Minnesota on Nov. 4, 2007. Patterson matched the longest play in NFL history by returning the opening kickoff for a touchdown against Green Bay on Oct. 27, 2013.

He said he knew scoring was a possibility when Matt Prater's 68-yard attempt fell short. Agnew caught the ball and started left. He weaved his way through traffic near the sideline. He broke one tackle — tight end Demetrius Harris had his shirttail at one point — and outran several others behind a wall of blockers.

“It’s all offensive linemen and probably a couple tight ends and then the kicker,” said Agnew, who is the first player in NFL history with 100-yard touchdowns in consecutive games or weeks, according to the Elias Sports Bureau. “It’s all big dudes out there. I just can’t get tackled by the kicker. That’s my thought process.”

Cardinals coach Kliff Kingsbury deserves an assist for giving Agnew a chance to make history. Kingsbury sent Prater onto the field to attempt what would have been an NFL-record field goal at the end of the half.

“He has plenty of leg,” Kingsbury said. “Unfortunately it didn’t work out this time. But we trust Matt and are going to give him opportunities.”

Agnew and Prater played together in Detroit, so Agnew knew he was capable of making that kick. Still, the call surprised the Jaguars because it was into the wind.

“I couldn’t believe they were going to kick it,” said Meyer, in his first season as Jacksonville's coach. “We practiced that. We worked it, and that kid is a dynamic guy with the ball in his hand, Agnew. Same thing we saw. That’s why we went after him in free agency.

“That’s a game changer, and he’s an even better guy than he is a player. We’ve got to find ways to get him loose on a punt return. We haven’t done that yet.”

The kickoff return was one of few highlights for the Jaguars, who lost their 18th consecutive game to move eight shy of tying the NFL record set by Tampa Bay in 1977.

The Jags had everything going their way for a good chunk of the game. They opened the second half with an interception and built a 19-10 lead.

But it was all Arizona from there, and the Jaguars were left to think about how close they were to ending a yearlong skid.

Rookie quarterback Trevor Lawrence had four turnovers, including two interceptions and two fumbles. His second INT came after a botched flea flicker and was returned 29 yards for a touchdown late in the third quarter.

Nothing about the play looked smooth: The handoff to Carlos Hyde and pitch back seemed clunky. Left guard Andrew Norwell did a spin for some reason and whiffed on three-time NFL defensive player of the year J.J. Watt, who pressured Lawrence and forced him to throw off his back foot into the flat.

Byron Murphy pounced and went untouched the other way.

“It’s going to be a hard one to get out of my mind,” Meyer said.

Plenty else went wrong for Jacksonville:

—Jacob Hollister bobbled a pass from Lawrence that Murphy caught for another pick in the first half.

—Jacksonville’s defense, which gave up just 155 yards in the first half and held the Cards to 0 for 4 on third down, surrendered 252 in the second half and allowed two fourth-down conversions.

—Lawrence fumbled when running back James Robinson ran into his hand while trying to block.

“We didn’t finish the game. We’re close. We’re getting there.”