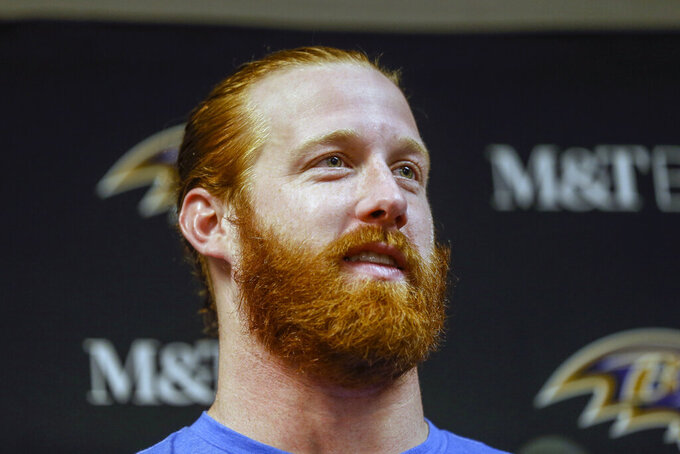 FILE - In this Dec. 8, 2019, file photo, Baltimore Ravens tight end Hayden Hurst talks with reporters following an NFL football game in Orchard Park, N.Y. The Atlanta Falcons are expected to announce a trade with Baltimore for tight end Hayden Hurst. The Falcons, who are cutting running back Devonta Freeman and cornerback Desmond Trufant, among others, in cost-cutting moves, are hoping Hurst will replace Austin Hooper, who signed with Cleveland as a free agent. (AP Photo/John Munson, File)

ATLANTA (AP) — The Atlanta Falcons and Dante Fowler have agreed to a $48 million, three-year contract, reuniting the outside linebacker with one of his coaches in college.

A person familiar with the deal told The Associated Press about the move on Wednesday on condition of anonymity because most teams won’t announce signings until the players pass physicals. The league isn't allowing players to report to new teams immediately for those physicals during the coronavirus pandemic.

The 25-year-old Fowler played college ball at the University of Florida. When he was a freshman in 2012, Falcons coach Dan Quinn was the Gators' defensive coordinator.

Fowler celebrated the new deal on his Twitter account when he referred to the Falcons' slogan by writing “#Rise Up!! Let's go baby!!”

Fowler will be expected to replace Vic Beasley Jr. as the team's top pass-rusher. Beasley agreed to a one-year deal with the Tennessee Titans.

The search for pass-rush help is an offseason priority for Atlanta, coming off its second straight 7-9 finish. The Falcons ranked near the bottom of the league last season with 28 sacks, ahead of only Miami's 23.

The Falcons lost their starting tight end, two-time Pro Bowler Austin Hooper, who agreed to a deal with the Cleveland Browns. Atlanta acquired tight end Hayden Hurst from the Baltimore Ravens on Monday. The Falcons added Hurst and a 2020 fourth-round pick from the Ravens in exchange for second- and fifth-round picks in this year's draft.

The Falcons made the move with Trufant, a 2013 first-round pick, official with a post-June 1 designation on Wednesday, Trufant had 13 interceptions in seven seasons with Atlanta.

“Desmond has been an integral part of our team’s success over the last seven years," general manager Thomas Dimitroff said in a statement released by the team. “We owe him a great deal of gratitude for the talent he’s provided and the heart and soul he’s poured into our organization, on and off the field.”