For Bears, business figures to pick up in 2nd round of draft 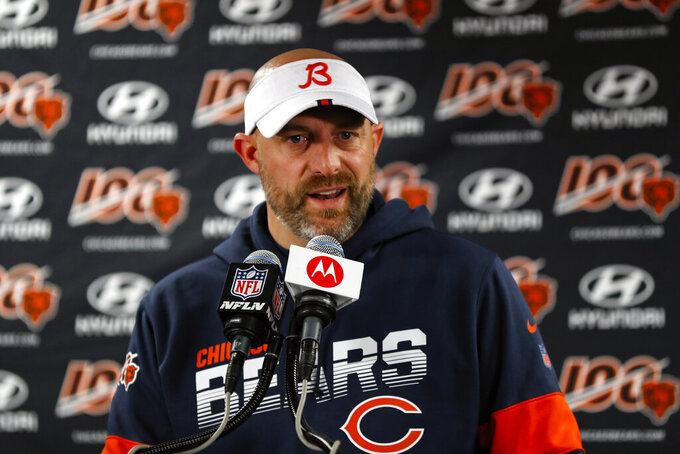 Bears general manager Ryan Pace said it’s up to management, scouts and coaches to “maximize the draft picks we have” and “capitalize” on the opportunities to cross more items off Chicago’s to-do list.

The work will have to wait a bit longer: The first night of the NFL was an uneventful one for the Bears, with no first-round picks for the second year in a row. They dealt them to Oakland in a blockbuster trade for star pass rusher Khalil Mack prior to the 2018 season.

Business will pick up on Friday. The Bears have a pair of second-round selections at Nos. 43 and 50 overall and seven picks in all through Saturday.

Clearly, the Bears still have work to do after going 8-8. They began last season with Super Bowl hopes only to miss the playoffs for the eighth time in nine years, a major letdown after winning the NFC North at 12-4 in 2018.

The Bears need more playmakers to complement receiver Allen Robinson and boost an offense that ranked among the league's worst. They also need better blocking to protect quarterbacks Mitchell Trubisky and Nick Foles after Chicago gave up 45 sacks and ranked near the bottom of the NFL at at 3.7 yards per rushing attempt.

Even the defense — one of the NFL's best the past few years — has holes. The Bears could use a cornerback and safety to complement Kyle Fuller and Eddie Jackson with Prince Amukamara and Ha Ha Clinton-Dix both gone.

If Pace decides to address the offense with his first two picks, Notre Dame tight end Cole Kmet would be a good fit at No. 43 to go with offseason pickups Jimmy Graham and Demetrius Harris. If they then go with a receiver at 50, Penn State’s KJ Hamler might be a possibility.

But if the Bears opt for secondary help with their early picks, the options might include cornerbacks Jaylon Johnson of Utah and Trevon Diggs of Alabama.

So far, it's been a busy offseason for Pace.

The Bears brought in Robert Quinn to take pressure off Mack on the edge, signing the former All-Pro pass rusher to a five-year, $70 million contract. They also signed Graham, hoping the veteran can show some of the form that made him a five-time Pro Bowl pick for New Orleans and Seattle after being released by Green Bay. Pace had a hand in drafting him working in the Saints' front office, and the Bears got little production from their tight ends.

But the most notable move was the trade with Jacksonville for Foles. That created a competition with Trubisky, who struggled in his third season after being drafted with the No. 2 pick in 2017.

The Bears have just two picks in the first 162 and none in the third or fourth rounds Saturday. Unless they make a trade, they won’t go again until their turn comes up in the fifth at No. 163 overall. They also have two selections each in the sixth (196, 200) and seventh (226, 233).

By Teresa M. Walker 43 minutes ago
By John Marshall an hour ago
By Greg Beacham 2 hrs ago
By Tom Withers 2 hrs ago
By Rob Maaddi 3 hrs ago