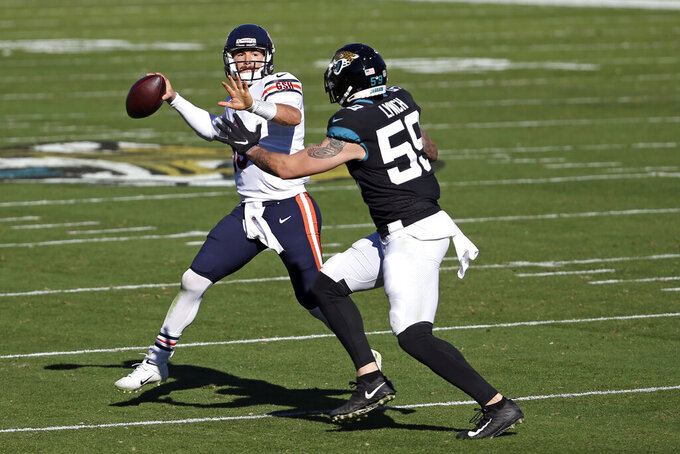 Chicago Bears quarterback Mitchell Trubisky, left, looks for a receiver as Jacksonville Jaguars defensive end Aaron Lynch (59) tries to stop him during the first half of an NFL football game, Sunday, Dec. 27, 2020, in Jacksonville, Fla. (AP Photo/Stephen B. Morton) 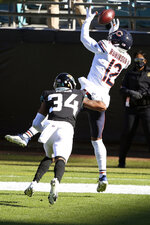 The Chicago Bears head into the final week with their eyes on Aaron Rodgers and the Green Bay Packers and their chances to grab a playoff spot still alive.

The Arizona Cardinals put the opportunity in Chicago's hands by losing to San Francisco on Saturday. The Bears followed up with a 41-17 romp at Jacksonville on Sunday.

“Our players and our coaches have battled," coach Matt Nagy said Monday. "We’ve all now together put ourselves in the position where you win a football game, last game of the year, and you’re guaranteed to be in the playoffs if you win. That part’s exciting.”

A win over the Packers would send the Bears (8-7) to the playoffs for the second time in Nagy's three seasons. They can still get in with a loss if the Cardinals drop their road game against the Los Angeles Rams. And if both games end in ties, Chicago would be in the playoffs.

No matter which scenario plays out, the Bears are in a spot that was hard to envision a few weeks ago. They got blown out by the Packers at Lambeau Field on Nov. 29, two fourth-quarter touchdowns by Chicago making a 41-25 rout look a little closer than it really was.

If that wasn't the Bears' low point, a 34-30 loss to Detroit at home the following week was. They blew a 10-point lead in the closing minutes, a strip sack of Mitchell Trubisky deep in Chicago territory setting up the winning touchdown. That gave the Bears six straight losses — their worst skid since dropping eight in a row in 2002 — and fueled more speculation about the futures of Nagy and general manager Ryan Pace.

They have won three in a row since, beating Houston, Minnesota and Jacksonville. Those teams are a combined 11-34.

The Packers (12-3), with a shot at the No. 1 seed in the NFC, pose a different challenge. They have won 18 of the past 21 against Chicago, including the playoffs. Green Bay, which trounced Tennessee on Sunday, would get the top seed with a win over the Bears or a tie. A loss or tie by Seattle against San Francisco in a game played in Glendale, Arizona, would also do it.

Win or lose, one thing is certain for the Bears. They'll finish .500 or better for the third time in as many seasons under Nagy.

WR Allen Robinson. Robinson matched a career high with 10 catches for 103 yards against his former team, giving him 100 receptions for the first time in his career.

Trubisky. Though he has played better overall in the five games since his benching in Week 3, Trubisky still is making the sort of mistakes that prompted Nagy to turn to Nick Foles.

He threw an inexplicable interception in the end zone near the end of the first half, on first down at the Jacksonville 13 with 35 seconds remaining. Rather than throw the ball away, a scrambling Trubisky tried to jam it to Robinson in a crowd in the end zone. And the result was an interception for Joe Schobert.

Kicker Cairo Santos. The eight-year veteran has made 24 consecutive field goals, tying Robbie Gould's single-season club record set in 2006. Santos is 27 for 29 this season, after connecting from 20 and 40 yards on Sunday.

No one's stock took a major hit, though it is hard to imagine the Bears handing off to tight end Cole Kmet again anytime soon. They did just that on first down at the Jacksonville 1 early in the second quarter, and he got tackled for a 3-yard loss, leading to a field goal.

Nagy said the Bears will “keep our fingers crossed” that cornerbacks Jaylon Johnson (shoulder) and Buster Skrine (concussion) are available against Green Bay. Johnson has missed the past two games, while Skrine has sat out three in a row.

30 — The Bears have scored 30 or more points in four straight games for the first time since 1965. They haven't done it in five or more since 1956, when they did it in seven consecutive games.

The Bears figure to have their hands full with the Packers trying to lock up the top seed and the bye that comes with it. Rodgers is 19-5 against Chicago.