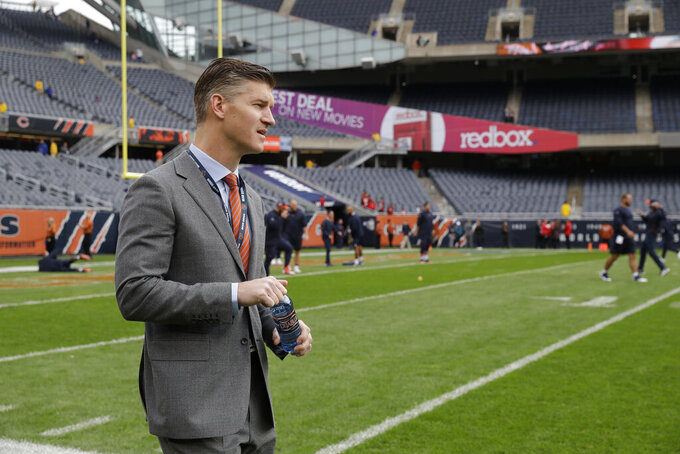 FILE - In this Sept. 30, 2018, file photo, Chicago Bears general manager Ryan Pace stands on the field before the team's NFL football game against the Tampa Bay Buccaneers in Chicago. The Bears have no first-round pick for the second year in a row, having traded them to Oakland for Mack prior to the 2018 season. They have two second-rounders at 43 and 50 overall and seven picks total. “It’s a strong draft. With us having two No. 2s that’s impactful for us," Pace said. (AP Photo/Nam Y. Huh, File)

The Chicago Bears brought in competition for quarterback Mitchell Trubisky by trading for Nick Foles. They added a former All-Pro pass rusher to help Khalil Mack when they signed Robert Quinn.

But if they're going to bounce back from a disappointing season, they still have work to do. The next task for them is the draft.

The Bears need more playmakers to complement receiver Allen Robinson and boost an offense that ranked among the NFL's worst last season. They need better blocking to protect the quarterback and create holes for the running backs. And even on defense, an area where they've excelled in recent years, there are holes in the secondary.

The Bears went 8-8 last season and missed the playoffs for the eighth time in nine years. That certainly wasn't what they envisioned after winning the NFC North at 12-4 in coach Matt Nagy's first season in 2018.

They come into the draft with no first-round pick for the second year in a row, having traded them to Oakland for Mack prior to the 2018 season. They have two second-rounders at 43 and 50 overall and seven picks total.

“It’s a strong draft. With us having two No. 2s that’s impactful for us," general manager Ryan Pace said.

Here are some things to know as Chicago continues to try to regroup:

If the Bears are looking for their quarterback of the future in this draft, ESPN analyst Mel Kiper Jr. has some advice.

“Help the quarterbacks you have,” he said.

The Bears have a fifth-year option on Trubisky for 2021 and a deadline in May to exercise it. Foles, who lost his starting job in an injury-filled year in Jacksonville, is under contract through 2022 but can opt out each of the next two seasons if he hits certain incentive markers, according to spotrac.com.

The Bears might draft a quarterback at some point. But the way Kiper sees it, adding a receiver and tight end is the way to go in the second round.

He thinks Notre Dame tight end Cole Kmet would be a good fit at No. 43 to go with offseason pickups Jimmy Graham and Demetrius Harris and boost a position where the Bears got little production. Kiper isn't sure how much Graham, the former New Orleans and Seattle star, has left at age 33 after getting released by Green Bay last month. Kmet grew up about 45 miles northwest of Soldier Field in Lake Barrington, Illinois.

Besides not having a first-rounder, the Bears also have none in the third or fourth. Pace has a history of moving around in the draft, most notably trading up a spot to draft Trubisky at No. 2 overall in 2017, so don't be surprised if that changes.

When it comes to first-round picks, Pace has a spotty record. So maybe having to wait isn't the worst thing for Chicago.

While linebacker Roquan Smith has become a key part of the defense since the Bears took him at No. 8 in 2018, two of Pace's four first-rounders since he became GM in 2015 are no longer with the team.

Receiver Kevin White battled injuries and lasted just four years in Chicago after being drafted seventh overall in 2015. Linebacker Leonard Floyd played well in some areas but never developed into the pass rusher the Bears hoped he would become when they took him at No. 9 in 2016. He was released last month, and Trubisky's future in Chicago is in question.

Though they boast a top-tier defense, the Bears could use help in the secondary.

They need a cornerback and safety to complement stars Kyle Fuller and Eddie Jackson. And if they decide to go that route with one of their earlier picks, their options could include cornerbacks A.J. Terrell of Clemson, Jaylon Johnson of Utah and Trevon Diggs of Alabama.

The Bears might want to beef up their blocking. After all, they gave up 45 sacks last season and ranked among the league's worst at 3.7 yards per rushing attempt.