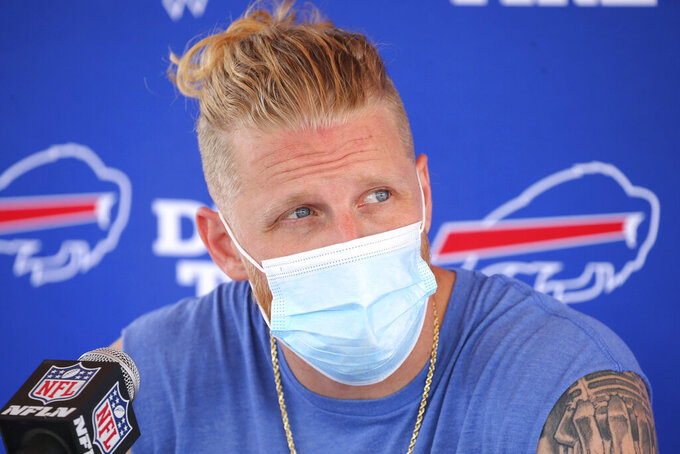 ORCHARD PARK, N.Y. (AP) — Wide receiver Cole Beasley continued his crusade against vaccinations and the NFL’s COVID-19 policies as the Buffalo Bills opened training camp, though he attempted to sidestep questions about his stance.

Beasley opened his news conference Wednesday by reading from a prepared statement for 2 minutes, 30 seconds, then asked reporters to stick to football questions. Shortly afterward he released a new rap song in which he says there “ain’t a vaccination” for him.

The song called into question the sincerity of Beasley’s statement, adding more fuel to the fire in what’s been a tumultuous few months for Beasley and the Bills regarding COVID-19 vaccines.

“I’m not anti- or pro-vax. I’m pro choice,” Beasley said in his statement. “With that being said, the issue at hand is information being withheld from players in order for a player to be swayed in a direction he may not be comfortable with. When dealing with a player’s health and safety, there should be complete transparency regarding information that is vital in the decision-making process.”

In his statement, Beasley repeatedly referred to a lack of transparency and information -- while the Bills have said that they have done everything they can to educate their players about vaccinations. Coach Sean McDermott has spoken at length about his desire to see his players vaccinated.

General manager Brandon Beane said that just over 80% of Bills players have received at least one vaccine dose.

“We’ve had an uptick of guys that have at least got one shot. So we’ll continue to educate,” Beane said. “At the end of the day, we’re not going to force it on any of our players or any of our staff. That’s a personal decision. And that’s how the organization will handle it going forward.”

The NFL Players Association has supported league COVID-19 protocols. Meanwhile, vaccinations have been a hot-button topic for the Bills, with players changing messages and speaking out publicly on social media as developments happen.

Earlier this offseason, Beasley threatened to retire after the NFL and NFLPA announced new rules for vaccinated and unvaccinated players. Recently Beasley and defensive end Jerry Hughes had an exchange on Twitter about their differing vaccine views, which came after players repeatedly voiced their preference to keep things “in house” when faced with vaccine questions during news conferences.

Beasley and quarterback Josh Allen downplayed the exchange with Hughes, saying it was a typical locker-room discussion between teammates.

“I think it was a little blown out of proportion,” Allen said. “Jerry and Cole, they spend so much time around each other ... honestly you can’t really take emotions from tweets or texts on a screen. I think it was more of a friendly conversation and people kind of took it and ran with it.”

“Me and Jerry are brothers,” Beasley said. “We had a conversation on the phone immediately after, we talked it through, and we weren’t mad at each other, we’re just talking to each other. A lot of things can be taken out of context and in the wrong way in social media because people are going to do what they do with it. Jerry’s one of the guys that I’ll run through a wall for.”

Beasley has been a key member of a Bills offense that soared to new heights in 2020, making it to the AFC championship game. He’s considered one of the best slot receivers in the league and is coming off a year with career highs in receptions (82) and yards (967).

Allen, who finished second in MVP voting last year to Aaron Rodgers, said he does not believe the issue will divide the team or affect the players on the field.

“Guys have different opinions, they have different thoughts, ideas,” Allen said. “Again, everyone’s entitled to that. If guys want to get it, great. If guys don’t want to get it, great. Nobody looks at the guys who aren’t getting it as a distraction or not wanting to help this team win. Everybody’s in the same boat here. We’re all going with one heartbeat, and that’s helping the Buffalo Bills win football games and ultimately try to win a championship.”

“At the end of the day we’re professionals. We’re going to do what our job entails and follow the rules and guidelines on both sides.”

NOTES: Two Bills players, left tackle Dion Dawkins and guard Ike Boettger, missed the start of camp after testing positive for the coronavirus. ... Hughes opened camp on the non-football injury list after suffering a calf strain in training. He’s not expected to miss much time.