Bills content to sit out 1st round with addition of Diggs 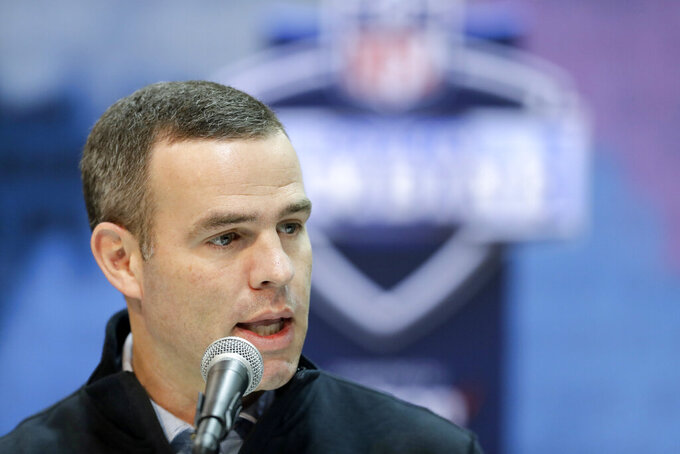 FILE - In this Feb. 28, 2019, file photo, Buffalo Bills general manager Brandon Beane speaks during a press conference at the NFL football scouting combine in Indianapolis. Beane made a bold move in the offseason by giving up four draft picks _ including the 22nd overall _ to acquire Stefon Diggs in a trade with the Minnesota Vikings. The Bills are left with seven picks over the final six rounds, starting with No. 54. (AP Photo/Darron Cummings, File)

BUFFALO, N.Y. (AP) — Brandon Beane is OK with sitting out the first round of the NFL draft.

Should the Bills general manager gets bored Thursday night, Beane’s certain he can find something entertaining to occupy his time.

“I’m going to play some videos of Stefon Diggs when 22 comes up,” he said during a conference call this month. “That’s our first-round pick.”

Beane referred to the bold move he made to address Buffalo’s most pressing offseason need by giving up four draft picks — including the 22nd overall — to acquire Diggs from the Minnesota Vikings on March 12.

The trade marked a drastic departure in approach for Beane, who spent much of his first three years shedding high-priced talent to stockpile draft picks. Adding Diggs is a sign of Beane going all-in on a team he believes is a contender following Buffalo’s first 10-win season in 20 years, and second playoff berth in three years.

By targeting an established player in Diggs, who is entering his sixth NFL season, Beane also took into account how little time a prospect might have to develop should the new coronavirus pandemic severely cut into the number of offseason practices.

“A lot of stuff in college is all signaled in. A lot of these guys aren’t in huddles,” he said, before referring to Diggs. “I know this guy knows ball, will be able to understand the verbiage once he learns our system quicker than (a draft pick).”

The Bills are left with seven picks over the final six rounds, starting with No. 54.

With Beane replenishing other roster holes – many of them on defense — with veteran free agents, he has the flexibility of targeting the best player available as opposed to drafting for an immediate need.

Beane’s choices could vary from Florida pass rusher Jabari Zuniga, Texas Tech linebacker Jordyn Brooks or doubling up on Diggs, who’s younger brother Trevon played cornerback at Alabama. Adding a running back to develop behind starter Devin Singletary is another option, with LSU’s Clyde Edwards-Helaire among those expected to be available in the second round.

It’s not a coincidence how many of the Bills' offseason free-agent additions have ties to Beane and coach Sean McDermott, who worked together in Carolina before arriving in Buffalo in 2017. Beane served in the front office while McDermott was the team’s defensive coordinator.

Beane targeted those players because their familiarity with McDermott’s defense will ease their transition.

Brown led Buffalo with 72 catches for 1,060 yards, while Beasley finished second with 67 catches for 778 yards. The Bills still finished 26th among NFL teams with 3,476 yards passing, something Beane sought to improve. Diggs topped 1,000 yards receiving in each of his past two seasons.

“I think it’s a huge, huge boost for our offense and for our team,” said Allen, preparing to enter his third season. “To have a weapon like that, it makes me super happy. It should make our other guys super happy, too, just because the attention (from opposing defenses) is going to have to be elsewhere.”

Allen acknowledged his numbers need to improve, while adding it helps entering his third season in the same system.

“I’ve had a few long talks with guys who have played the position for a long time, and they say, Year 3 is when things start to happen,” Allen said. “We need to see results. I understand how big of a year it is.”

“People aren’t going to like this answer, but I enjoyed playing against Tom,” said Allen, who grew up being a fan of Brady. “But I think Bills Mafia is happy that he’s out of there. They were tired of him winning in Buffalo, and frankly, we were tired of it, too.”