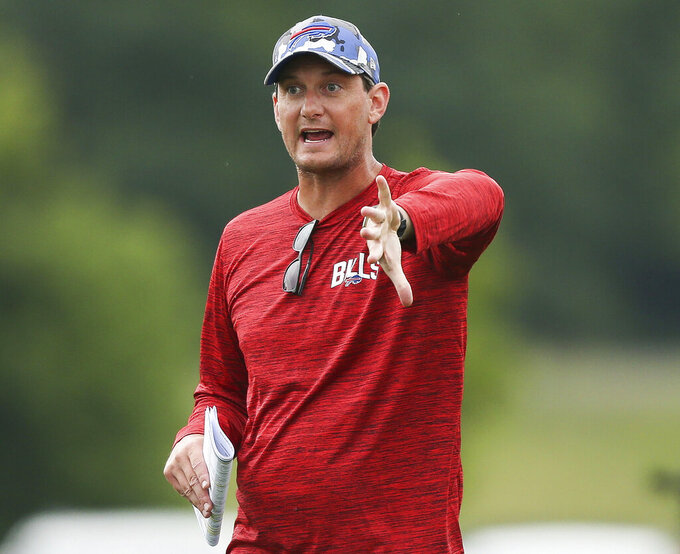 FILE - Buffalo Bills offensive coordinator Ken Dorsey speaks to the wide receivers during practice at the NFL football team's training camp in Pittsford, N.Y., Aug. 4, 2022. Dorsey can appreciate a need to rein back his emotions after a video clip showed him in the visitors’ coaches booth ripping off his headset and violently bouncing it off the table, before trashing his game notes in the immediate aftermath of a 21-19 loss to the Miami Dolphins on Sunday, Sept. 25, 2022. (AP Photo/Joshua Bessex, File)

ORCHARD PARK, N.Y. (AP) — Bills offensive coordinator Ken Dorsey is not going to apologize for the passion he has for football and for his players battling in the 90-plus degree South Florida heat.

On the other hand, Dorsey can appreciate a need to contain his emotions after a video clip showed him in the visitors’ coaches booth ripping off his headset and violently bouncing it off the table before trashing his game notes in the immediate aftermath of a 21-19 loss to the Miami Dolphins on Sunday.

“We’re human, and that’s what happens,” Dorsey said during a Zoom call on Monday. “I don’t ever want to take the passion out of the game. And we’re in this to win football games for the Bills, for our fans. But it’s something I’m going to learn from and make sure to correct going forward.”

Though the sound was off, a CBS camera positioned in the booth captured Dorsey’s volatile eruption in a 7-second clip that ended when someone placed their hand over the lens.

The video became a social media sensation, with most Bills fans lauding the 41-year-old for showing his frustration, while some questioned whether it was an unprofessional look for the first-time coordinator and former quarterback.

“I think that says a lot about him as a coach and how hard he works at it, and how important it is to him,” McDermott said. “But that said, it’s important that we as leaders keep our poise and we model that to our players.”

Dorsey’s frustration stemmed from a game in which the injury-thinned Bills squandered several scoring opportunities, including running out of time to attempt a potential game-winning field goal.

Buffalo thoroughly outplayed its division rival by outgaining Miami 497-212, and finishing with more than a 20-minute edge in time of possession.

Dorsey isn't the first NFL coach to show his emotions after a tough loss.

New England coach Bill Belichick has smashed tablets in frustration on the sideline. Former New York Giants coach and Jaguars vice president Tom Coughlin yelled expletives and banged his table in the visiting executive booth next to the press box during a Jacksonville loss at Buffalo in 2018.

Dorsey’s eruption wasn’t considered unusual, except for it being captured on video.

Bills players have regularly mentioned Dorsey’s ultra-competitive nature since he was promoted from quarterbacks coach to take over as offensive coordinator to replace Brian Daboll, who was hired to coach the New York Giants in January.

Receiver Gabe Davis in June referred to Dorsey as having a “huge personality,” saying players favored him moving from the sideline to the coaches booth.

Center Mitch Morse described Dorsey’s eruptions as “the Holy Spirit can come out of him.”

“It’s funny at times, but at the same time, you don’t want to be on the other end of it because it can be ruthless,” Morse said. “It’s never malice. It’s just he wants us to succeed so badly.”

Dorsey previously dismissed questions about his volatile personality by calling the descriptions exaggerated.

In August, Dorsey joked about his reputation when discussing whether he might risk being penalized while being on the sideline rather than in the booth.

“I’d like to think I’m not too much of a psychopath. Like, I feel like I’m being made out to be one,” he said with a laugh.

“But no, I mean, look, it’s a passionate game. ... So I get it. It’s just going to be one of those things, I want to do what’s best for the team and what's best for me calling it,” Dorsey added. “But it probably wouldn’t hurt to be up in the box in that regard.”

Dorsey is in his 11th NFL season as a coach, and fourth in Buffalo. He’s best known for a college career in which he was a two-time Heisman Trophy finalist while posting a 38-2 record and helping Miami win the 2001 season national championship.