Broncos waive 2nd veteran who got hurt training on his own 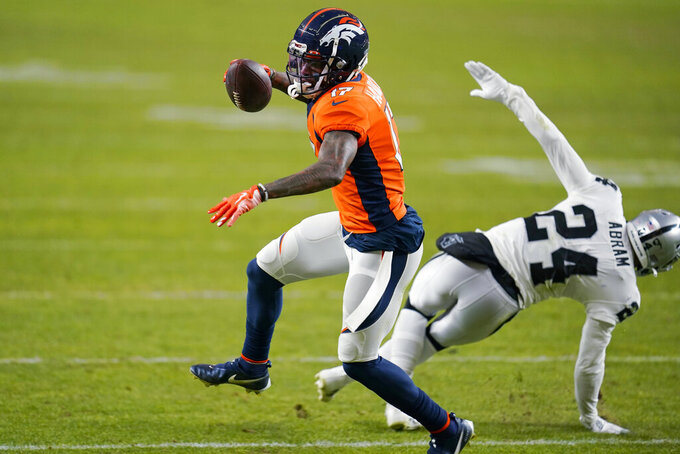 ENGLEWOOD, Colo. (AP) — The Denver Broncos waived receiver DaeSean Hamilton on Tuesday, four days after he seriously injured a knee while working out on his own.

The former Penn State star was the second Broncos veteran to suffer a season-ending injury while boycotting the team's voluntary offseason program at their union's urging.

Hamilton tore an ACL on Friday, the same day the Broncos cut Ja’Wuan James, whom they had placed on the reserve/non-football injury list after the right tackle tore an Achilles tendon while working out away from the team’s headquarters earlier this month.

The Broncos aren't obligated to pay either of their salaries — $10.58 million for James and about $2.18 million for Hamilton — because they got hurt off site.

That's a point the NFL’s management council reiterated in a memo last week to all team executives and head coaches following James' injury, a move that angered the NFL Players Association.

Hamilton’s injury came just as the Broncos were trying to trade the fourth-year receiver, who has five career TD catches and who is buried in a deep position group that features Courtland Sutton, Jerry Jeudy, KJ Hamler and Tim Patrick.

The injuries have put the Broncos at the center of a simmering dispute between the league and the players union.

About 75 Broncos are participating in this week's Phase II training, which allows for on-field coaching and on-field work but no contact. The final phase begins next week and runs through mid-June and includes OTAs and a three-day mandatory minicamp.

In a memo to all team executives and head coaches, the NFL's management council reiterated the policy, which was collectively bargained, and encouraged teams to “remind players of the significant injury-related protection provided if they choose to work out at the club facility and the risks they undertake in choosing to train in non-NFL locations.”