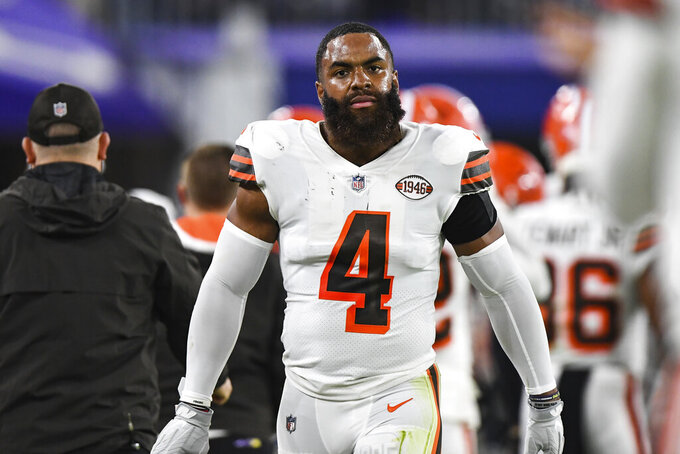 FILE - Cleveland Browns linebacker Anthony Walker Jr. looks on from the sideline during the first half of an NFL football game against the Baltimore Ravens, Nov. 28, 2021, in Baltimore. The Browns placed Walker Jr. and punter Jamie Gillan on the reserve-COVID-19 list on Thursday, Dec. 9, 2021 in advance of Sunday's key matchup against the Baltimore Ravens. (AP Photo/Terrance Williams, file)

BEREA, Ohio (AP) — Anthony Walker Jr. might not be able to help the Browns chase around Lamar Jackson on Sunday.

Cleveland's leading tackler was placed on the reserve-COVID-19 list on Thursday along with punter Jamie Gillan, and both will likely miss this week's vital matchup against Jackson and the AFC North-leading Baltimore Ravens.

Walker and Gillan join tight end David Njoku, who leads the team in yards receiving, on the COVID-19 list. Njoku was placed on the list earlier this week and his status for this week's game remains unclear.

The probable losses of Walker and Gillan are a significant blow to the Browns (6-6), who trail the Ravens (8-4) by two games in the division and can't afford another loss as they try to make the playoffs for the second year in a row.

Any vaccinated player on the list has to be asymptomatic and twice test negative in a 24-hour span to be eligible to play. The latest a team can activate a player from the list is Saturday at 4 p.m.

Walker leads the Browns with 85 tackles in nine games and has been a steadying presence in his first season with Cleveland. Two weeks ago, he helped the Browns contain Jackson, who threw four interceptions in Baltimore's 16-10 win.

Malcolm Smith will probably take Walker's spot with reserve Elijah Lee getting more snaps. It's possible Jacob Phillips could be called upon after missing the first 12 games with a torn biceps. He was designated for return on Monday and has practiced.

“We have good depth at the position,” defensive coordinator Joe Woods said. “I just feel comfortable with the guys we’ll have available."

Gillan, who also holds on field goals and extra points, has had a rough third season with Cleveland. He's ranked 30th in the NFL, averaging just 43.9 yards per punt. He averaged 46.2 as a rookie and 44.0 last year.

"The timing is important, handling snaps in cold weather, windy weather, that type of thing,” Priefer said. “So you’re hoping whoever we sign has some experience in cold and windy weather.”